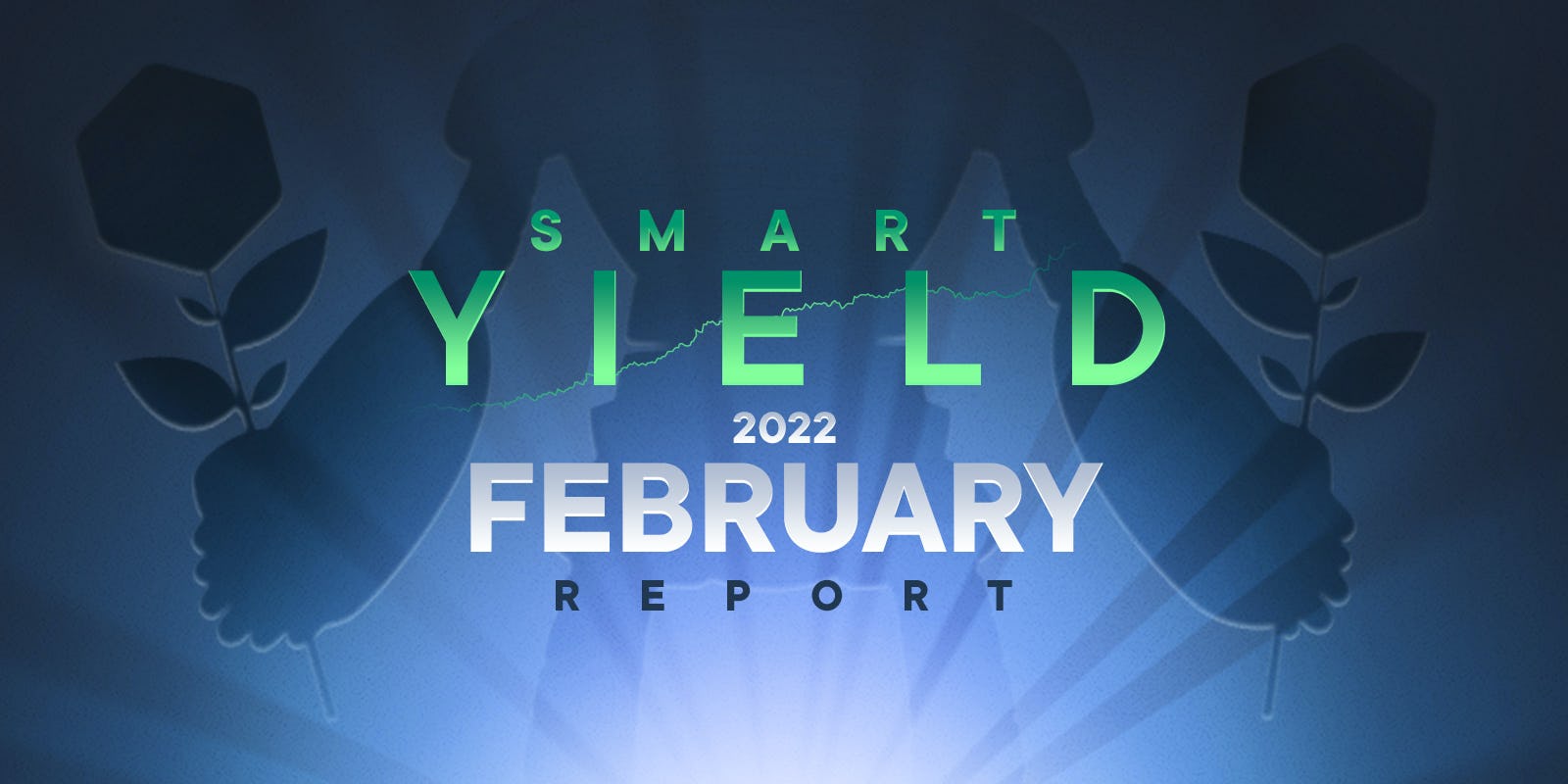 Total value locked (TVL) in DeFi denominated in ETH largely remained stagnant throughout February, mirroring the price action of the crypto markets. Investors seem satisfied to park their assets in yield generating platforms before making speculative decisions once markets indicate a strong trending direction. Though it may seem like markets are in a bearish period (and it may well be), it has been range-bound since the beginning of January. This is in the face of various macroeconomic factors such as higher than expected inflation in the US prompting (talks of) tightening monetary policy. This would suggest a risk-off sentiment, though can also have a positive narrative for the crypto market; Bitcoin being a hedge against inflation. However, it is clear that actual sentiment in the market has been of fear (as quantified by various social metrics).

The result is uncertainty, and this is best reflected in the launch of Solidly towards the end of February. Last month we mentioned how the platform’s pre-launch phase attracted $8 billion in TVL to the Fantom network. After days of the full launch, Solidly amassed over $1.5 billion in TVL, though this was not without hiccups. Specific elements did not function as intended, and there were economic loopholes which could be exploited, namely by a single entity being able to double their token amount by voting for their own liquidity pools. This led to many being underwhelmed by an over-hyped project, with losses to follow from falling token prices. The lead developer (Andre Cronje) has also since ‘quit’ developing in DeFi, leading many projects he was associated with to fall in valuation, both in token prices and TVL. This is likely a knee-jerk reaction, as all of these projects have full-time development teams with no recent contribution having been made by Andre Cronje. This has resulted in some of these platforms giving higher than average APRs.

Things have been relatively quiet on the security front. After the Wormhole bridge hack last month, another bridge (Meter.io) was exploited for ~$4.5 million. Two more exploits occurred in February, each approximately $10 million in value. However, this is a relatively small amount compared to what we have seen previously, though even this ‘background noise’ level of exploits is to the tune of millions of dollars per month, and something investors should be aware of.

The following table summarizes the shares of the portfolio in February. It was relatively stable, but the EURT continues to be a very attractive yield portfolio for users. Some growth comes from users trying to diversify their stablecoin portfolios, while others are fleeing what is likely to be a bear market. Additionally, its APY was higher at the beginning of the month than other stablecoins due to particularly good rates on Convex. Around the middle of the month, it stabilized at the same rates as USD stablecoins. The BNB rate continued to see increases due to fluctuating demand on Venus, linked to Binance Launchpads. 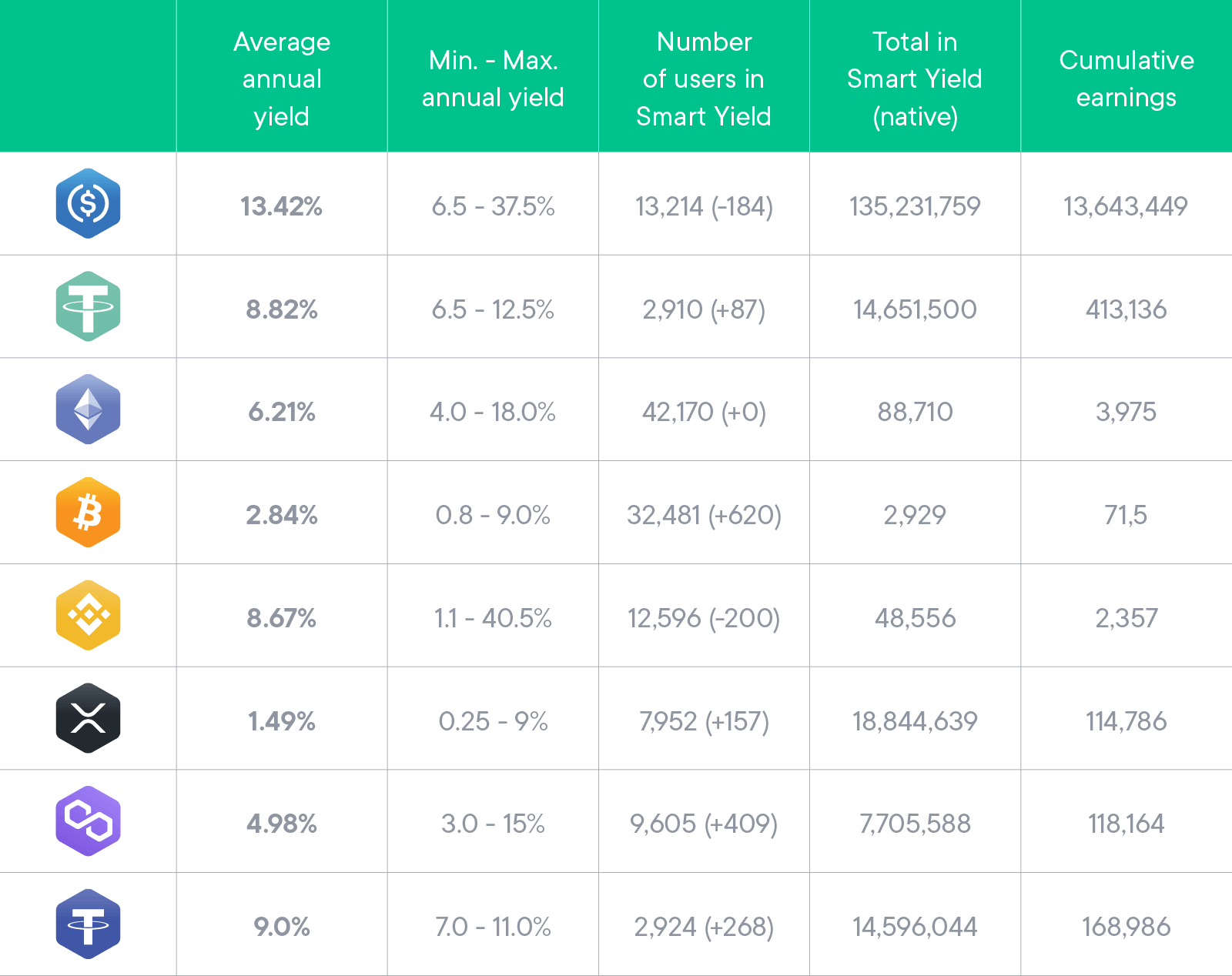 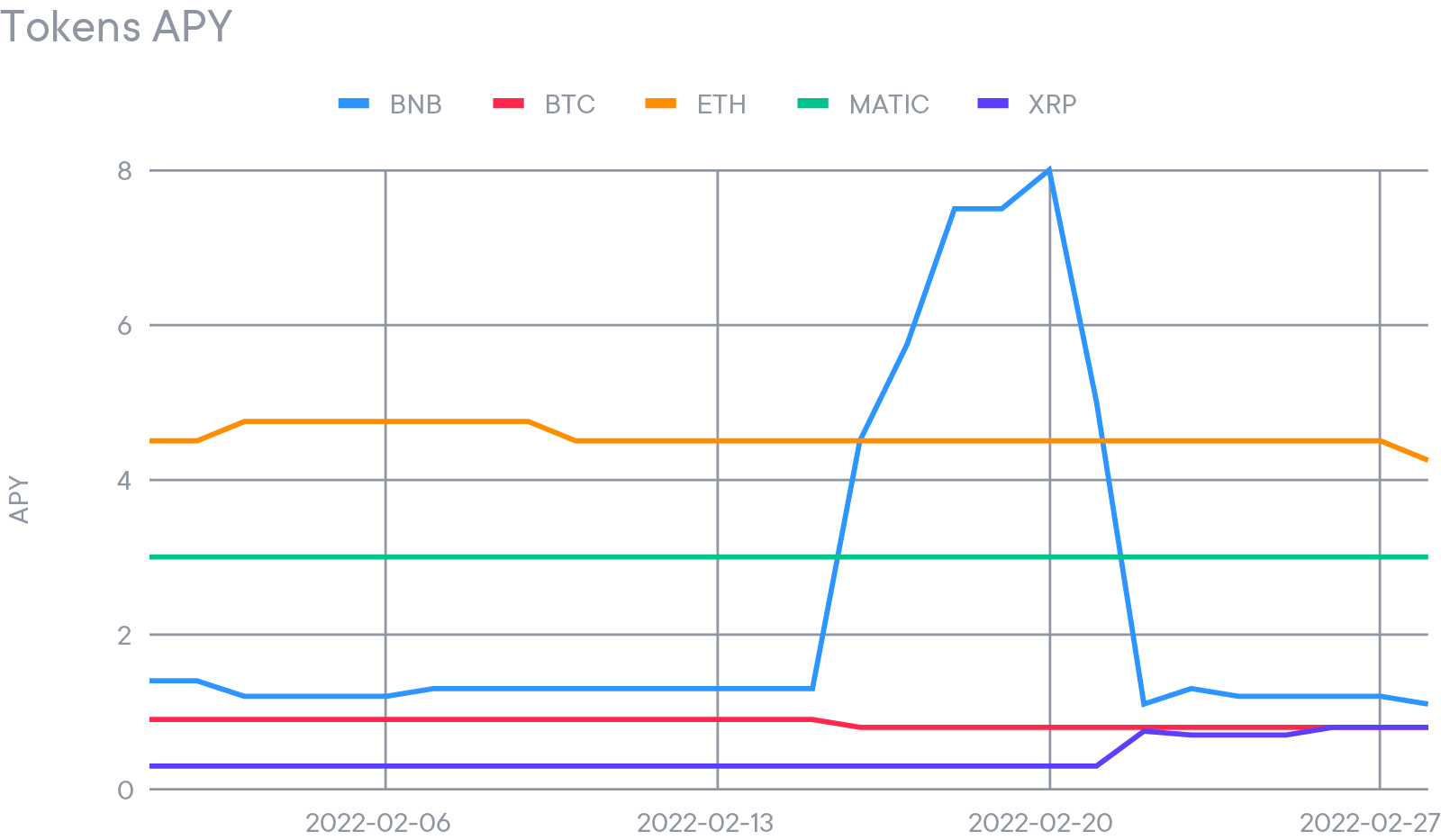 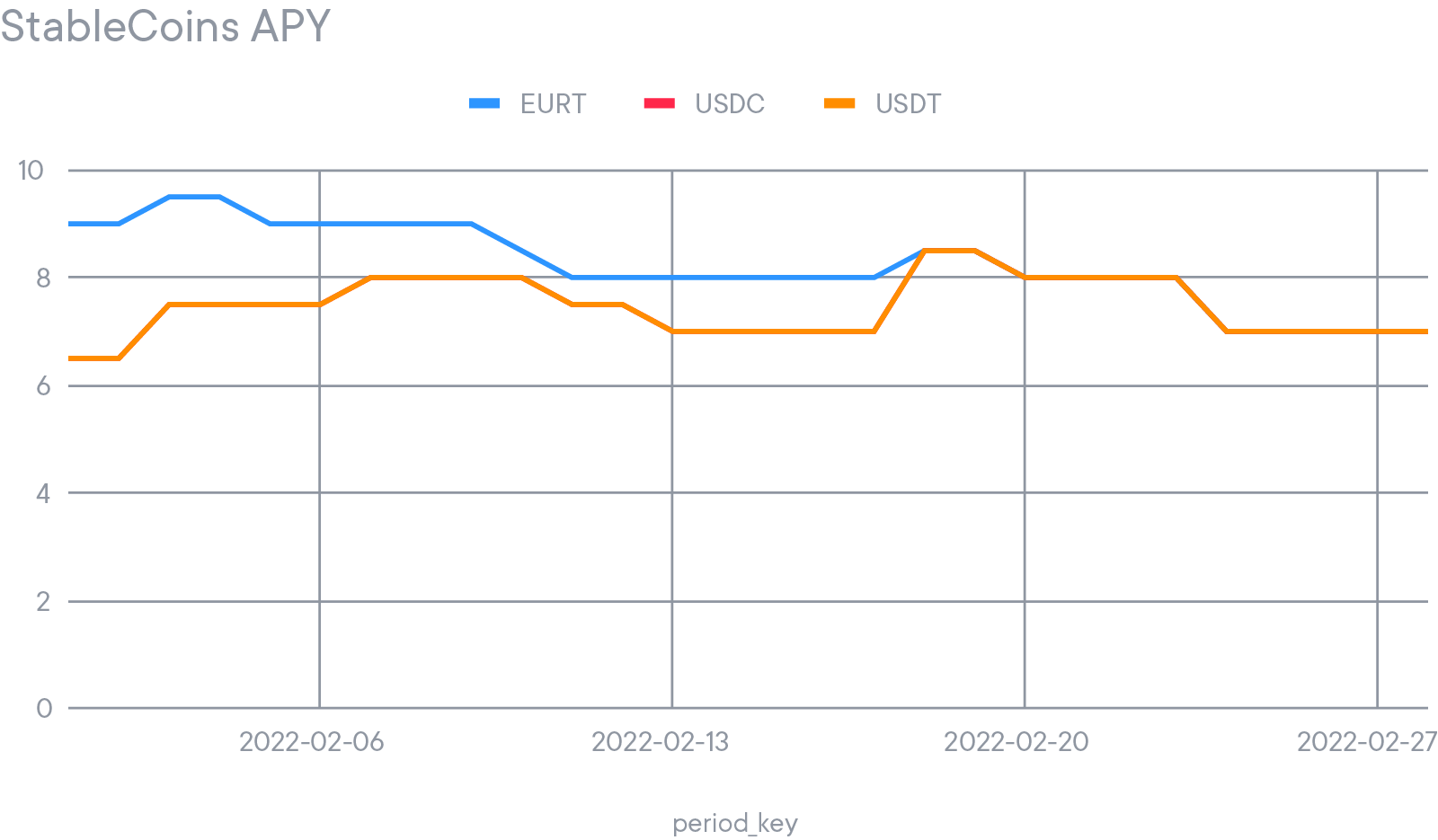 The major change of allocation happened on stable coins where the yield on Convex dropped. Stable coins have seen their yield rate going down on Ethereum while it remained high on the Avalanche version of Curve. 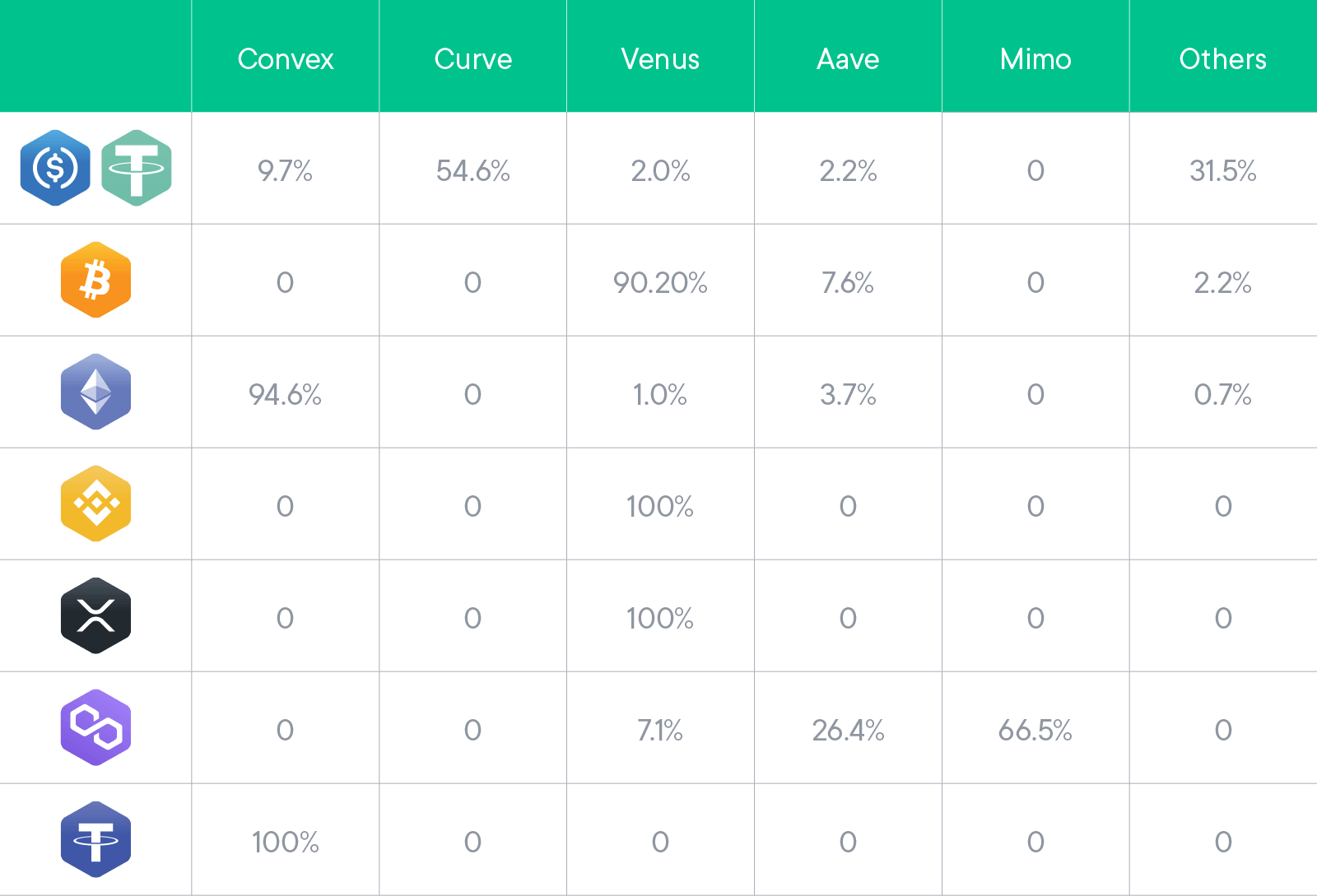