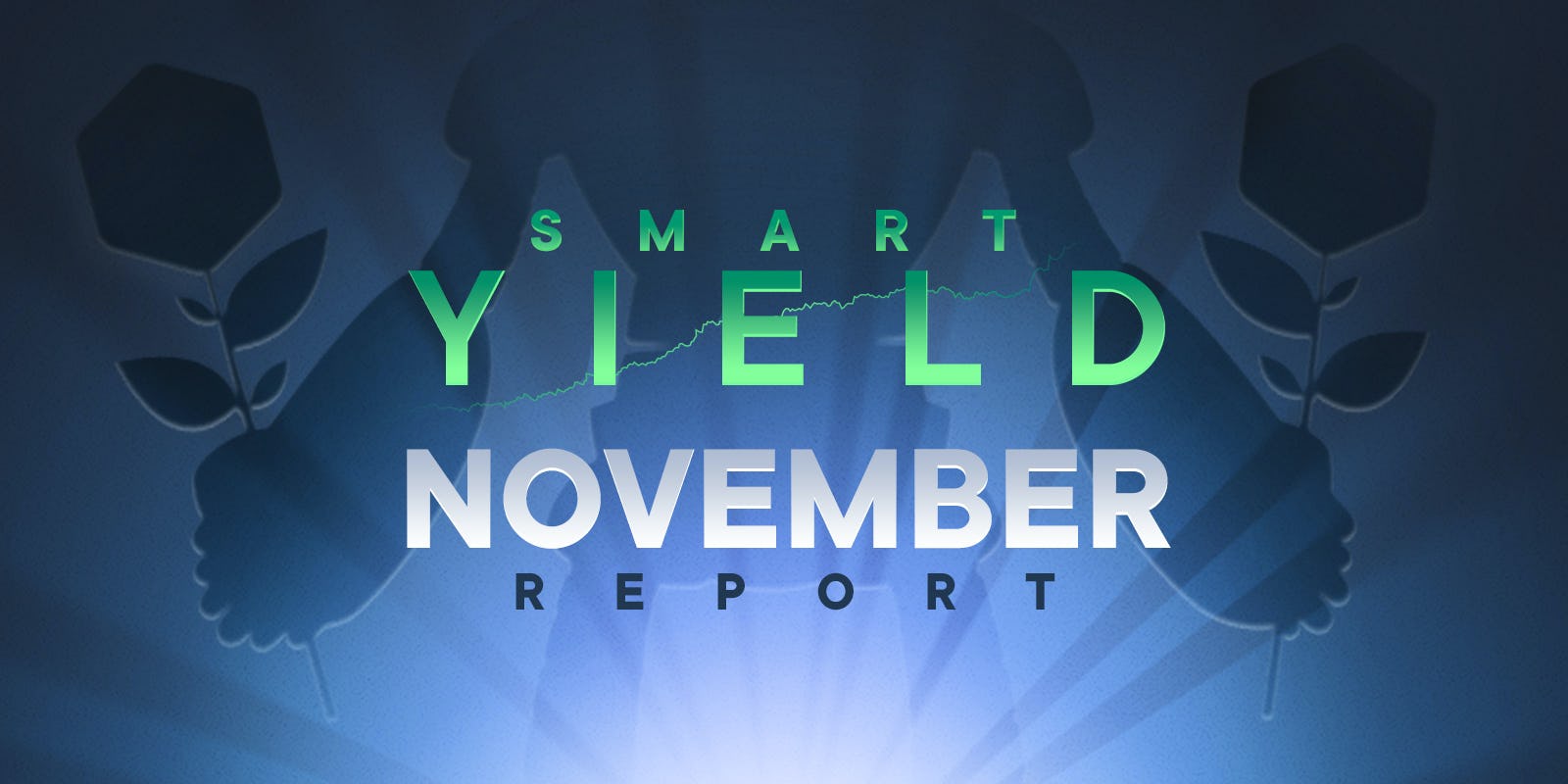 The content of this report will be subject to change based on your feedback and the evolution of the information we receive.

Having made an all-time-high in October, Bitcoin repeated this feat by making another ATH in November. However, this was short lived and the latter half of the month saw retreating price action, giving an overall declining month across the crypto market. Value in DeFi has remained constant over the month, and has kept its TVL near the highs of ~$260 billion across all chains. Competition between chains has taken an interesting turn with the emergence of the Terra ecosystem. The ecosystem has been growing for the past several months, though has recently surpassed Solana and is on par with Avalanche in TVL.

Terra is built with interoperability as one of its core features. Blockchains today are isolated and very different architectures, with bridges connecting them. Terra is built on Tendermint Core technology, which takes a more modular approach. dApps built in the Terra ecosystem are free to configure their own blockchains, while at the same time being able to speak with other chains within the Terra ecosystem through a unified interface. The appeal is reflected in the market, with the Terra USD (UST) stablecoin reaching a market cap equal to DAI, with significant growth occurring in the past week. We foresee interesting opportunities for our Smart Yield in the coming months.

There has been a new flavour in DeFi in recent months under the label of “DeFi 2.0”. The distinguishing feature of this category is protocol-owned liquidity. Where pioneers of DeFi such as Uniswap and Aave rely on ‘renting’ liquidity from DeFi users (through incentivised yield farming), DeFi 2.0 attempts to ‘buy’ the liquidity outright. The best example for this is OlympusDAO. It was released earlier this year, though has recently caught the attention of the market as several forks have cropped up in the past couple of months. Currently there are no platforms with protocol-owned liquidity in its core design that are suitable for our Smart Yield, though we imagine the first DEX/lending protocol with such principles to be very successful. DeFi 2.0 is an interesting trend, and something to be monitored in the coming months.

Despite the lowest adoption in terms of number of users in the stablecoin yield wallets, the total amount added was the highest in those same wallets. November was a highly volatile month with new all-time highs for many cryptos as well as sharp drops. This may have affected holders of ETH and BTC which preferred to reduce their amount in the Smart Yield and trade along with price actions.

The yield offered for USDC is still the same as USDT but has been surpassed by EURT. The EURT wallet has more than doubled its value within that month with many new users joining it. 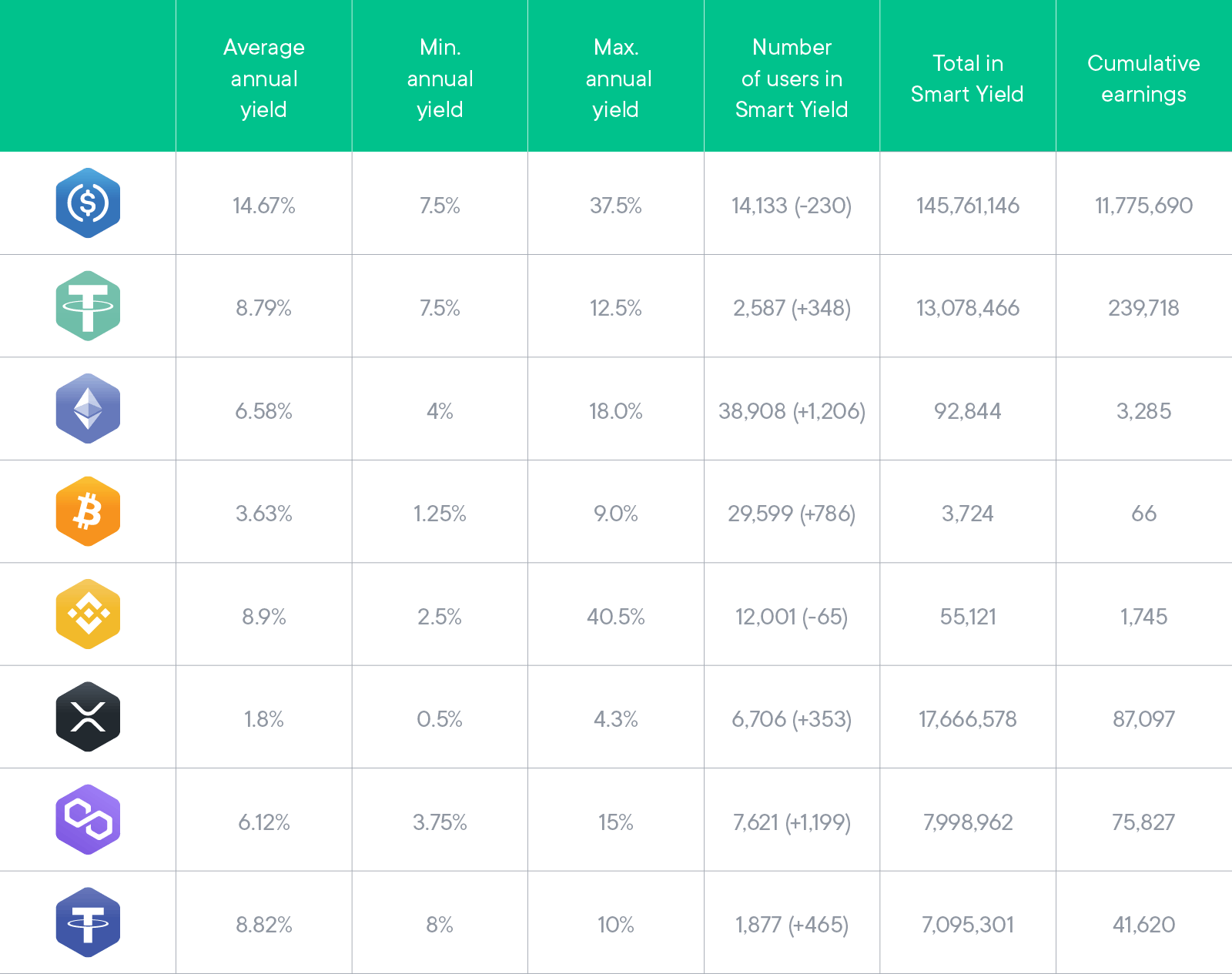 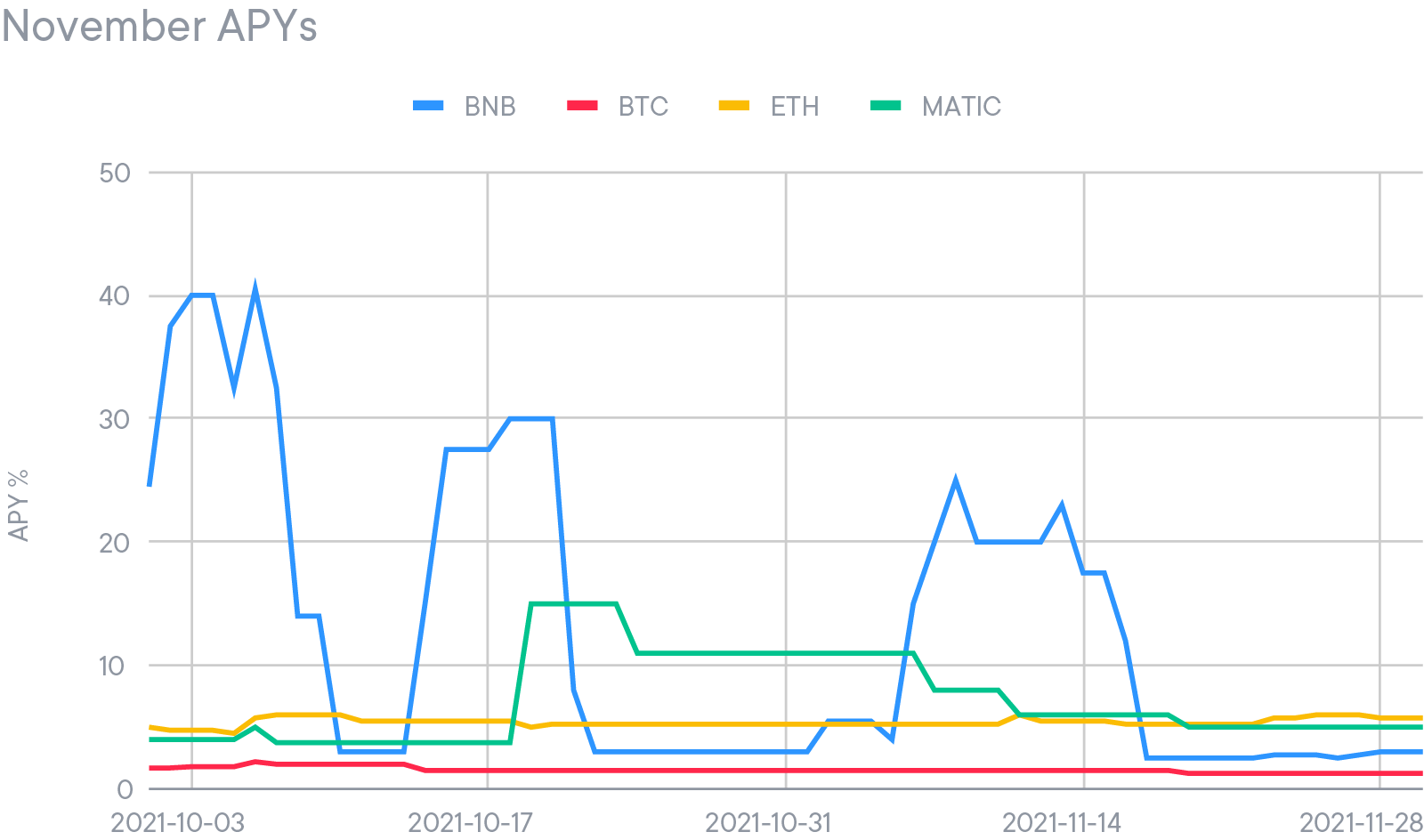 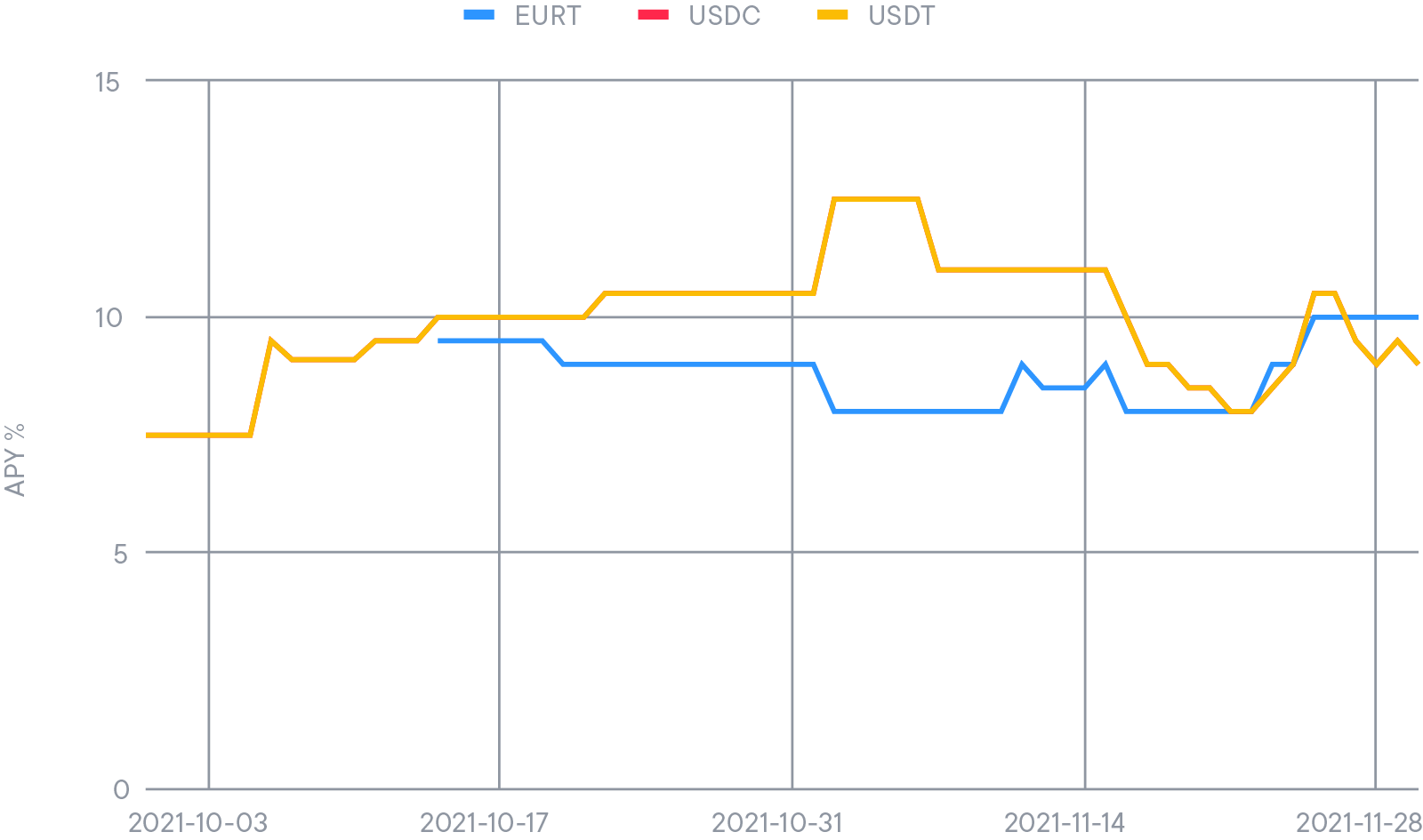 As mentioned in previous reports, the strategy optimiser is now allocating funds exclusively to blue chip projects. These are:

Convex was the most lucrative platform for ETH,  USDC and USDT. The Smart Yield optimiser redirected most of the other tokens to Venus, which had a particularly good rate for BNB. We noticed that this phenomena is happening when there is a high demand for BNB, and massive borrowing on Venus (more than $467M at the time of writing). A proportion of this “borrowing pressure” is due to launchpads on Binance. 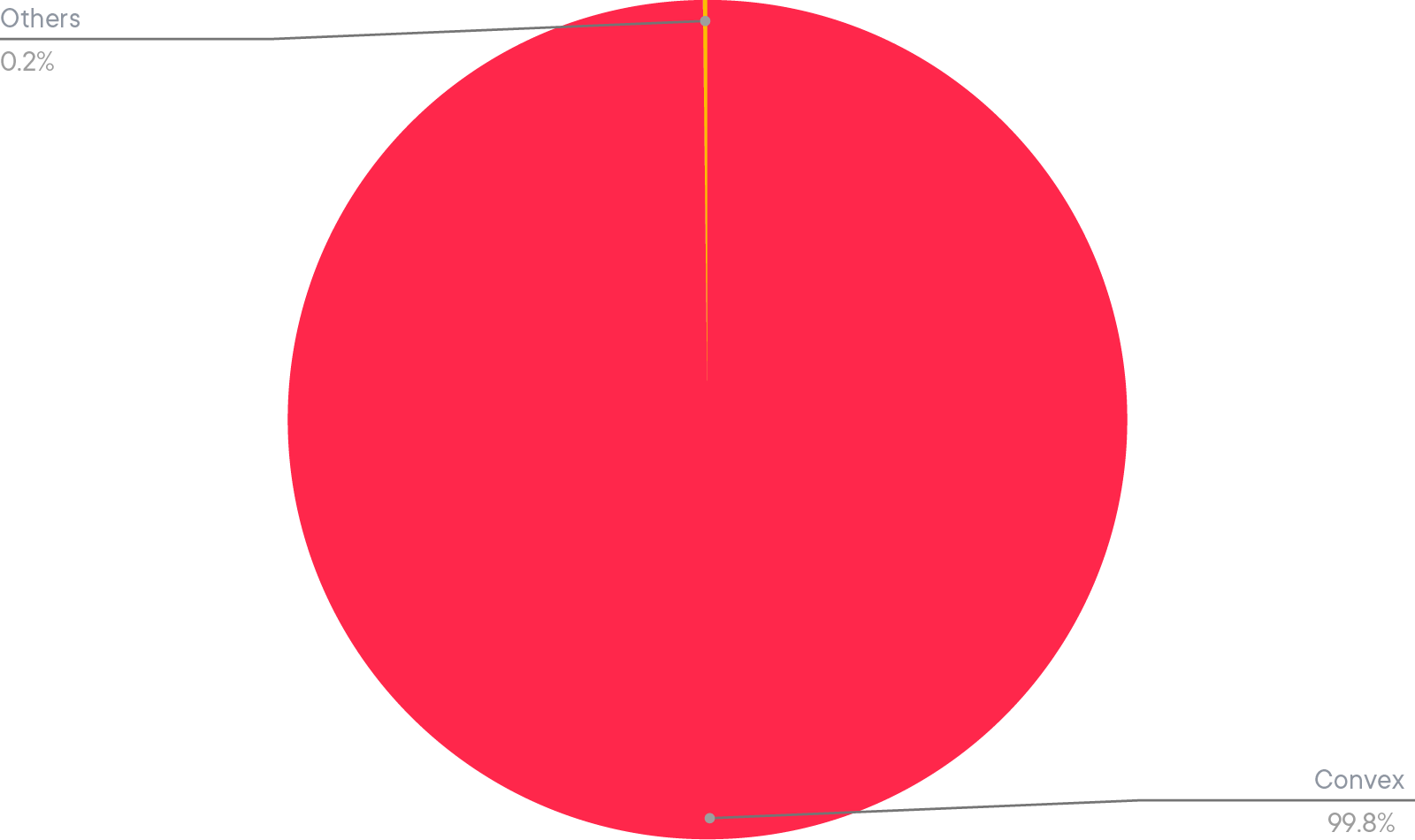 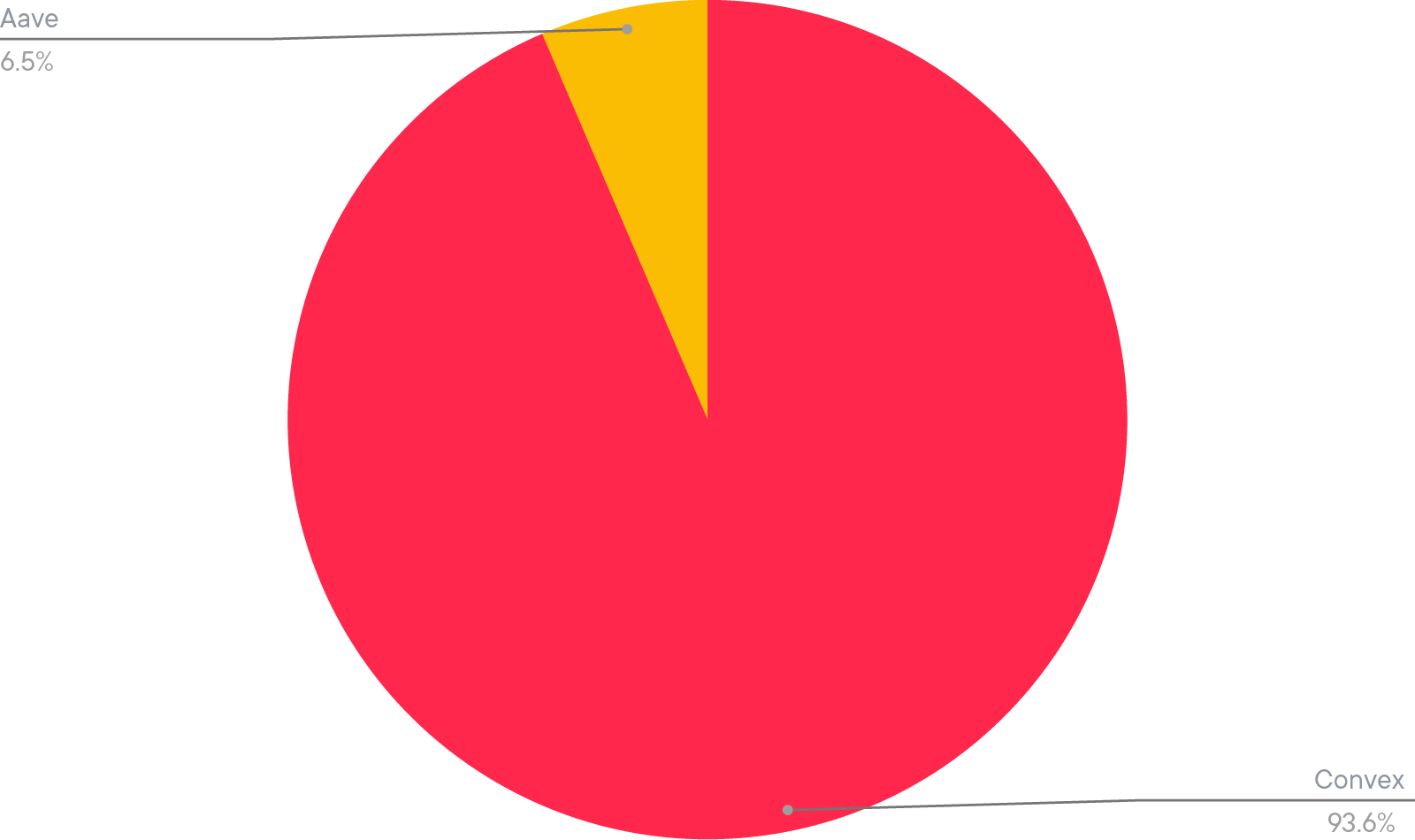 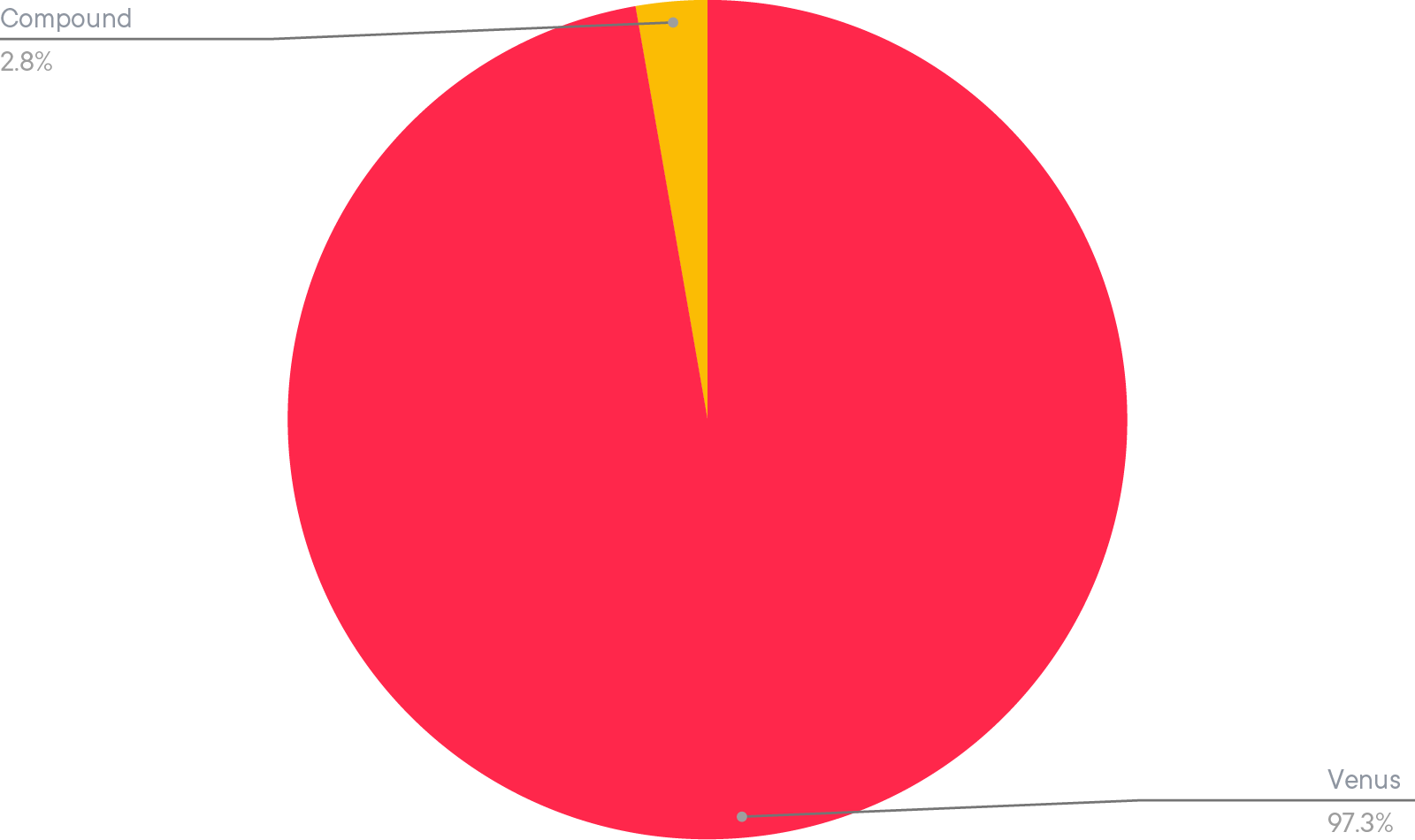 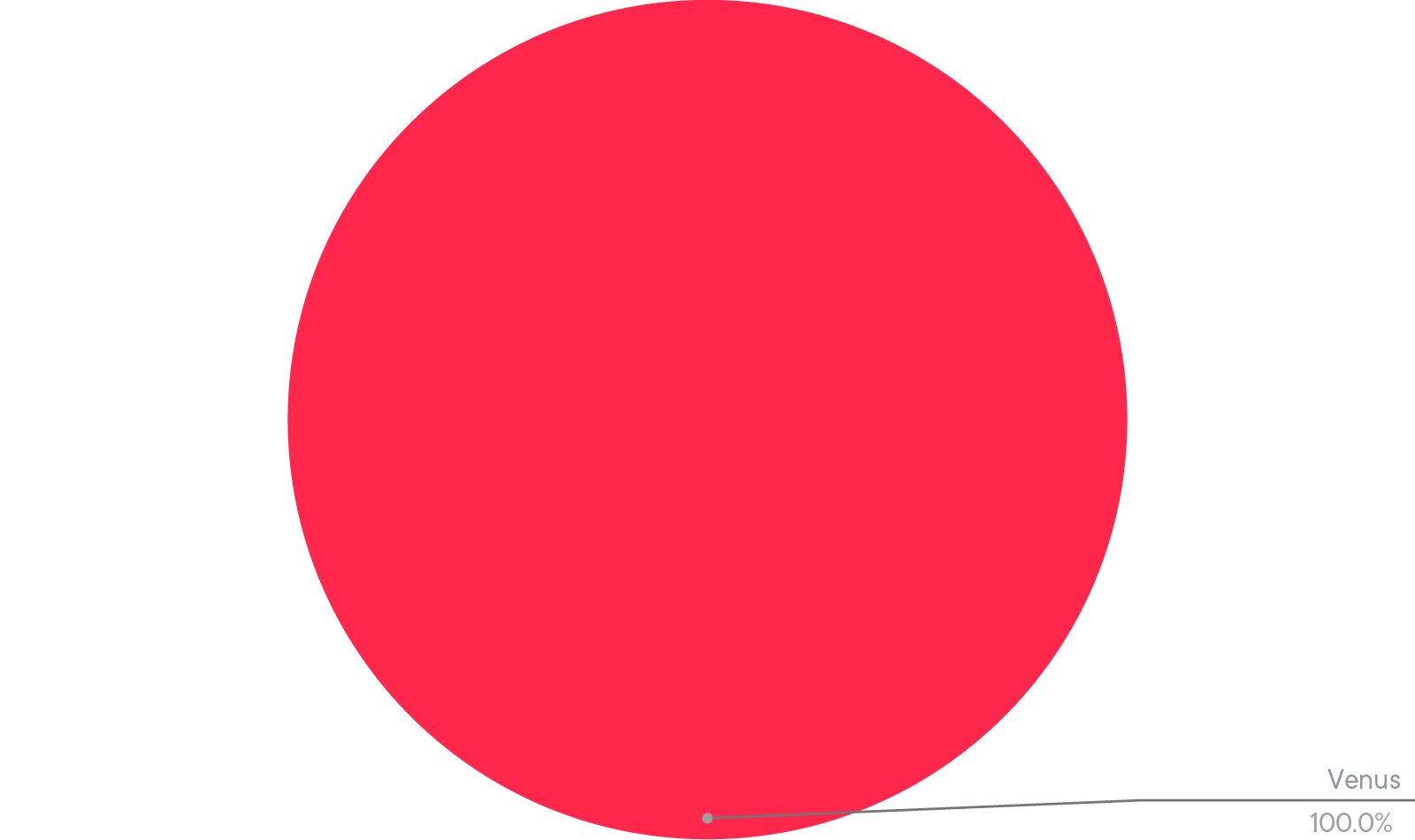 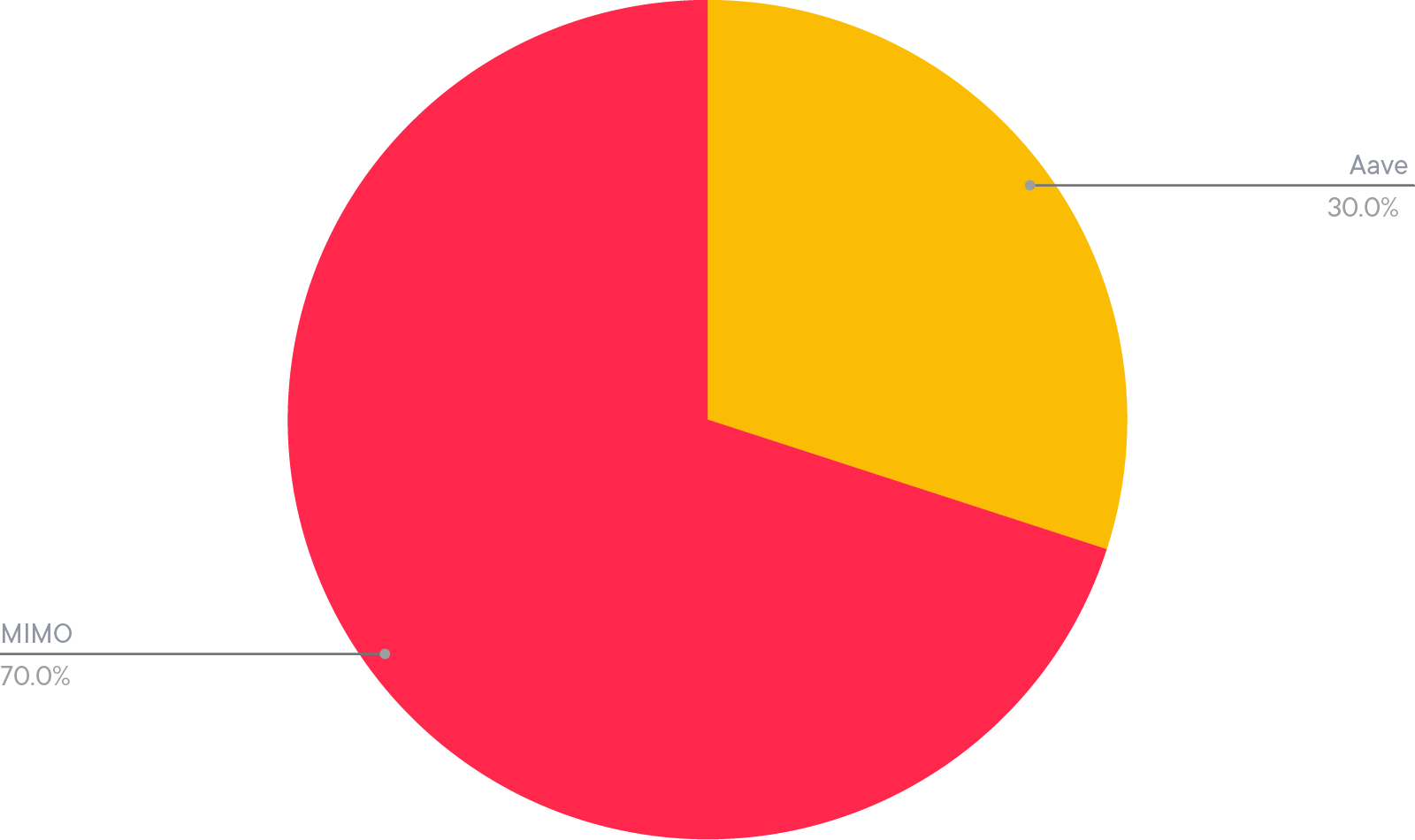 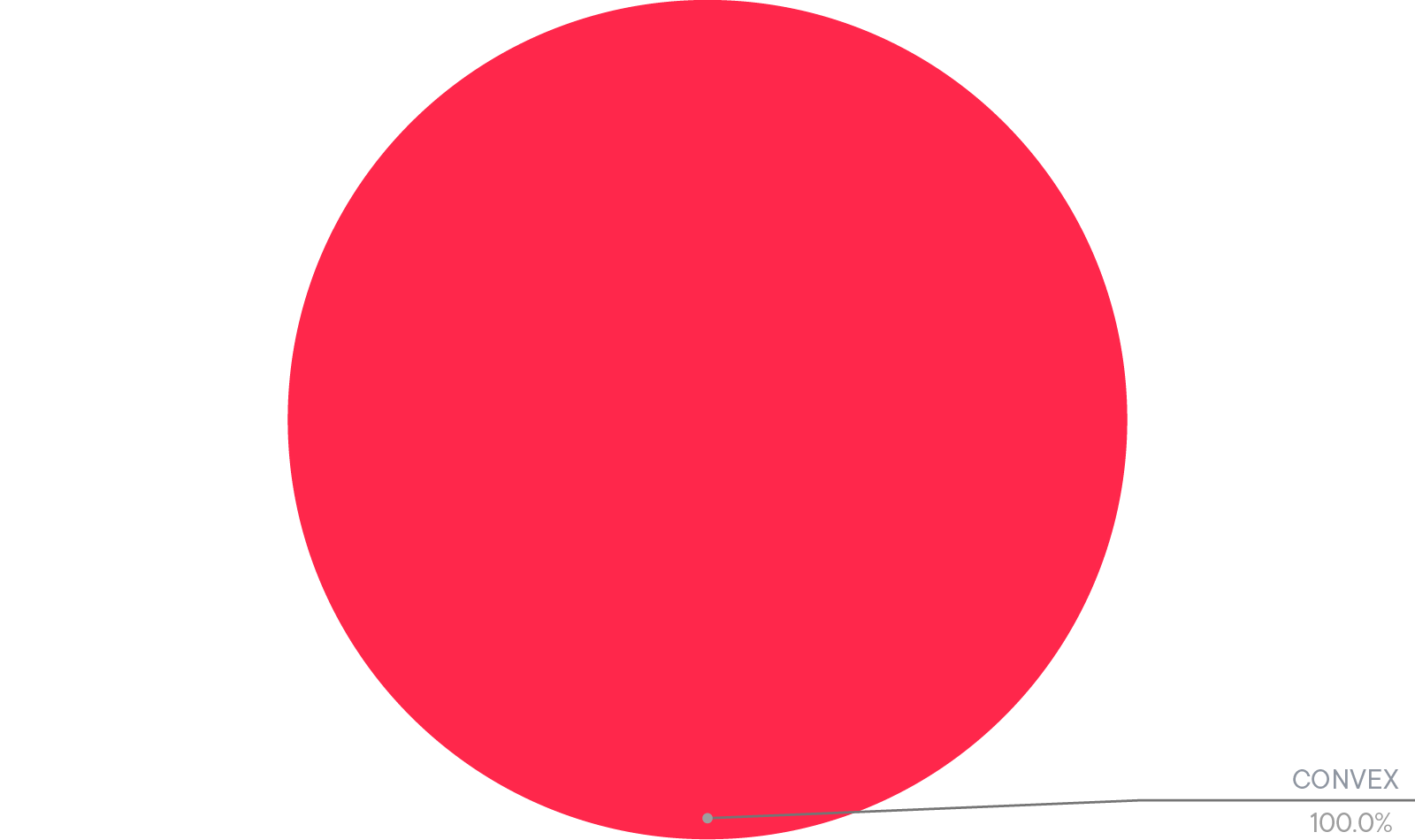 As discussed previously, the funding of the Safety Net has been stopped. The static Safety Net is still available in case it is needed, and it’s value will grow with the value of CHSB.