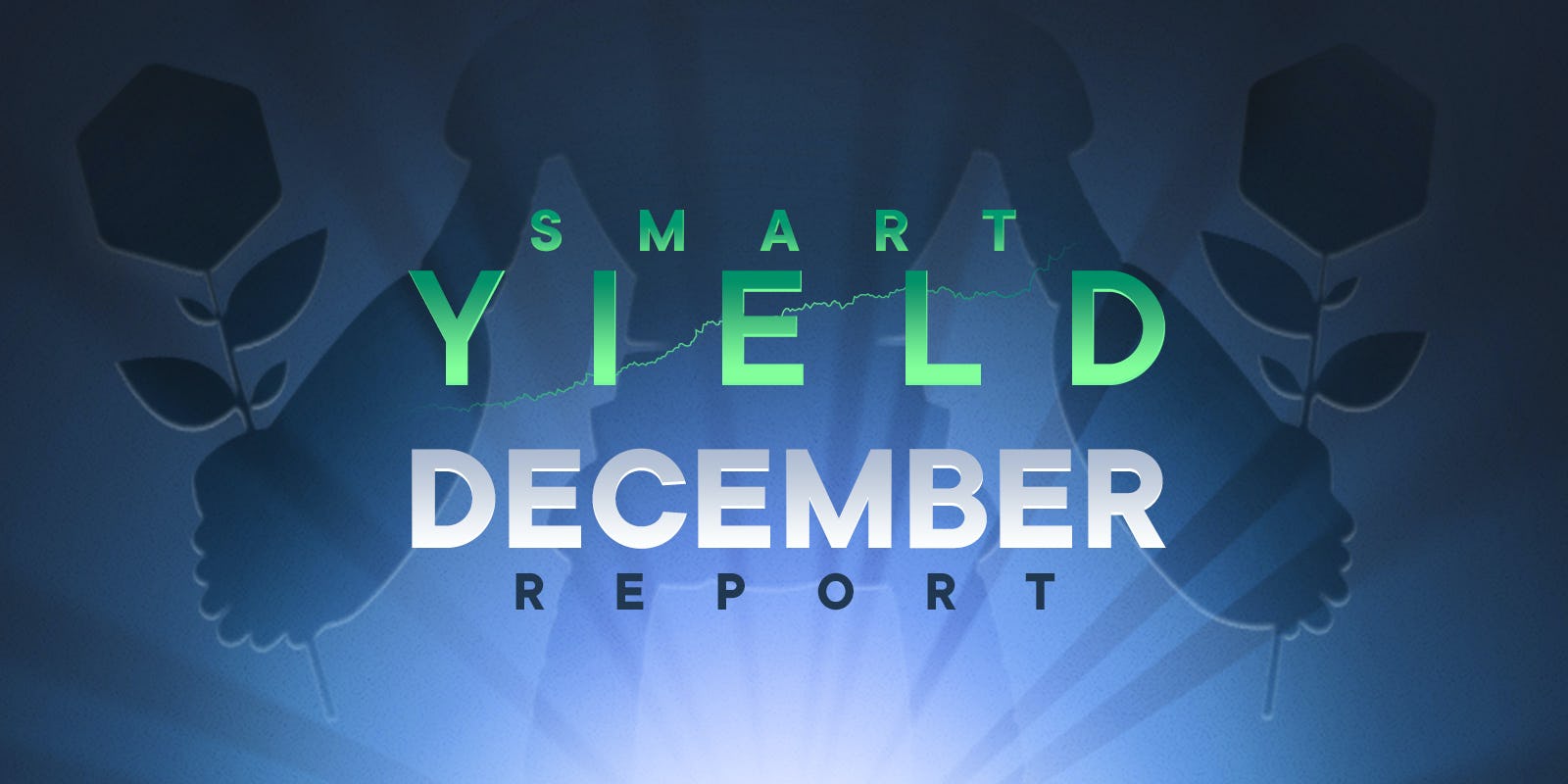 The content of this report will be subject to change based on your feedback and the evolution of the information we receive. This month, the report has been cleared of overwhelming graphs and a new table has replaced them.

With the end of the year, it’s useful to step back and appreciate how much DeFi has grown over 2021. TVL has increased by 10-fold, where the beginning of the year held a modest $23 billion largely across only two chains (Ethereum and Binance Smart Chain). The current total TVL in DeFi is upwards of $230 billion, with the top five chains holding above $10 billion each.

Summer 2020 rightfully retains the title of ‘DeFi summer’, being recognised for going from less than 4 million ETH to above 30 million ETH in TVL. The beginning of 2021 pushed this to above 45 million ETH, and was also a bullish period in the market. The year also marks the first time of both significant volume in DeFi TVL and significant trading volume/price action in the market, and we see an interesting correlation between the two.

July was a local low in the market in terms of price, with November seeing all-time highs. For TVL in DeFi denominated in ETH, July was an all-time high and November saw deposit amounts on the lower side. Current price action is also toward the lows, and we see the same inverse relationship where ETH TVL is again at an all time high. It is too early to determine any consistent correlations, though this could indicate an interesting market psychology (at least during a general bull phase of a macro-cycle). Appreciating price action shows either a willingness to trade for additional returns, or can also show profit taking. Downward price action is more straightforward, and shows a risk-off approach where participants are satisfied with passive income through DeFi. The latter shows that even during bearish periods, many stay ‘in crypto’ and look for passive returns.

We mentioned that the TVL currently sits at $230 billion spread across several chains. However, almost $150 billion of this still remains on Ethereum. The year has seen several new chains enter the space, with a few being layer 2 solutions for Ethereum. None of them have managed to come close to matching Ethereum’s TVL and shows that first mover advantage is still playing a large factor in Ethereum’s dominance, even with the high gas fees. It is likely that this will remain the case until an application which can naturally attract a large number of users is deployed on a chain other than Ethereum. The keyword here is “naturally”, where users would interact with the application because it fills a need (gaming is the most obvious example of this) as opposed to incentivised yielding programs.

The following table summarises the wallet actions in December. The number of users keeps increasing on all but one asset, USDC. On the other hand, all non-stable coins (except XRP) saw their total value pledged diminish, meaning that existing users were reducing their exposure to yield wallets (and non-stable crypto in general). XRP’s yield hit a new all time high of 9%, which increased its total amount pledged by more than 15%. 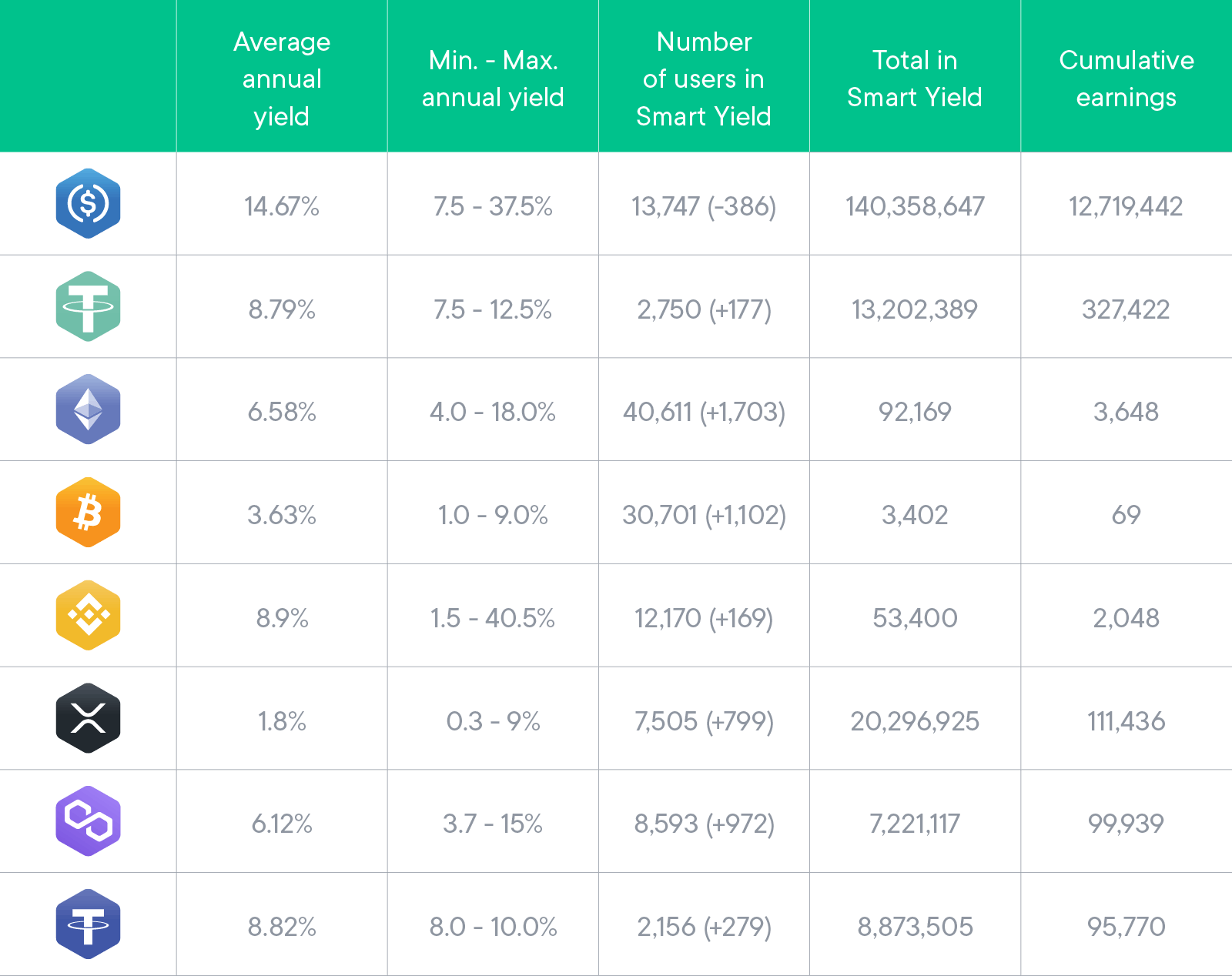 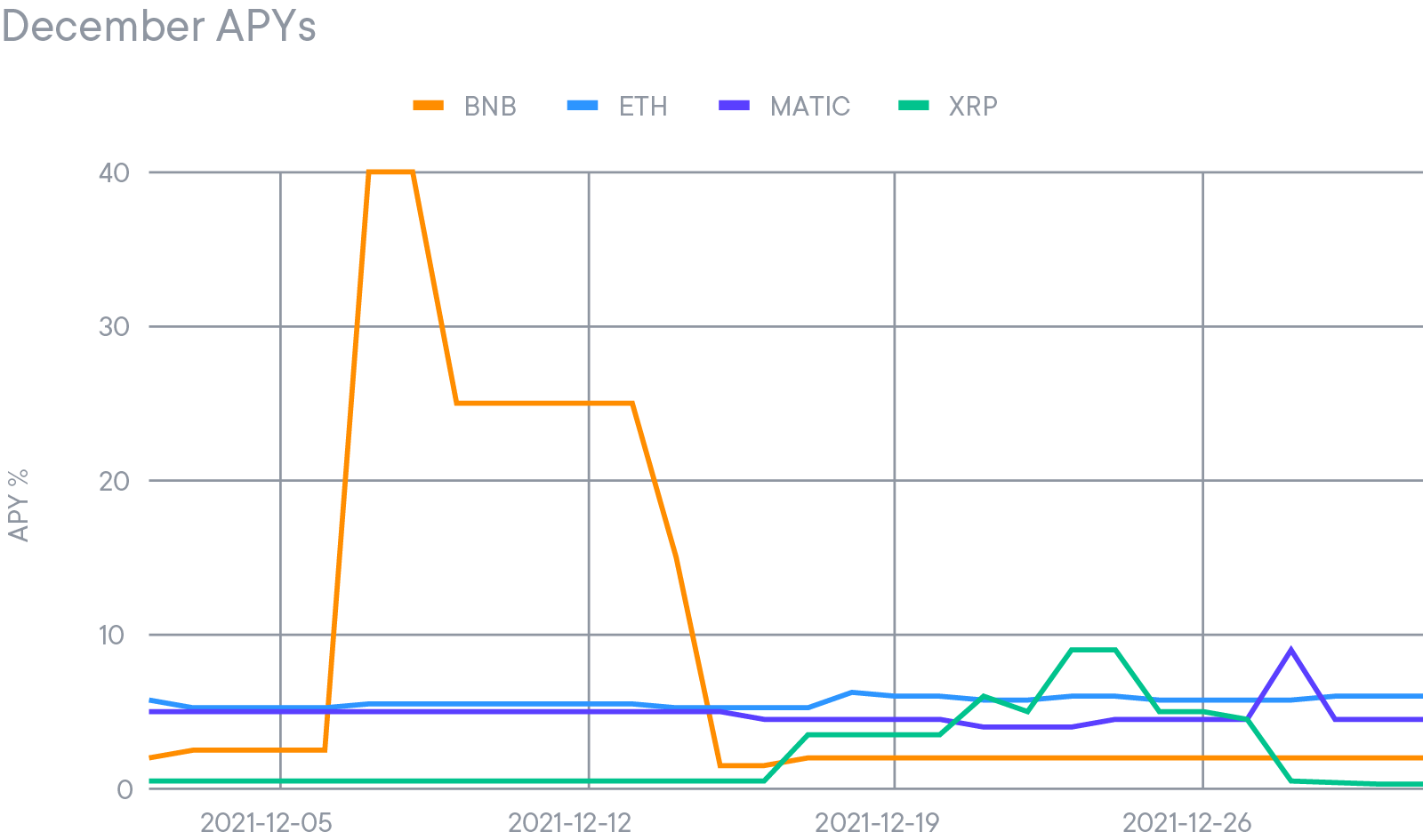 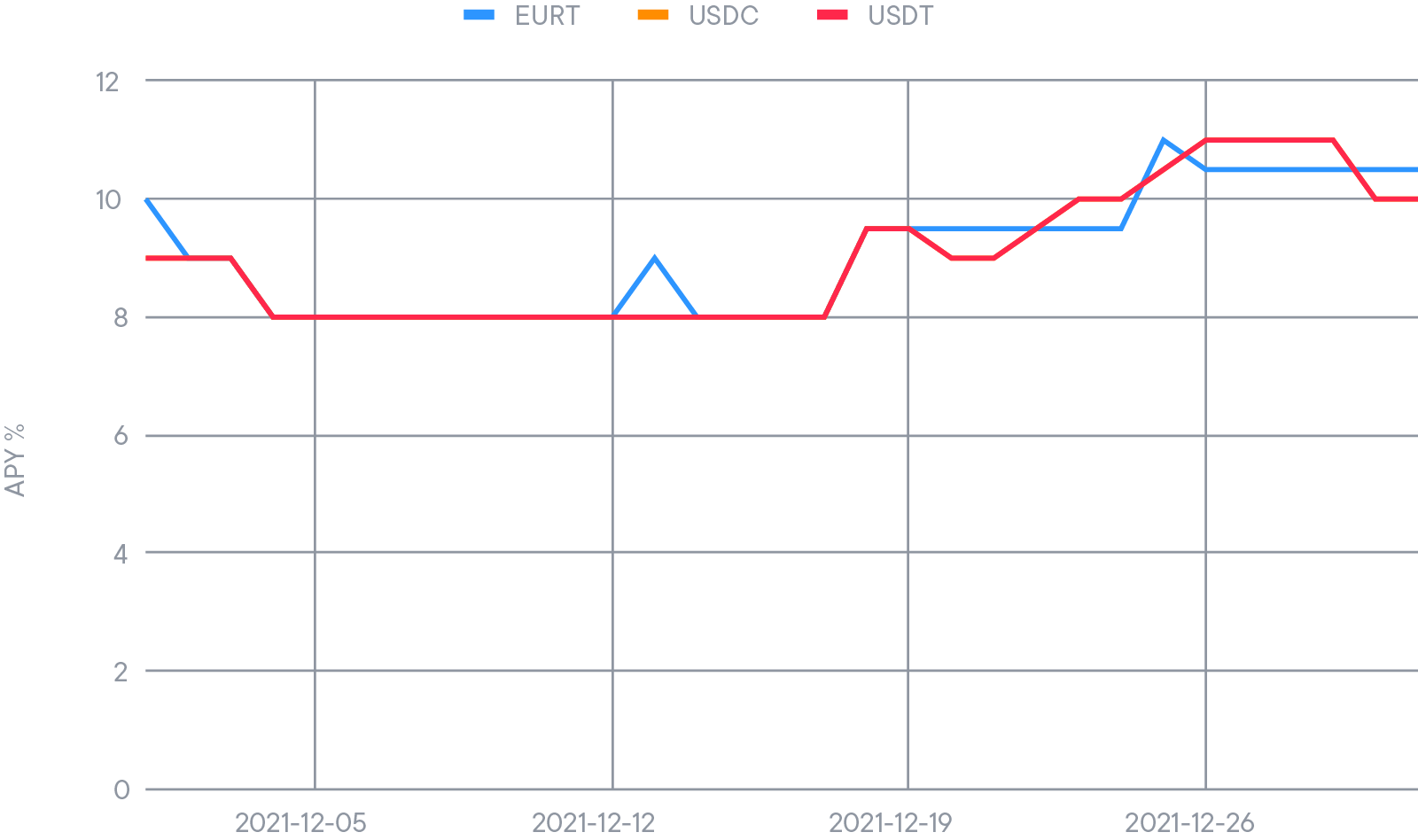 As mentioned in previous reports, the strategy optimiser is now allocating funds exclusively to blue-chip projects. These are:

Due to the reduced number of projects, the usual pie charts have been replaced by a table summarising the allocations of the yield wallets.

The allocation strategy didn’t change throughout the month of December. The platforms used in November gave a very similar yield while staying the best project in terms of risk. XRP was particularly attractive this month thanks to an airdrop for XRP holders, which increased the demand for it and the reward for XRP lenders. 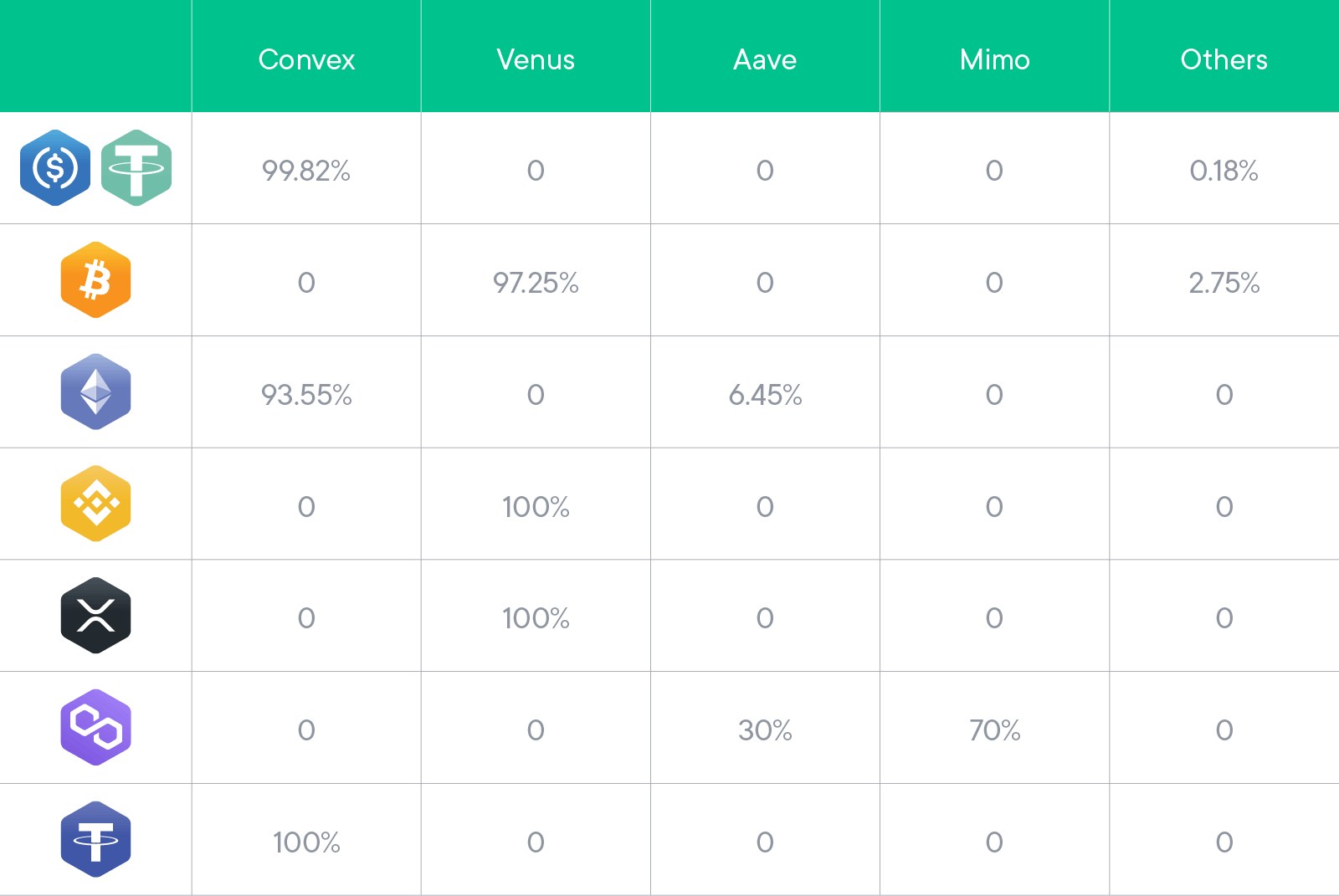