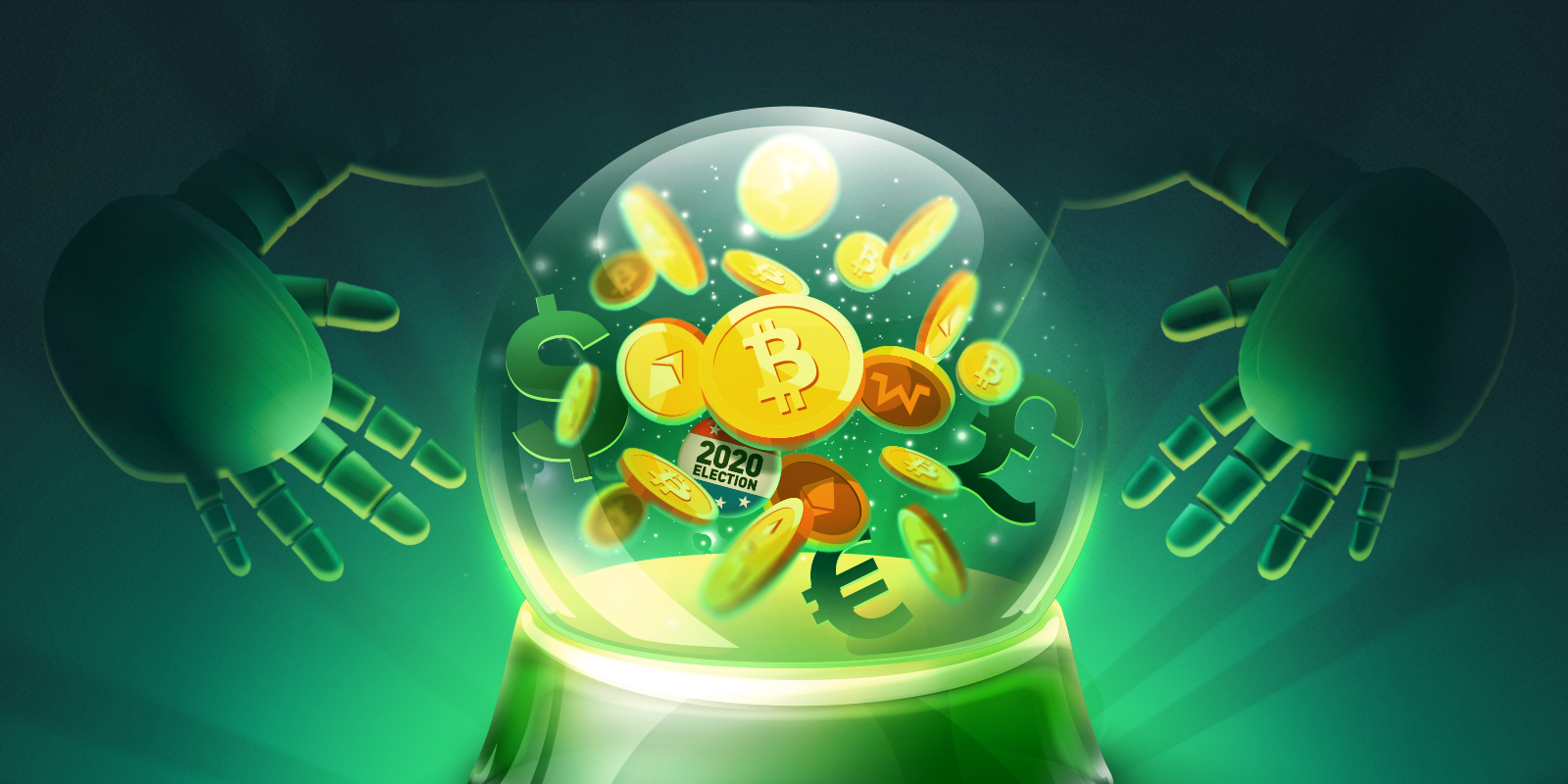 Financial markets have been rife with chatter about the upcoming United States elections and their implications on various assets, including stocks and Bitcoin.

As it happens, the relationship between the cryptoverse and this major US event requires further investigation, given its historical relevance.

Indeed, on the 8th of November 2016, Bitcoin was priced at less than $750 dollars - a price-point that’s hard to fathom by most these days. And in the year after the current US President took office, Bitcoin continued its rally all the way to the soon-to-be-broken all time high at $20,000.

This could mean that US elections have a bearing on Bitcoin to one degree or another, but perhaps not in the way you would think.

In the last election cycle, the S&P 500 experienced volatility during election time. Specifically, during the month of October and the first week of November, the SPX fell over 6%. Just after the election, stocks quickly reversed the trend towards new all-time-highs and never looked back until 2018.

During that same time, Bitcoin’s price seemed indifferent to the event, as it traded just over $600. But once stocks began to rise, the number one cryptocurrency climbed and continued to do so until it reached all time highs in December 2017.

So on the one hand, we have a situation where one could draw a causal correlation between Bitcoin and the US presidential elections by proxy (the stock market).

On the other hand, it could be argued that this correlation is merely a result of unlimited money printing, quantitative easing and stock buybacks. Until 2020 came along, Bitcoin was mostly seen as a speculative asset with a market capitalisation of just over $200 billion. As such, it would make sense for it to tag along with legacy markets like stocks.

However, that perception is no longer clear in a post-covid world. Today, highly reputable publicly listed companies like Square and MicroStrategy have taken the ‘store of value’ argument to the next level, having placed a percentage of their treasury reserves into the crypto for this very reason.

This turn of events lends credence to the idea that the relationship between stocks and Bitcoin could be about change, such that stock-market volatility will no longer have a meaningful impact on Bitcoin. Per the above chart, it seems like a Bitcoiner’s hopes and dreams of a decoupling event could even be on the verge of coming true.

Could this be the moment the cryptoverse has been waiting for? To gain further insight into this question, one must first contextualise the parameters.

Meanwhile, US stimulus talks have spurred on chatter about possible further momentum as both political parties scramble to get the best deal possible.

On March 27th, the Cares Act was signed into law, providing a record-breaking $2.2 trillion in stimulus to virtually every American.

Since the bill was passed into law, Bitcoin, the S&P 500, tech stocks and even gold have more or less climbed in unison, though there’s no guarantee this will continue forever. On the contrary, this correlation is sure to end due to differing fundamentals.

Despite the generous stimulus payments, US companies are downsizing, not expanding. Lockdown measures have brought GDP (gross domestic product) across continents down to levels not seen since the year 2000. In fact, the US economy shrank by nearly 32% in the second quarter of 2020, per data from TradingEconomics. Of course, the US is no outlier; economies in Europe are arguably faring worse.

In plain English, stock market valuations are at all time highs while economic activity tells a different story; and we haven’t even mentioned the millions of people who are now unemployed.

What do the S&P500, US elections and Bitcoin have to do with each other?

US stocks as a political football

While the US economy and stocks go their separate ways, politics continues to play its role.

In political circles, it’s no secret that incumbent US President Donald Trump has taken credit for strong stock-market performance as a means to bolster the Republican campaign, and to perhaps woo investors (retail or otherwise). (If you doubt this, check out Trump’s Twitter page and ‘all time high’ calls.)

While such rhetoric is particularly emphasised by Trump, it’s by no means a one-sided affair. In fact, US stocks have been on an exponential curve since the 2008 recession, whether that was under the Obama or Trump administration.

This lends credence to the thesis that stock market valuations never truly make sense if they’re back-stopped by central banks whenever there’s an economic crunch. During such times, these jubilant prices are fuelled by the US Federal Reserve money printers, which have sunk trillions into financial markets to prop-up valuations amidst an ongoing health crisis.

Of course, no action is without consequence, and the ultimate effect such policies have is a strong and persistent devaluation of the US Dollar.

In spite of this currency devaluation, there is a vested political interest for any US administration to maintain the status-quo irrespective of the economic impact.

To briefly summarise, we have a situation whereby

Bitcoin’s rise as a store of value

Eventually, the chickens will come home to roost, which brings us to the ‘store of value’ argument. Indeed, in a time of heightened uncertainty, the need for an absolute store of value has become more pronounced.

Traditionally, gold is the safe-haven asset investors flock to in times of crisis. But a digital store of value with absolute scarcity seems to be more interesting for today’s tech-savvy investors with little interest in the cumbersome properties of gold.

Since the stimulus launch, gold has risen 40% (from trough to peak), while Bitcoin has surged over 120%. This performance discrepancy becomes even more clear when seen in a 10-year time-frame.

US elections and Bitcoin

While there is no crystal-ball like thesis at the end of this write-up, we can confidently say that US elections ultimately will have little bearing on Bitcoin’s long-term growth trajectory. Both parties will continue to support financial markets, bail out redundant companies and stifle true growth and innovation as a consequence.

As long as central bankers continue the policy of quantitative easing, the case for a store of value that hedges against currency devaluation remains strong.

On the day, it’s reasonable to anticipate a legacy-market reaction to the winning candidate, which could go either way. Typically, markets prefer the status-quo, which means a Trump victory would be perceived as “business as usual”. On the flip side, should Biden win, then market perceptions depend on the inaugural speech in case any bombshells are dropped.

Unless Bitcoin breaks into a new paradigm (i.e. all-time highs), it will probably follow a violent move in legacy markets due to the fact that Bitcoin is still a relatively small asset on the global stage. However, a quick recovery is likely given the context of sustained fiat currency devaluation.

Needless to say, the greatest spectacle a Bitcoiner could see would be an inverse-relationship between stock markets and Bitcoin on the day; this would be the all-in signal of a lifetime.

Ready to invest in Bitcoin? Buy it today in the SwissBorg app.

Disclaimer: The information on this analysis is not targeted at the general public of any particular country. It is not intended to be distributed or used by residents of any country where such distribution or use would contravene any local law or regulatory requirement.

Any analysis, opinion, commentary or research-based material is for information and educational purposes only and is not, in any circumstances, intended to be an offer, recommendation or solicitation to buy or sell. You should always seek independent advice as to your suitability to speculate in any related markets and your ability to assume the associated risks if you are at all unsure. No representation or warranty is made, express or implied, that the materials are complete or accurate. We are not under any obligation to update any such material.

As such, we (and/or our associated companies) will not be responsible or liable for any loss or damage incurred by you or any third party arising out of, or in connection with, any use of the information on our Analysis (other than with regards to any duty or liability that we are unable to limit or exclude by law or under the applicable regulatory system) and any such liability is hereby expressly disclaimed.