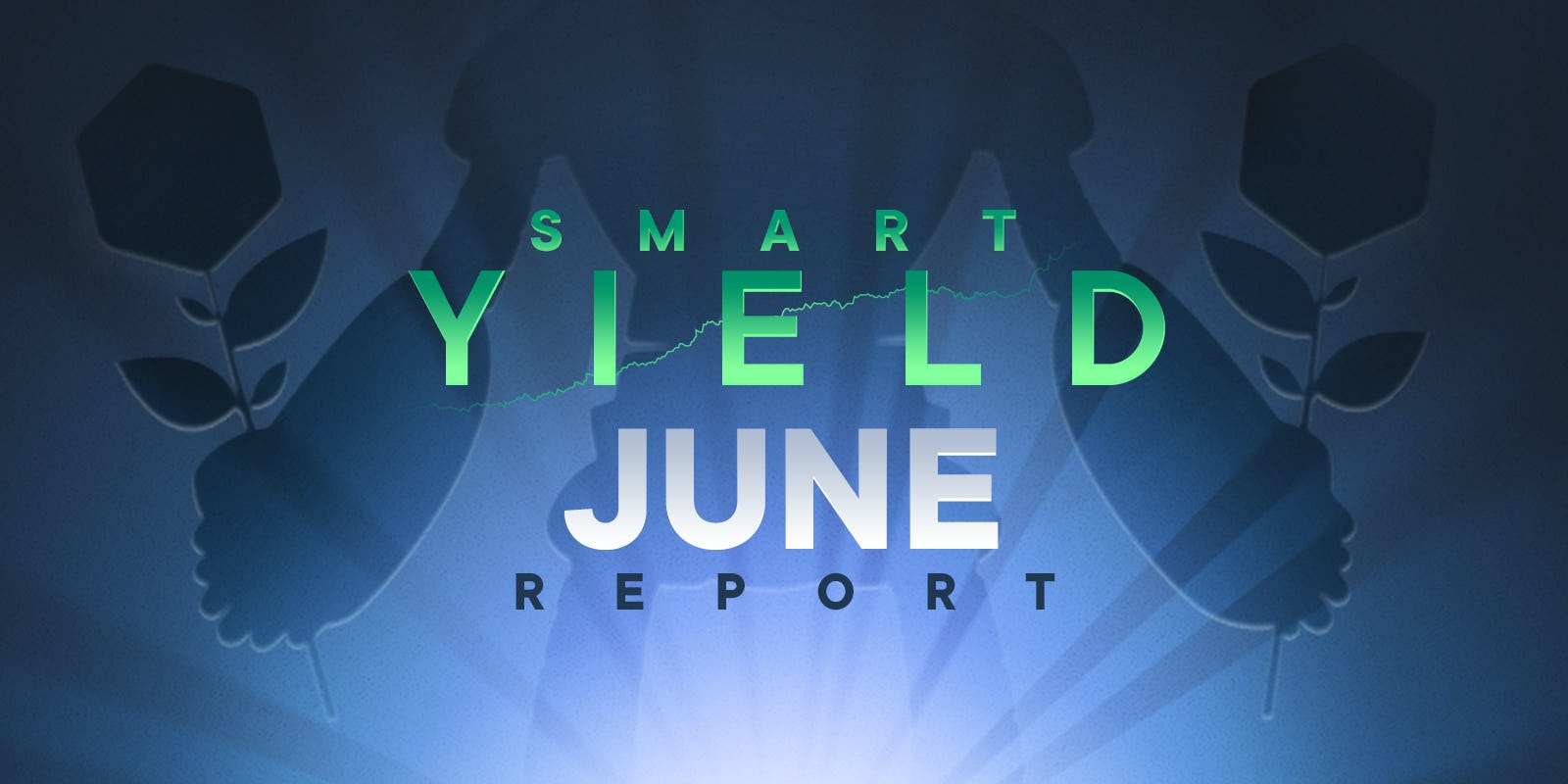 The content of this report will be subject to change based on your feedback and the evolution of the information we receive.

The Smart Yield wallet simplifies and optimises earning a yield on your crypto, every single day. The goal is to find the best return for the lowest risk, as well as offering some of the best yielding conditions available in the market. Learn more about how Smart Yield works.

Last month we reported on the slowing growth of DeFi, using total value locked (TVL) as a metric to measure market interest. In dollar-denominated terms, TVL has remained stationary. Though there are some minor fluctuations between chains, we see no real trend suggesting a gain or loss in interest in DeFi protocols throughout June. For Ethereum in particular, TVL in ETH-denominated terms has seen a steady increase, from approximately 32 million to 38 million ETH locked. At the same time, secondary chains (BSC and Polygon) bled some TVL, suggesting a more risk-averse stance in the market, as Ethereum is still considered the primary and ‘safer’ chain.

Fluctuations in the market have not stopped development in the space. Kyber network announced its move to Polygon halfway through the month, with Balancer also making the jump very recently. Both are considered household names within DeFi, and a handful of other smaller projects have also followed suit. The continued adoption of Polygon shows that it is here to stay for the immediate future, though it is unclear whether the moves are following or creating demand.

We continue to stress the risks of DeFi. The frequency of exploits appeared to slow in the first half of the month, but then quickly resumed pace in the second half. One of the exploits was carried out on Iron.finance on Polygon, with a novel attack vector taking advantage of a flaw in the arbitrage logic of the platform as well as panic from investors involved with the platform. This was a pool the strategy optimiser had invested in, though the impact to our yield program was minimal. More details can be found in the Safety Net section towards the end of this report.

The number of assets with Smart Yield wallets keeps increasing. This month, both BNB and USDT were added, while XRP was added on 1st July. Both of the new wallets have been successful, with an increasing inflow over this first week for USDT cumulating to half a million USDT.

The number of users across all Smart Yield wallets continues to increase, but at a slower pace than when we first launched USDC, ETH and BTC. The reason for this is likely lower interest in the crypto markets in general (particularly from retail investors) since assets fell from their April and May all-time highs. Volatility is also continuing to rise, due to a combination of unfavorable seasonality (summer) and a low quantity of assets on exchanges.

Since 23rd June, we have observed that the total amount in the USDC Smart Yield wallet is in a downtrend, though this coincides with the launch of the USDT Smart Yield wallet (24th June), and has been linked to transfers to USDT.

New yield wallets also continue to attract new capital from outside the app, with 35,966 new BNB having been added to the Smart Yield, and 1.5 million new USDT being added.

In the past month, we’ve also seen average yields drop due to the current market environment. Alt coins are underperforming Bitcoin, especially defi platform tokens, which is weighing on Smart Yield returns. Yields have also been decreasing globally due to normalisation across DeFi platforms across major blockchains: Ethereum, Binance and Matic.

There are also an increasing number of liquidity pools where the risk/return ratio does not meet the requirements of our strategy optimiser, which resulted in less diversification in the investments made by the Smart Yield program at the end of June in order to reduce the risk for our users. 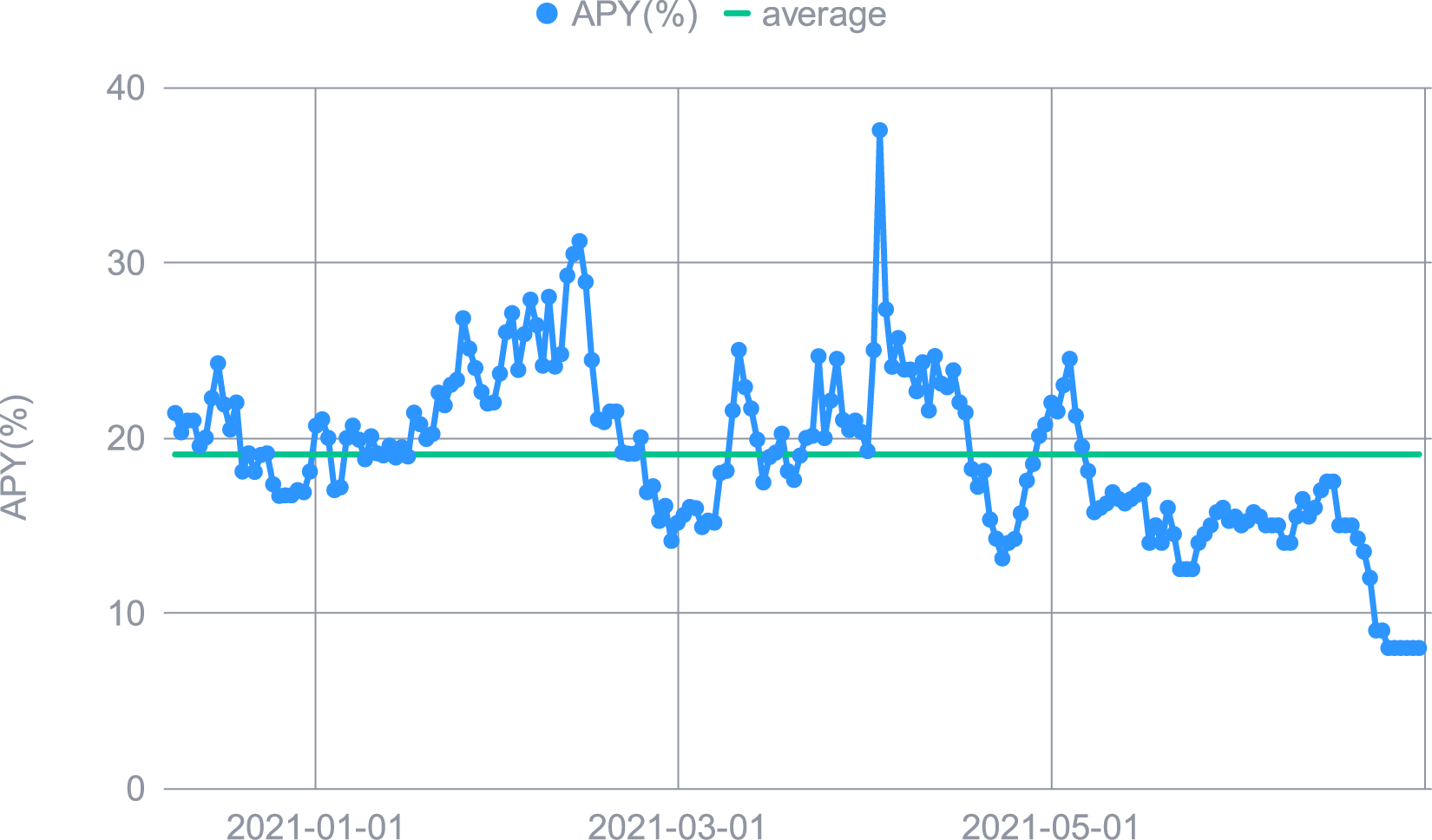 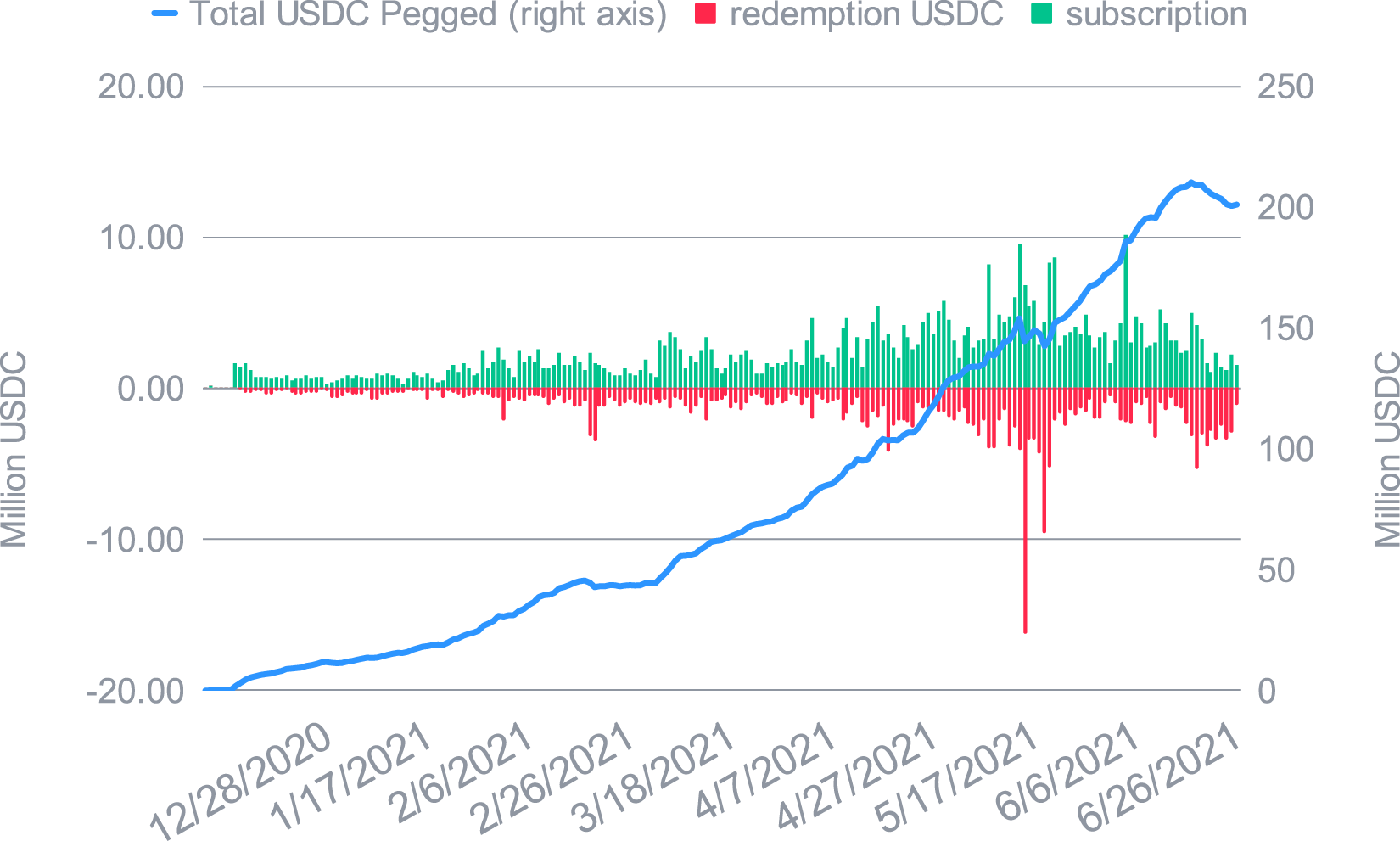 USDC growth in the Smart Yield wallet and daily subscription/redemption 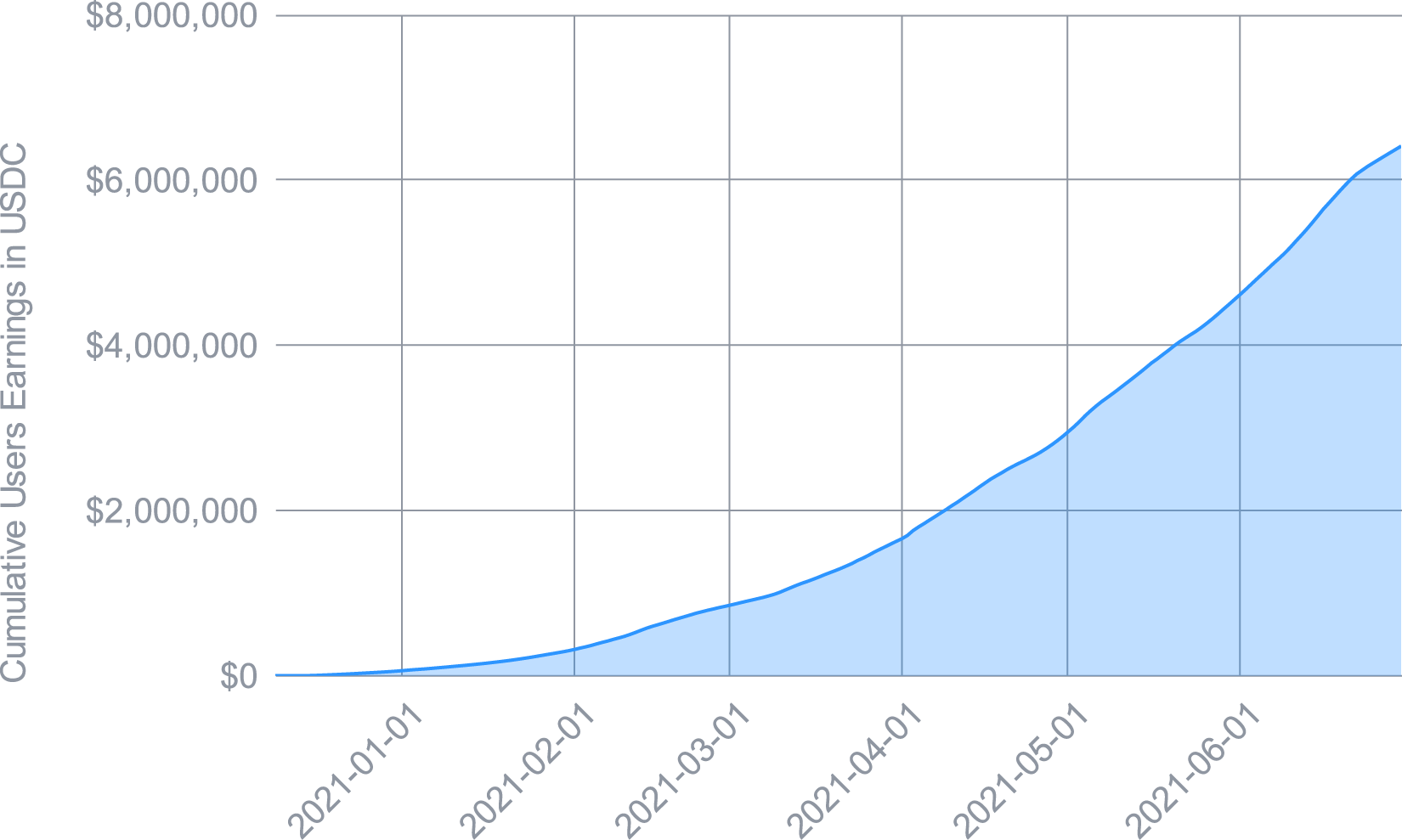 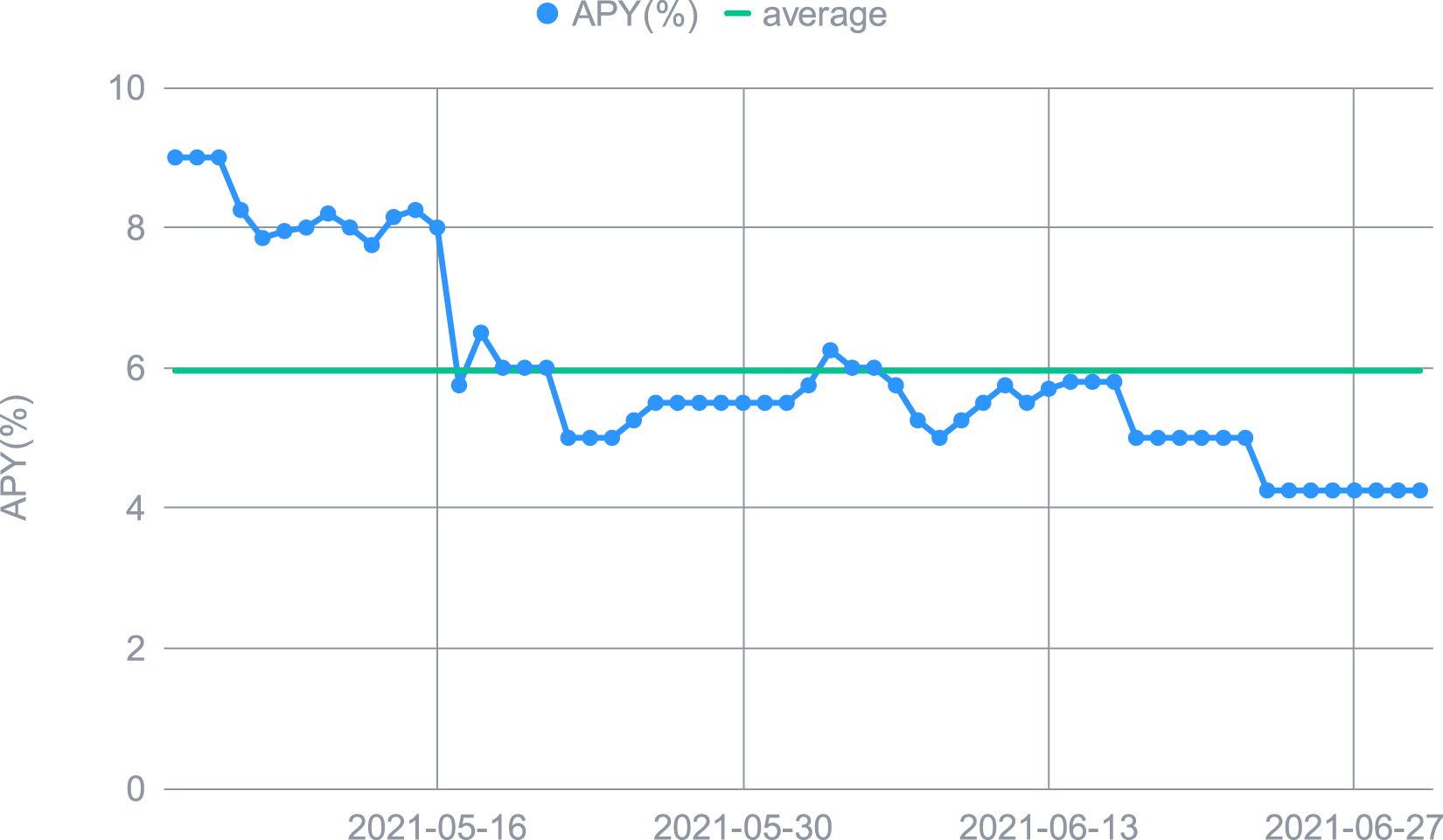 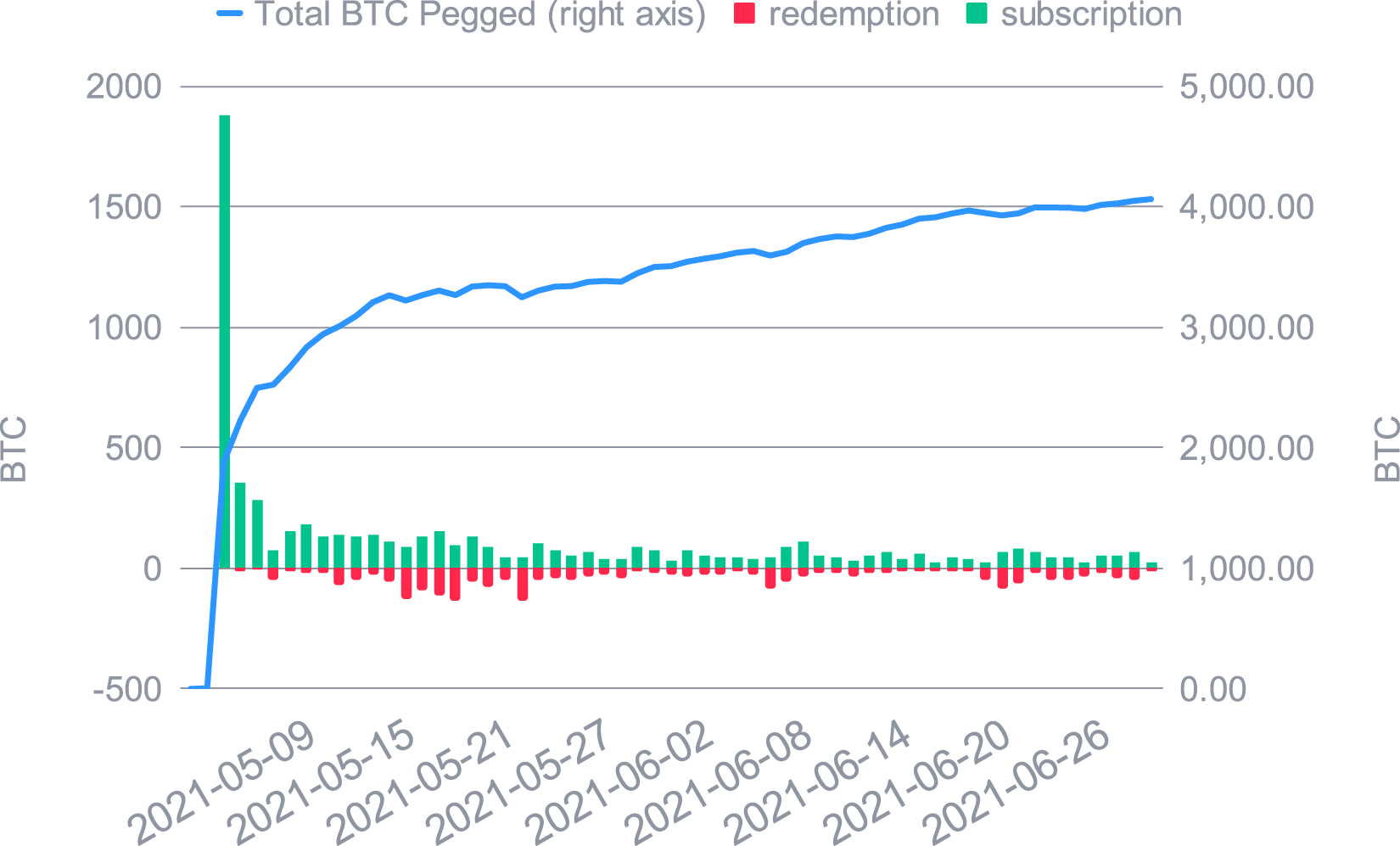 BTC growth in the Smart Yield wallet and daily subscriptions/redemptions 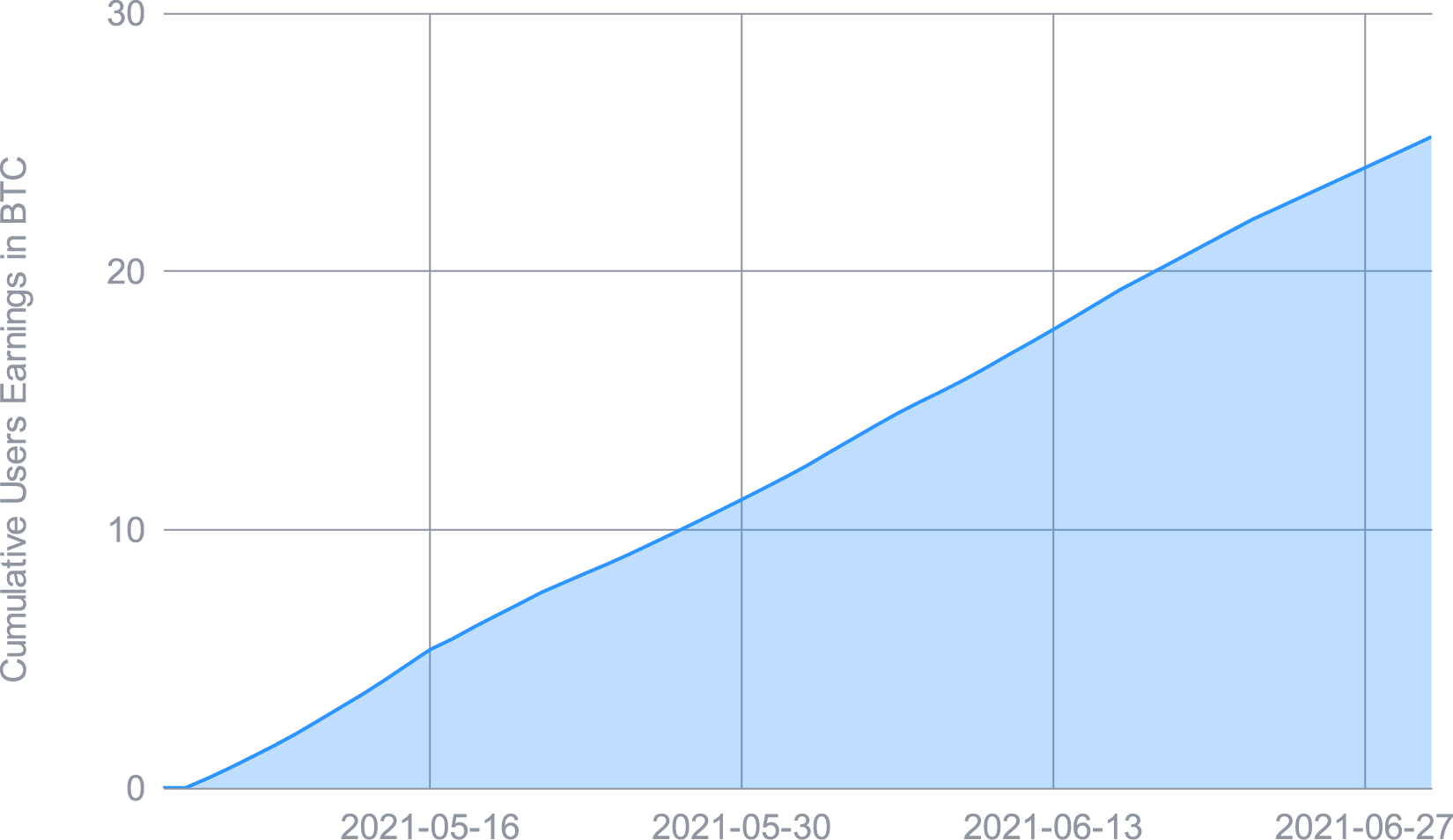 Note that in last month’s report, there was an error in the number of ETH earned in the Smart Yield wallet. This has now been corrected. 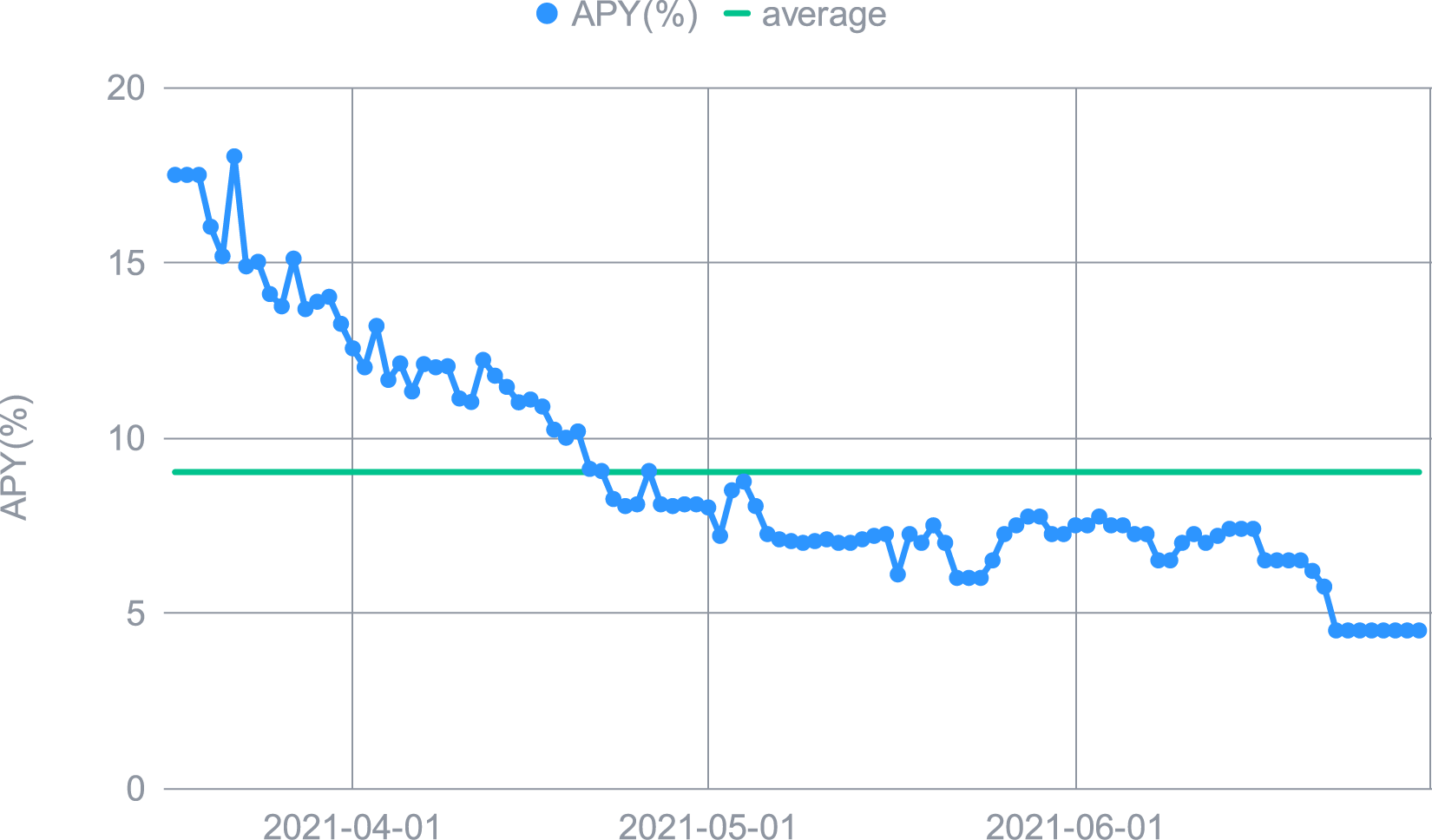 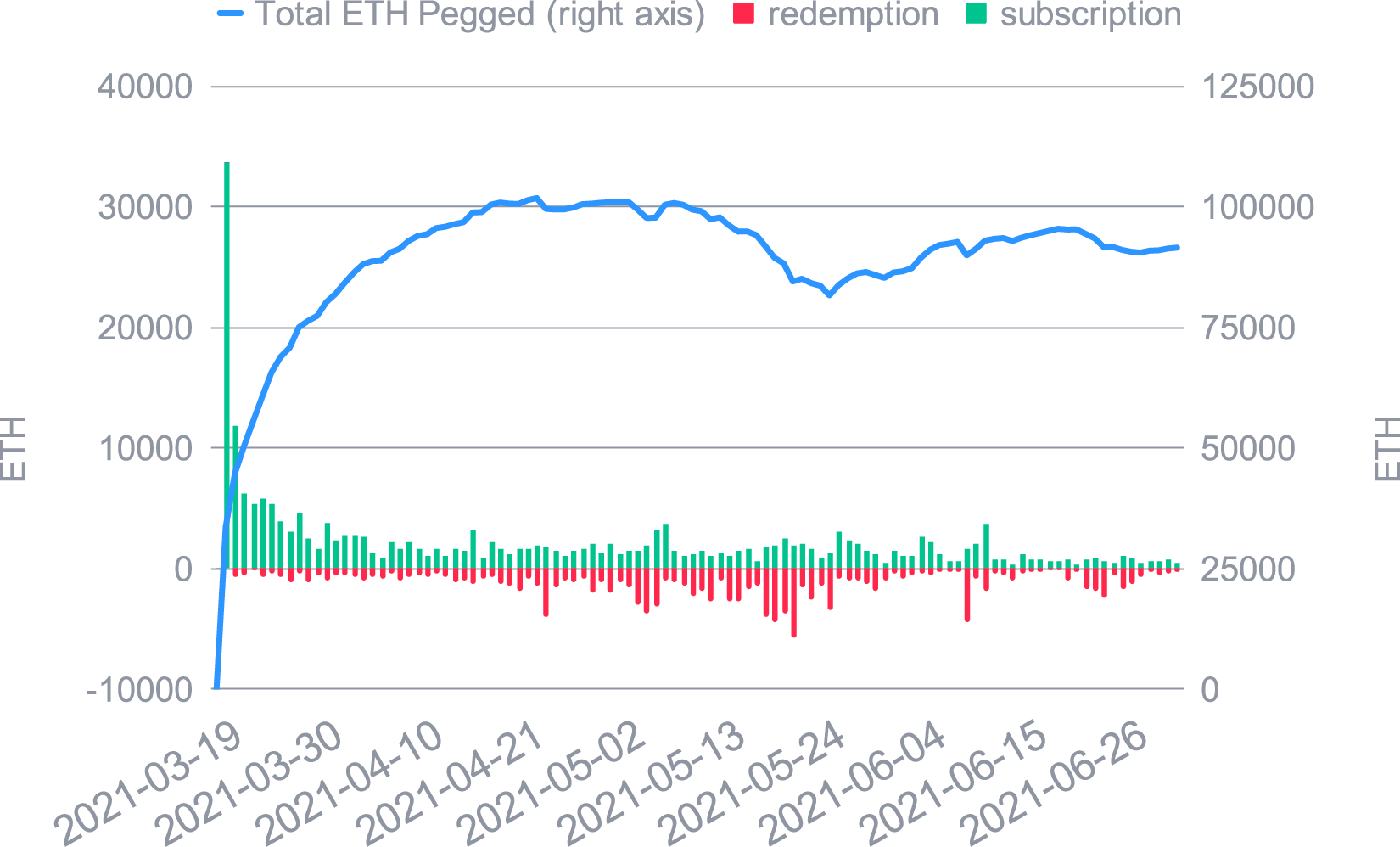 ETH growth in the Smart Yield wallet and daily subscriptions/redemptions 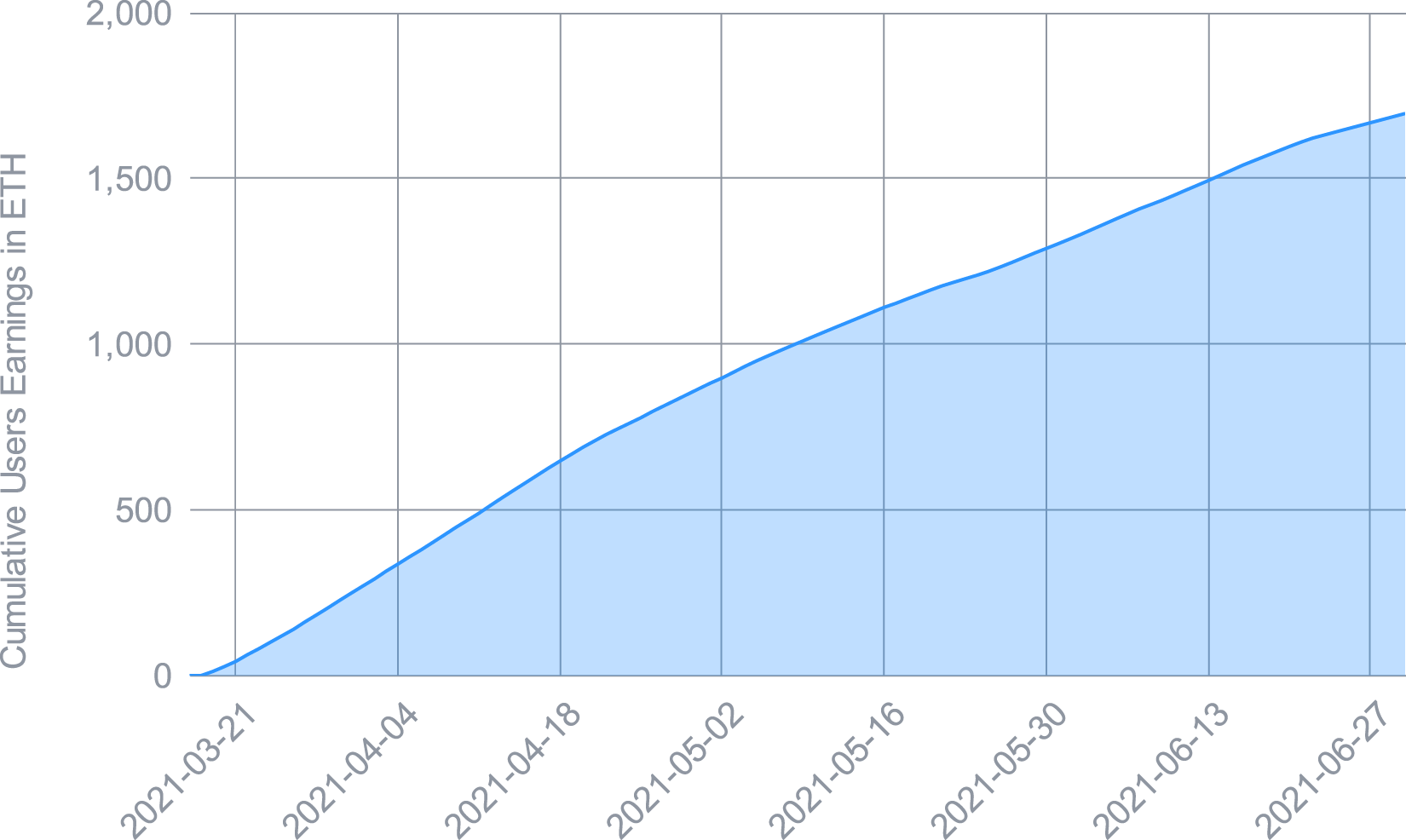 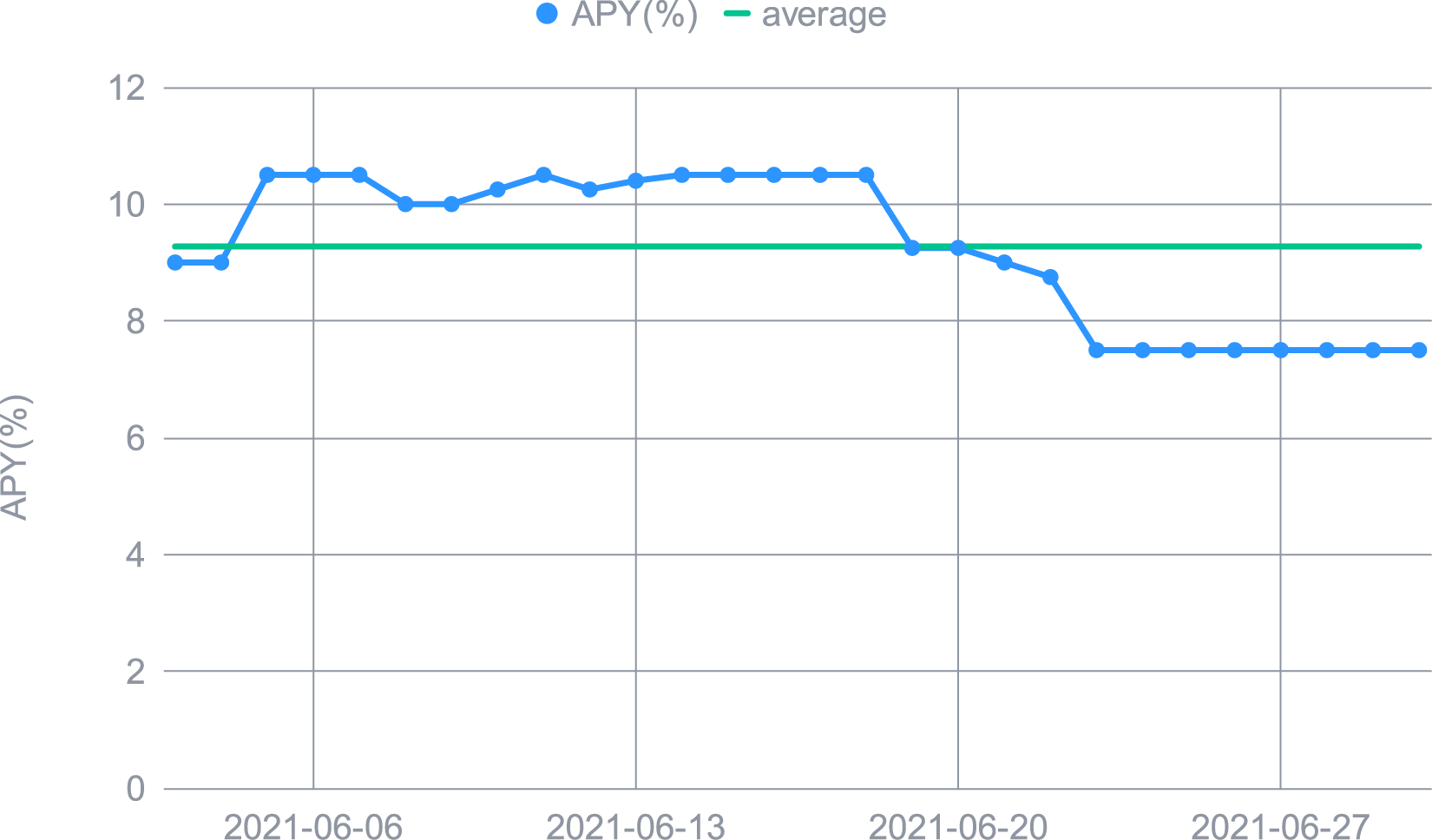 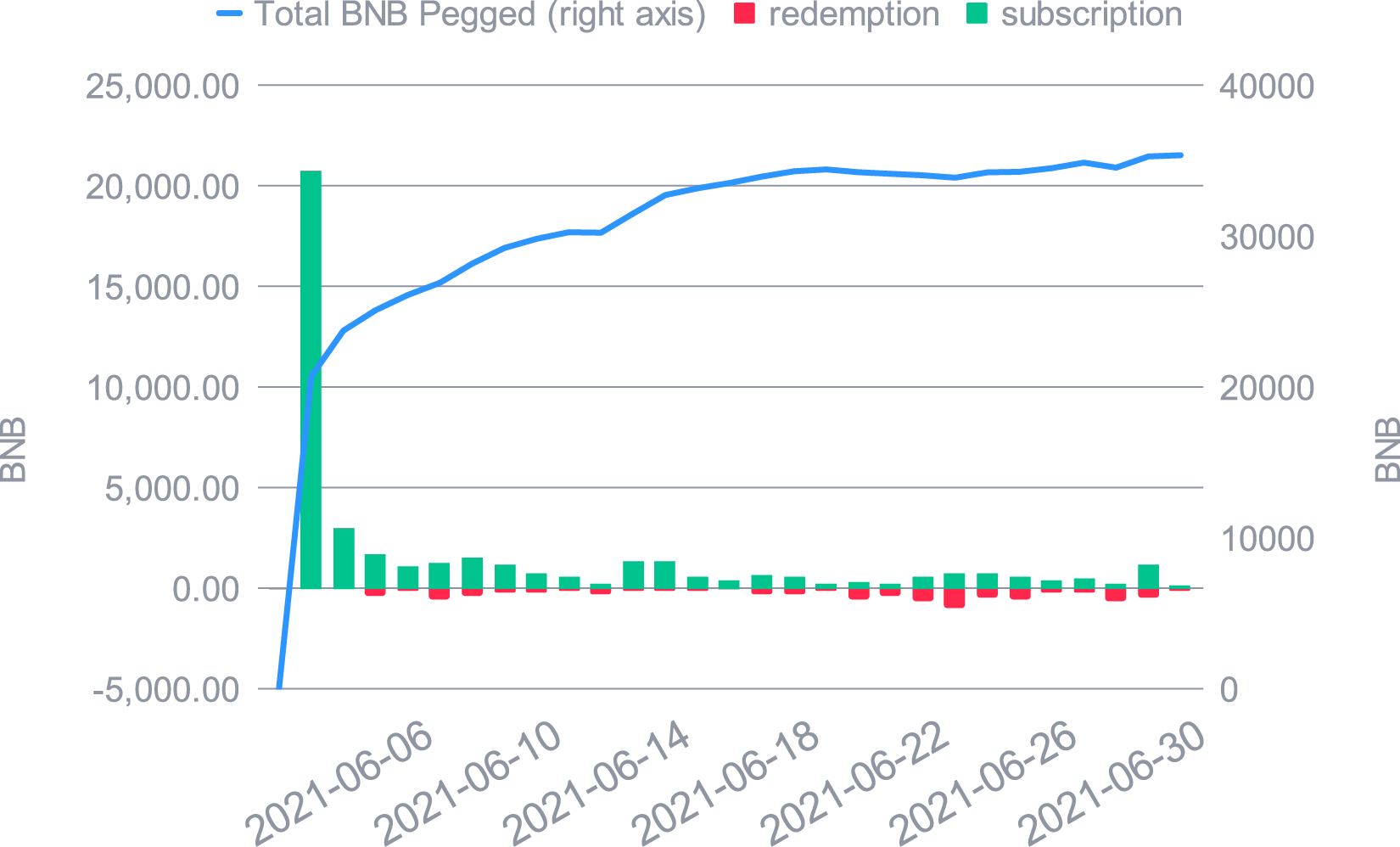 BNB growth in the Smart Yield wallet and daily subscriptions/redemptions 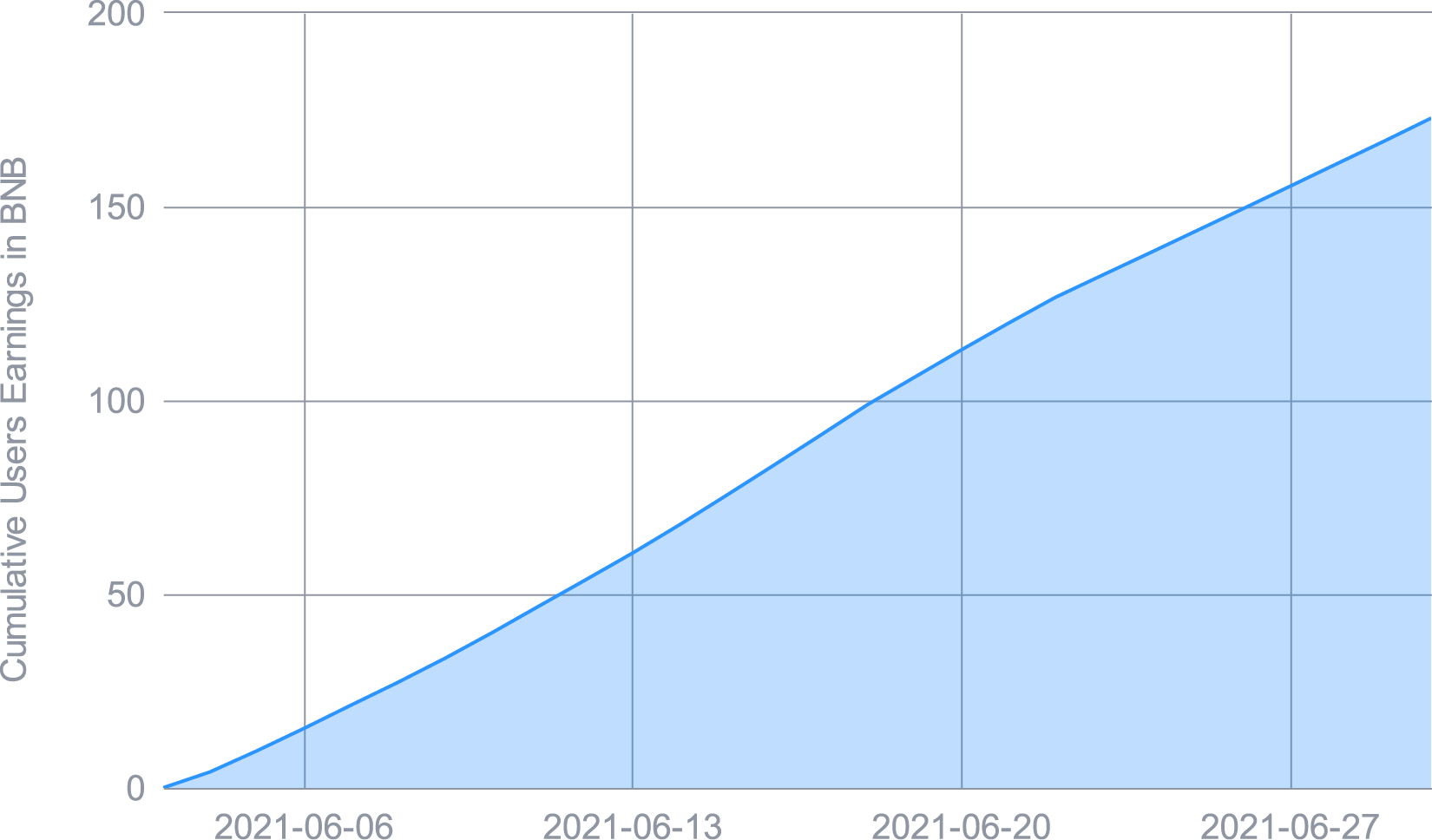 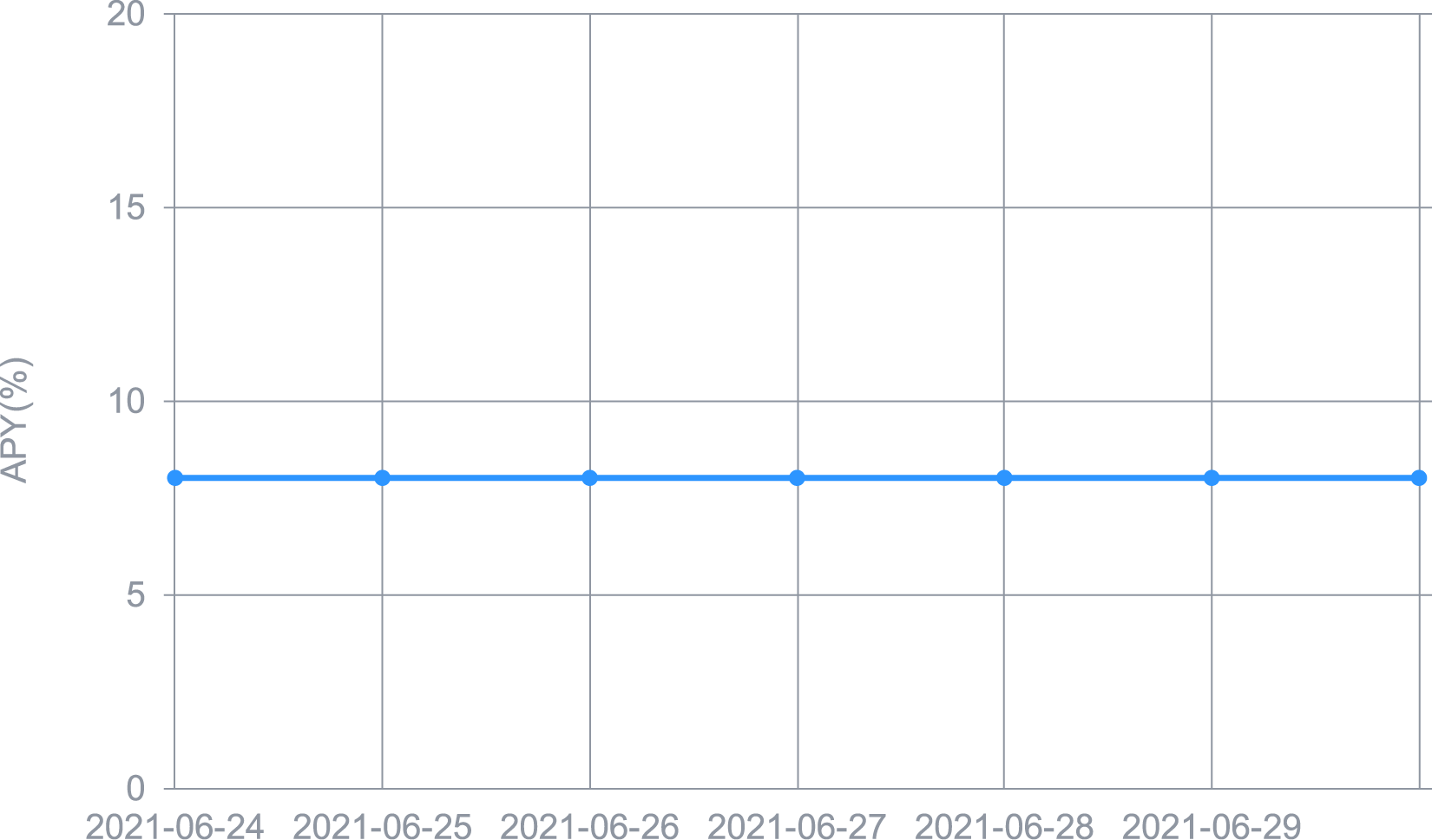 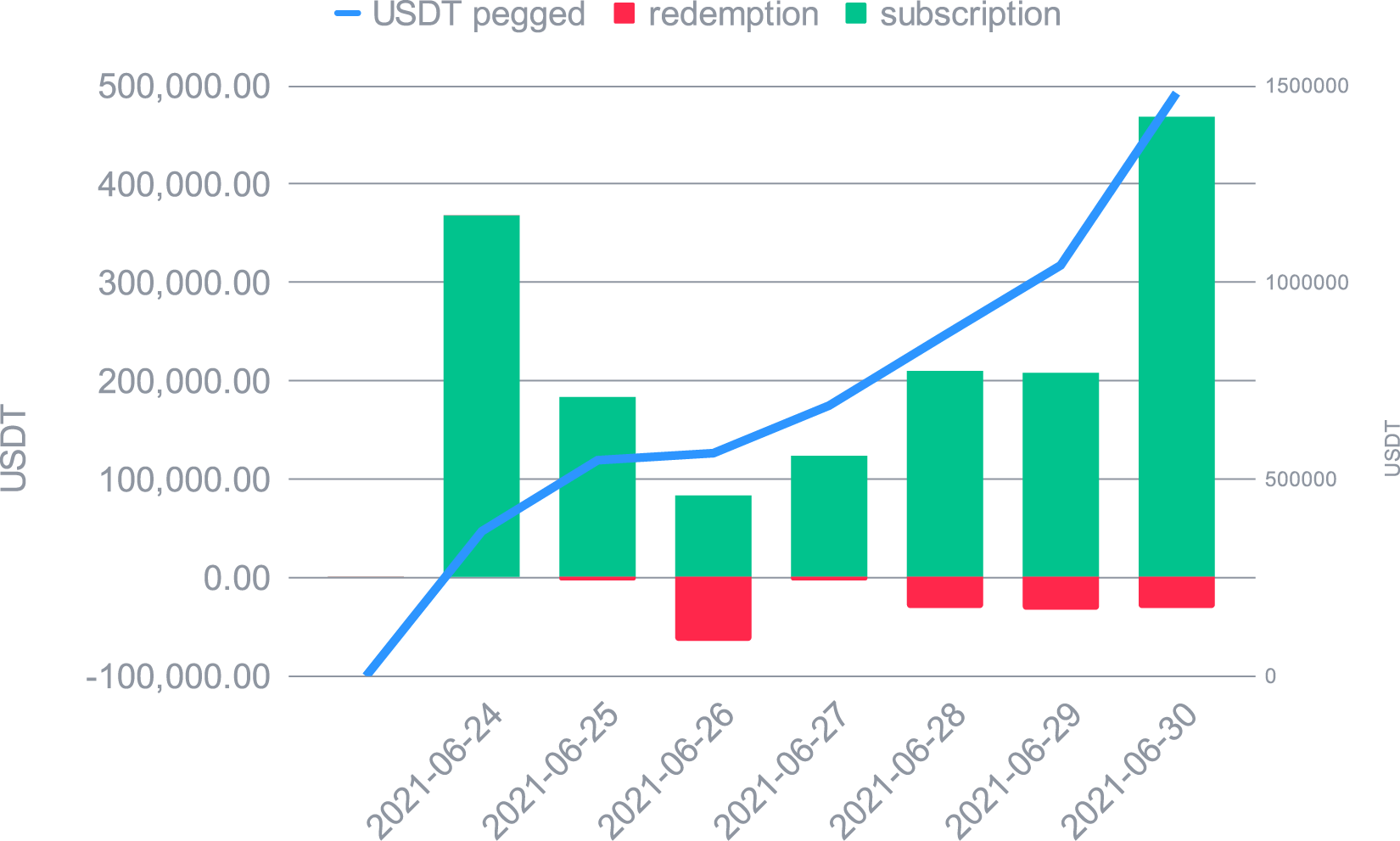 USDT growth in the Smart Yield wallet and daily subscriptions/redemptions 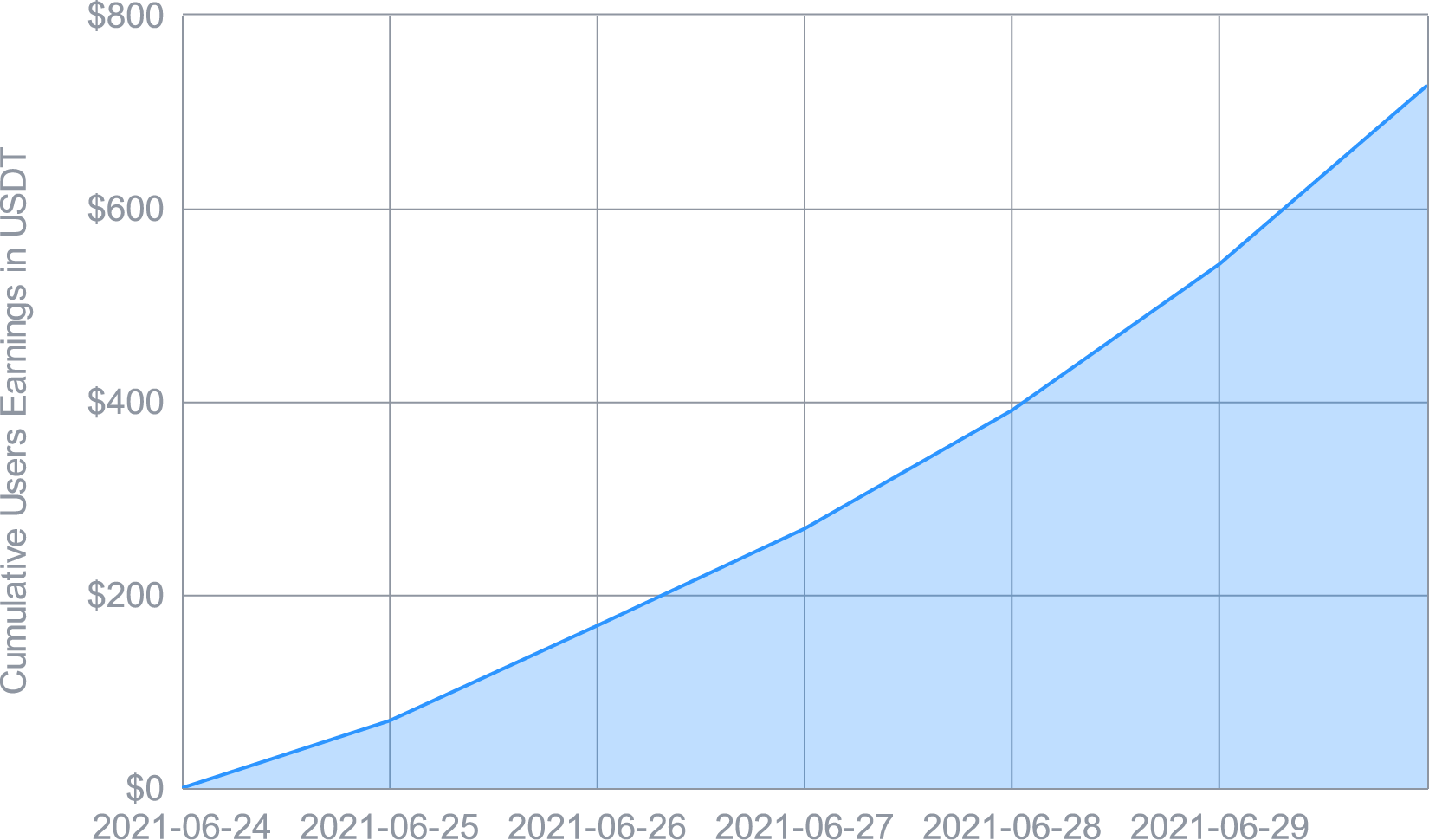 In order to obtain the best possible return for the optimal level of risk, the Smart Yield strategy involves diversifying into numerous DeFi and CeFi applications once they have been audited (smart contract and due diligence) in order to limit the risks.

30 different applications were used in June for maximum diversification in 3 different blockchains.

At the end of June, the Smart Yield program allocation became more concentrated than at the beginning of the month, due to most liquidity providing strategies not being profitable enough to compensate for the volatility and the risk of the platform.

The goal of the strategy optimiser is to find the best risk/return ratio for earning a yield (as the Smart Yield wallets are designed to protect capital), with a focus on normalised earnings over the long term. Even though the yields in the program are adjusted daily, the Smart Yield wallets have been built with long-term investments in mind, meaning that the yields should be judged based on their averages over 6-12 months, rather than on a daily basis.

The diversification across multiple blockchains and the extremely volatile market is responsible for the increase in transactions in the Smart Yield program, demonstrating the complexity and power of the strategy optimiser. With the increase of offers on the DeFi ecosystem and additions of new Smart Yield wallets, this diversification is set to continue.

It is noted here that the increase in the number of transactions is a healthy sign for risk management and optimisation, and also demonstrates the fierce competition in the DeFi ecosystem, which is not manageable without a complex system such as the strategy optimiser. 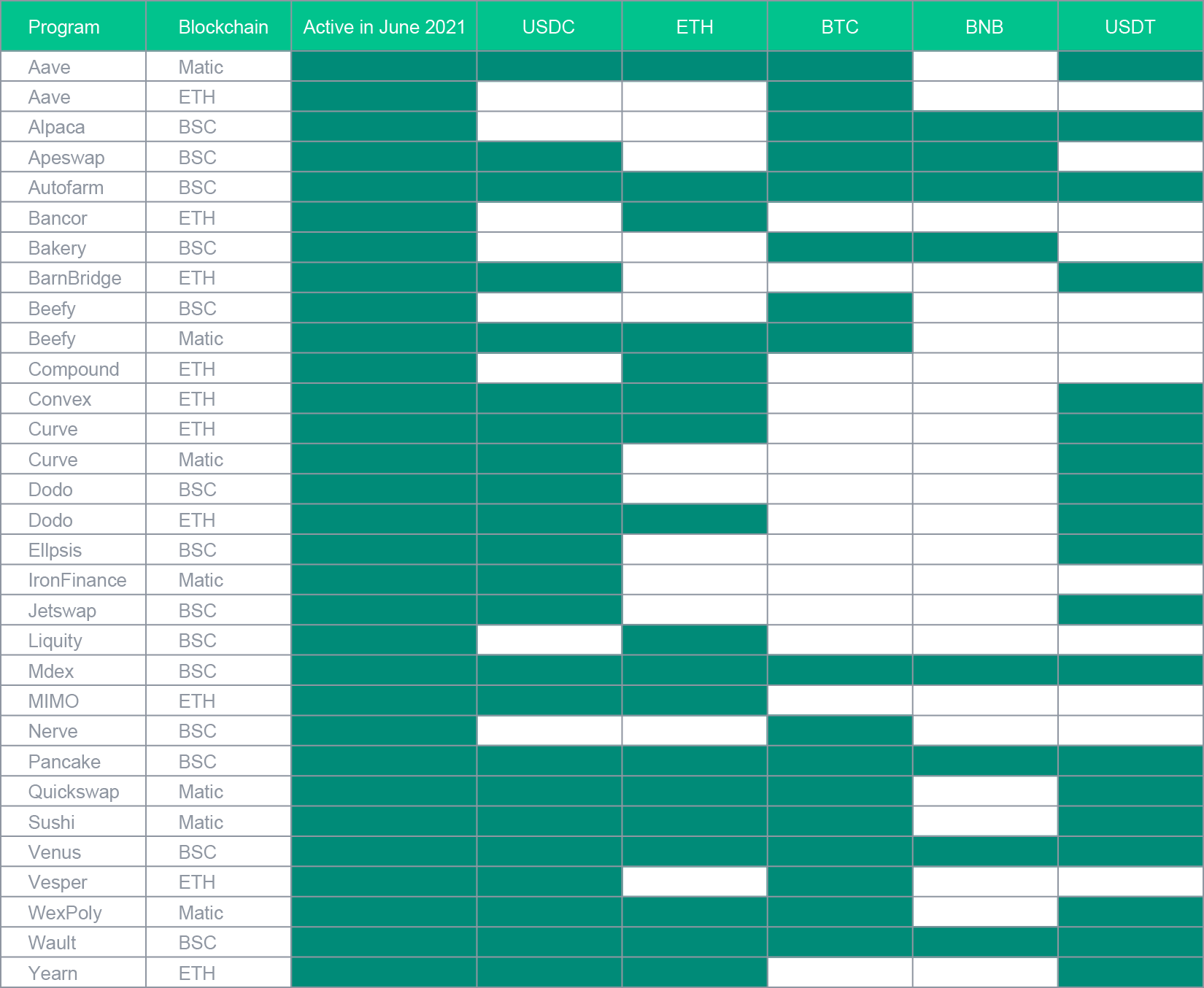 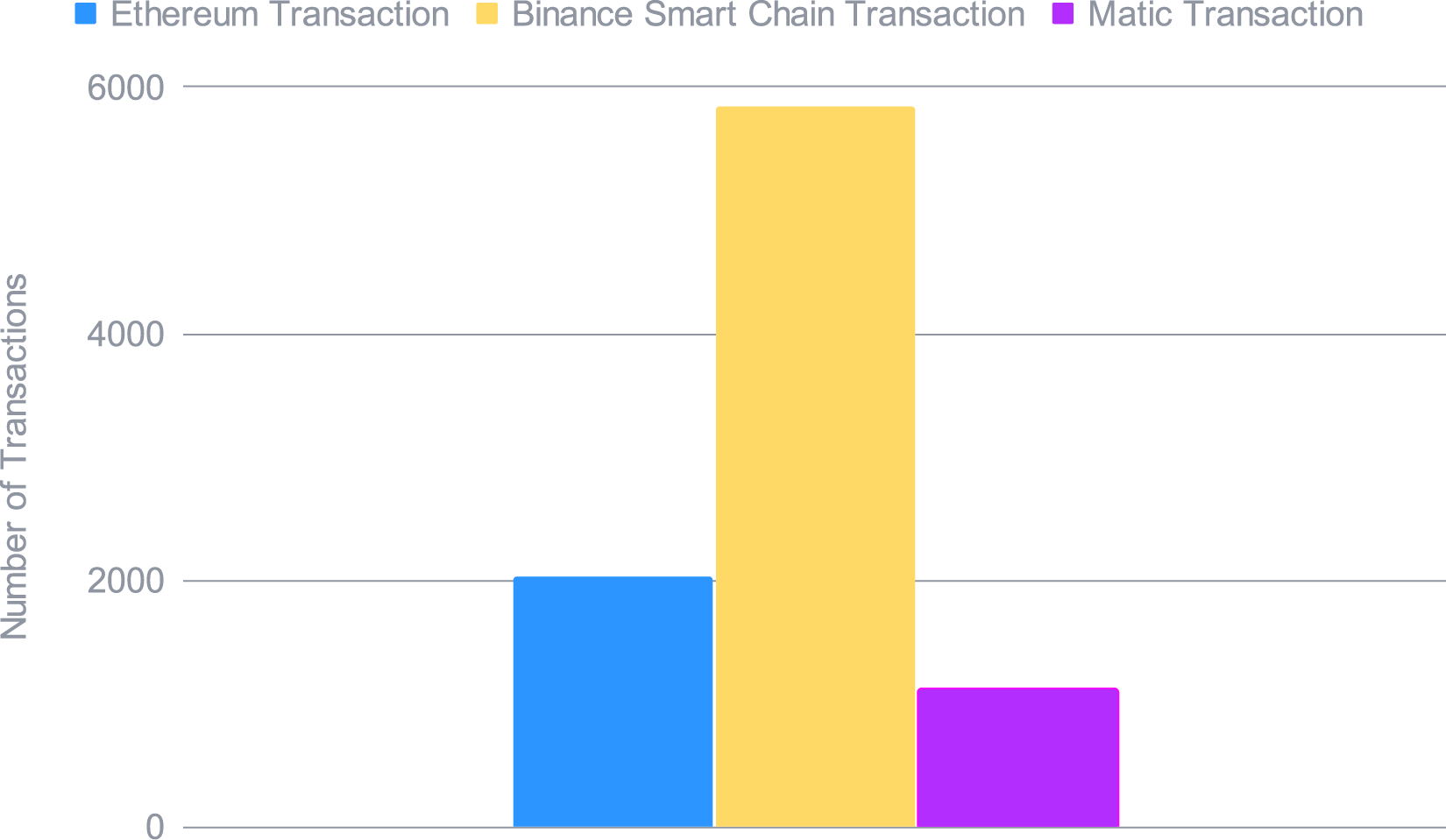 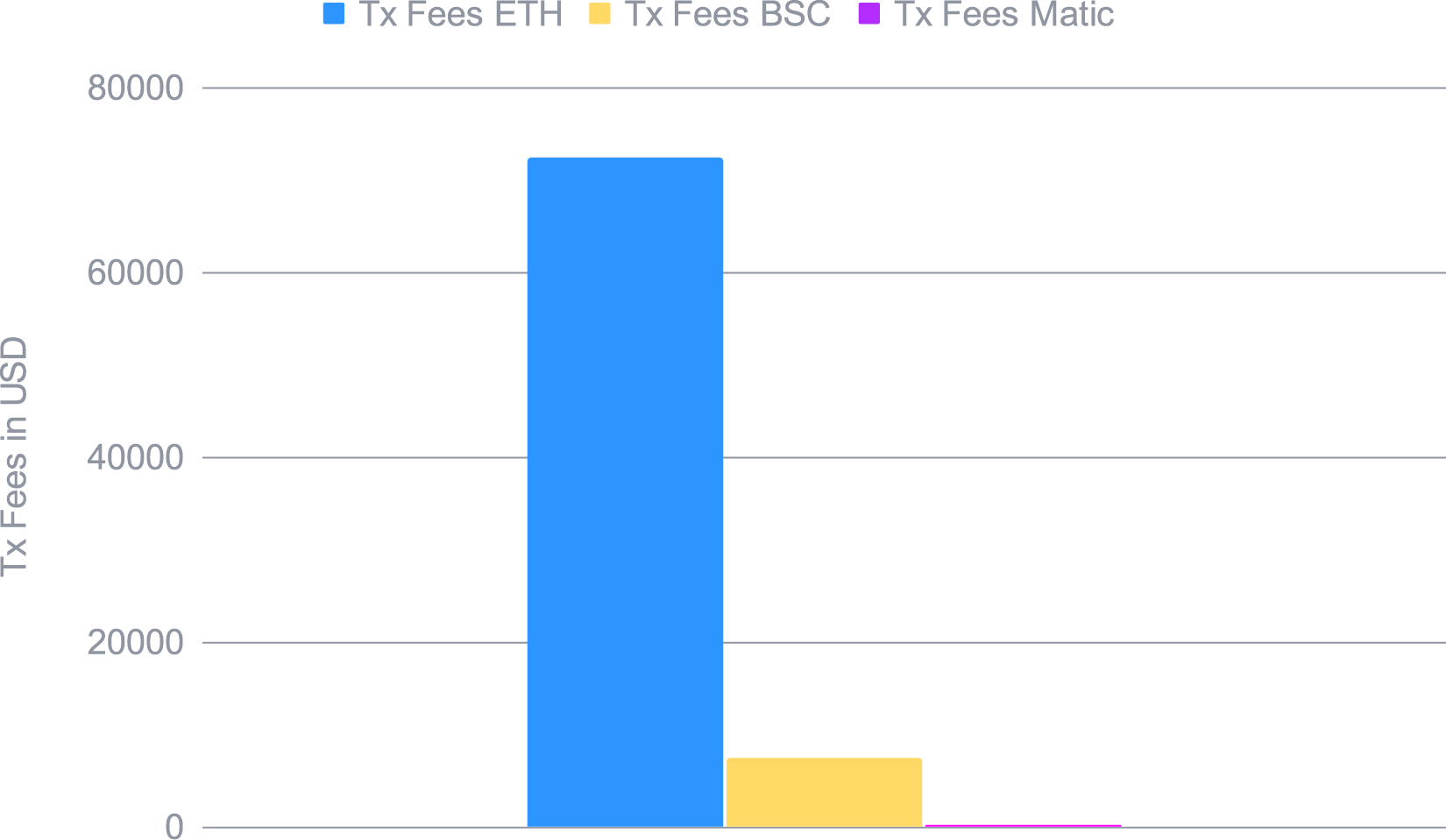 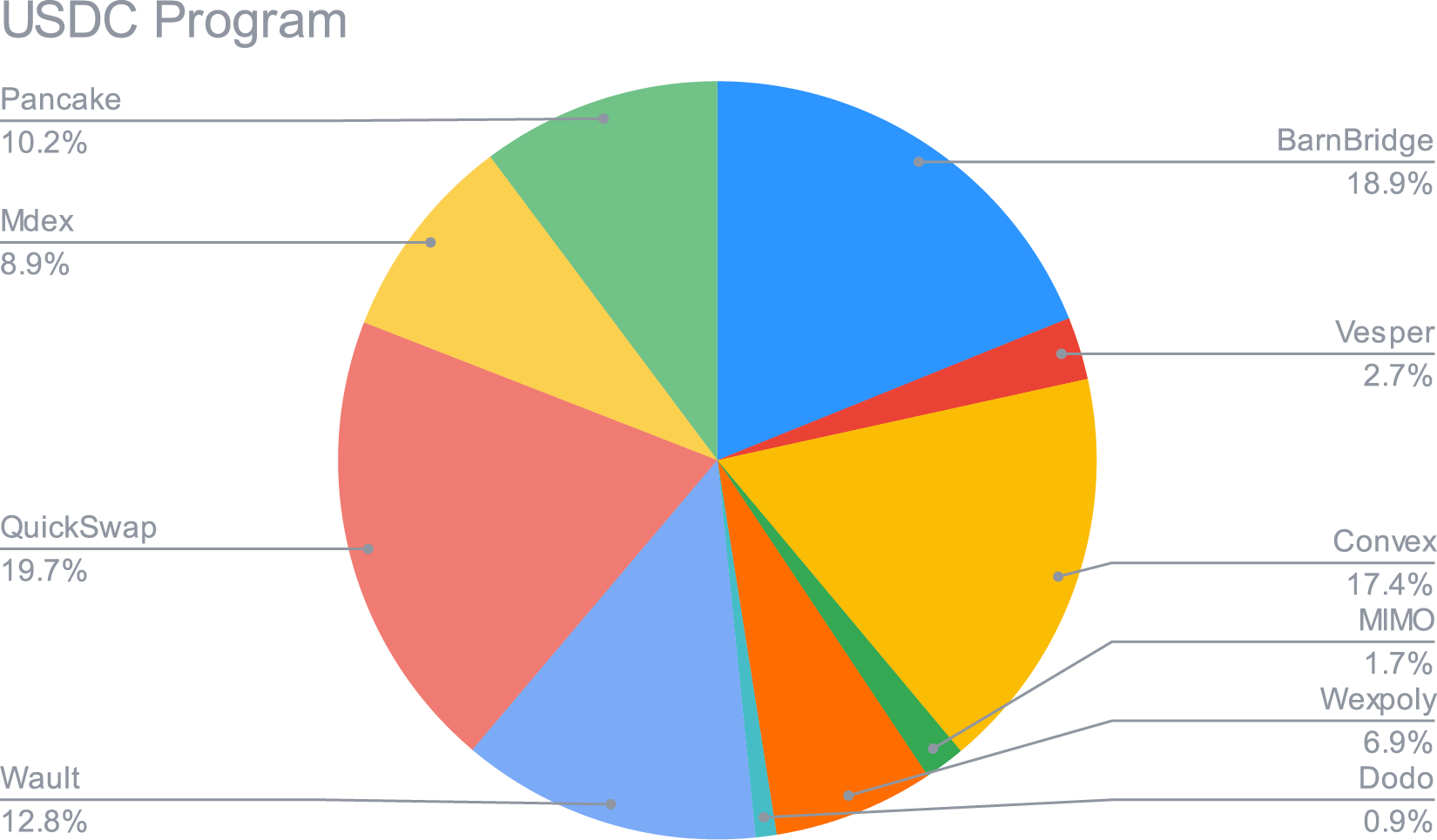 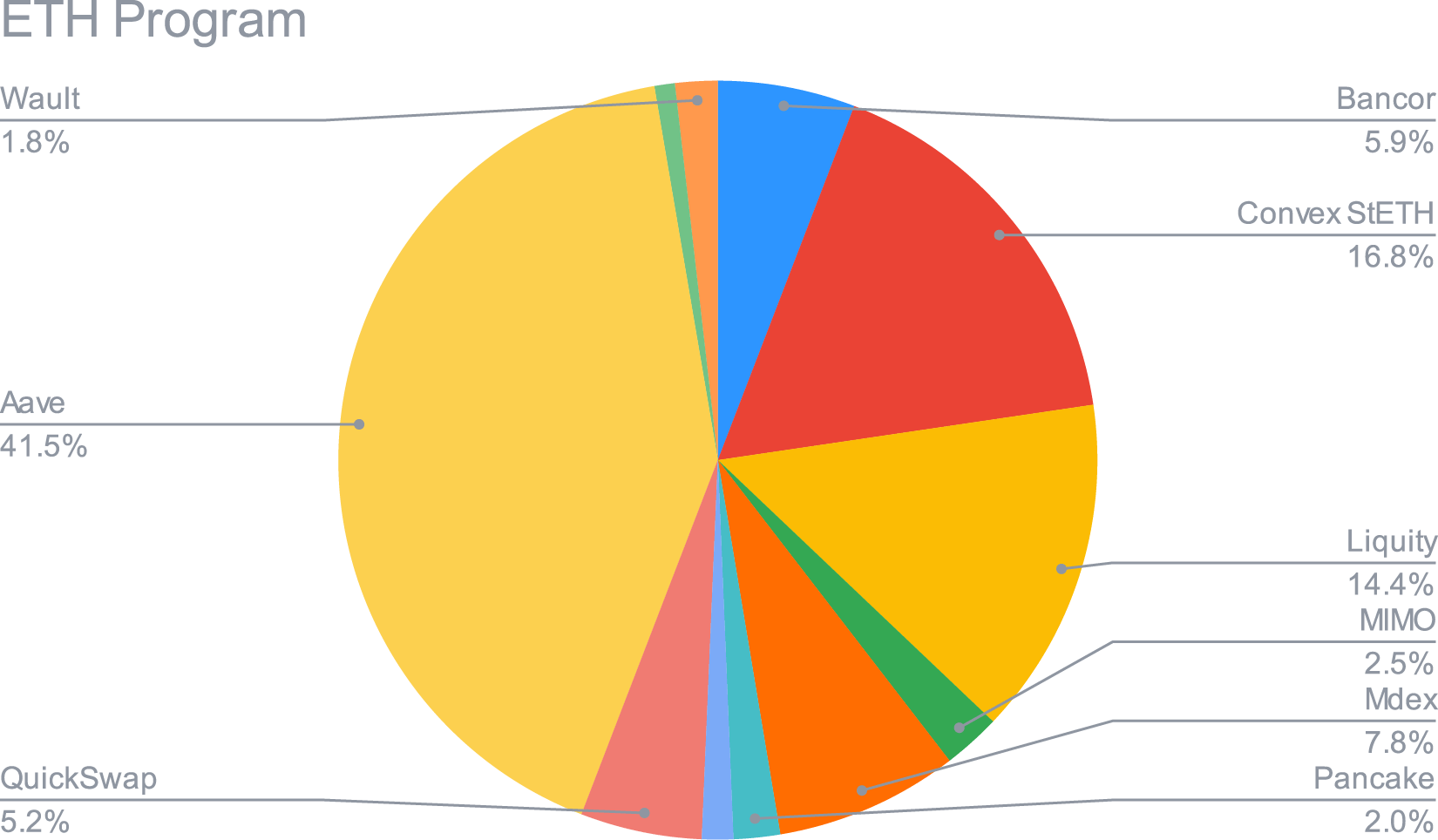 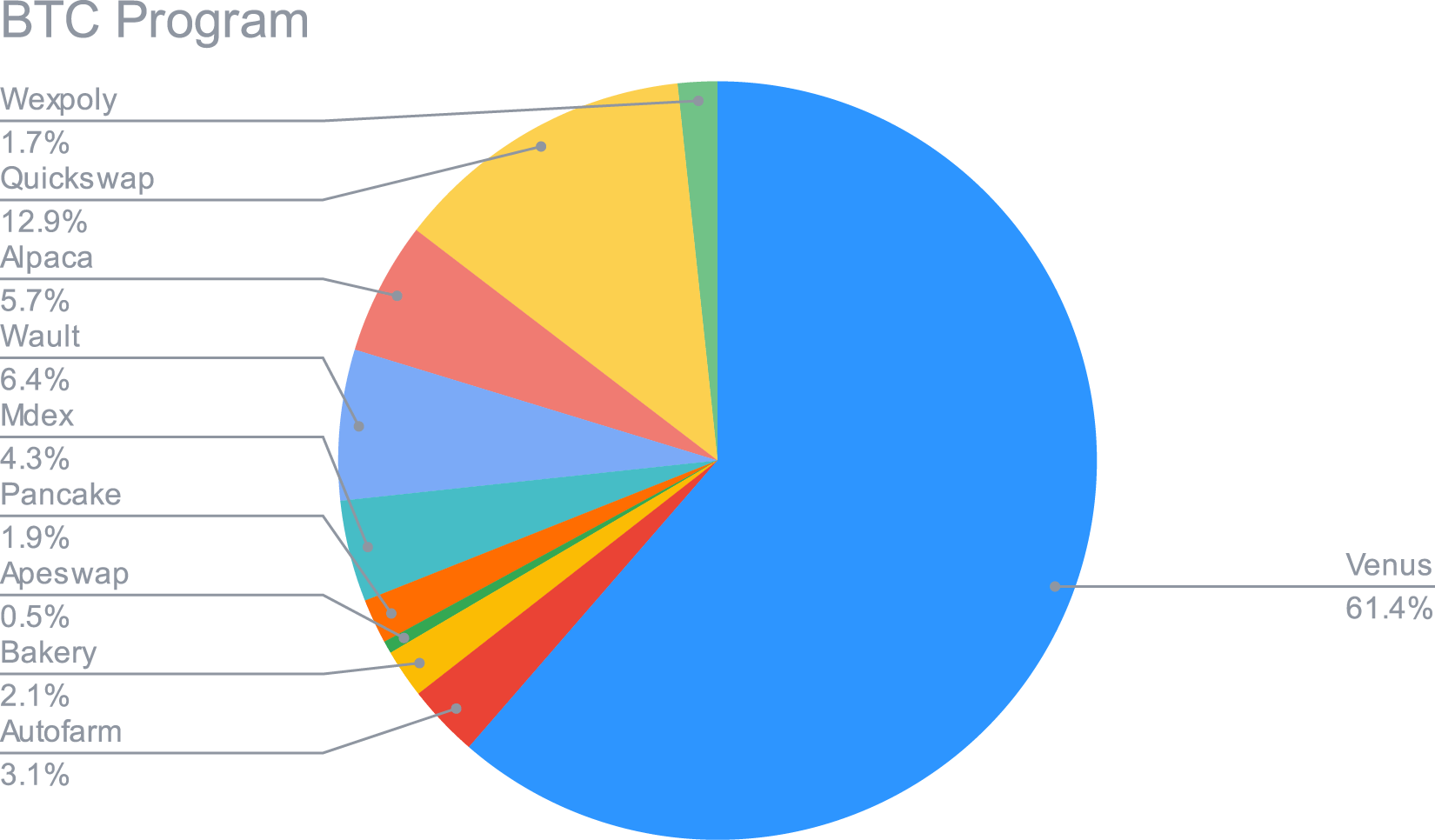 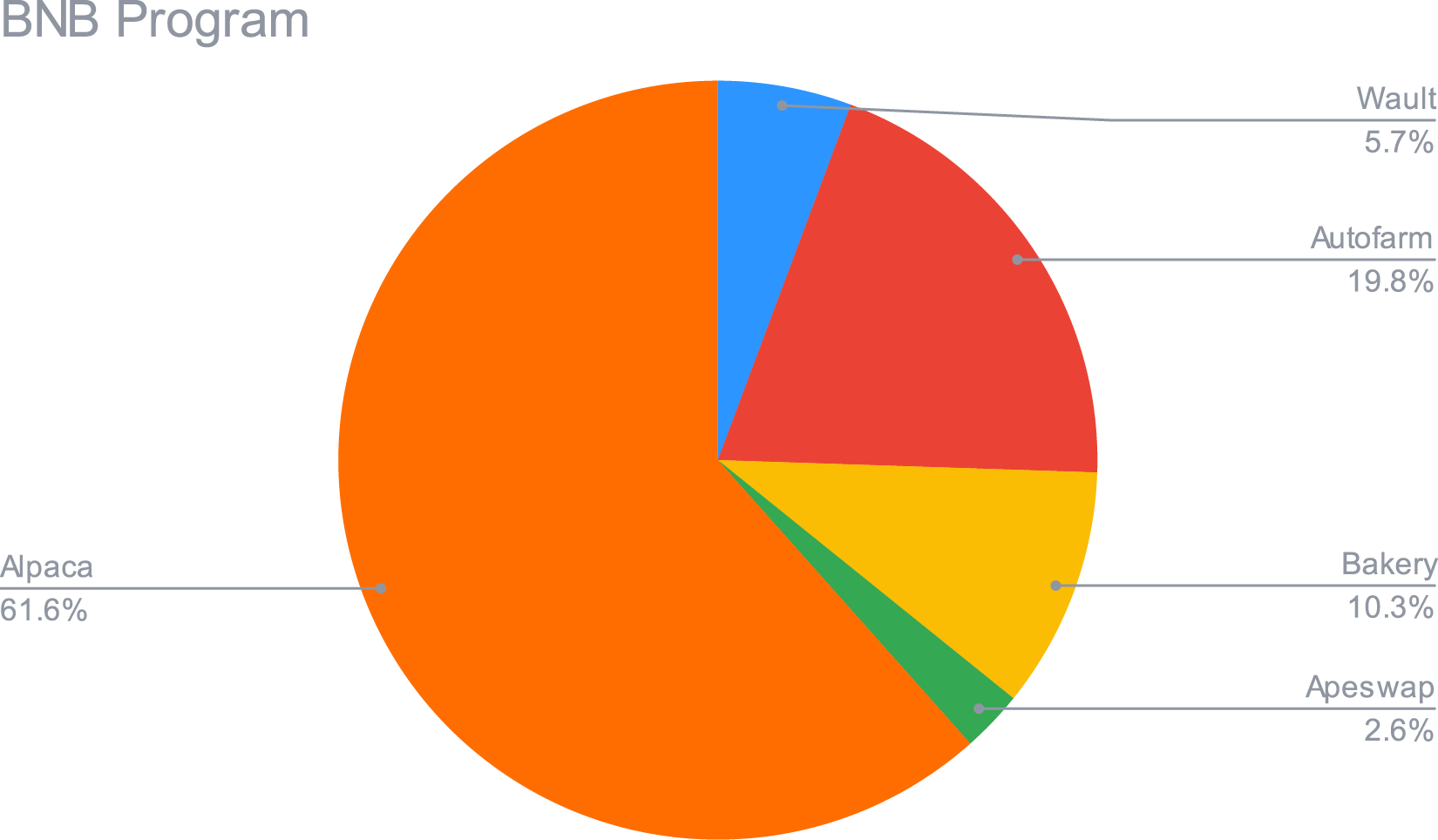 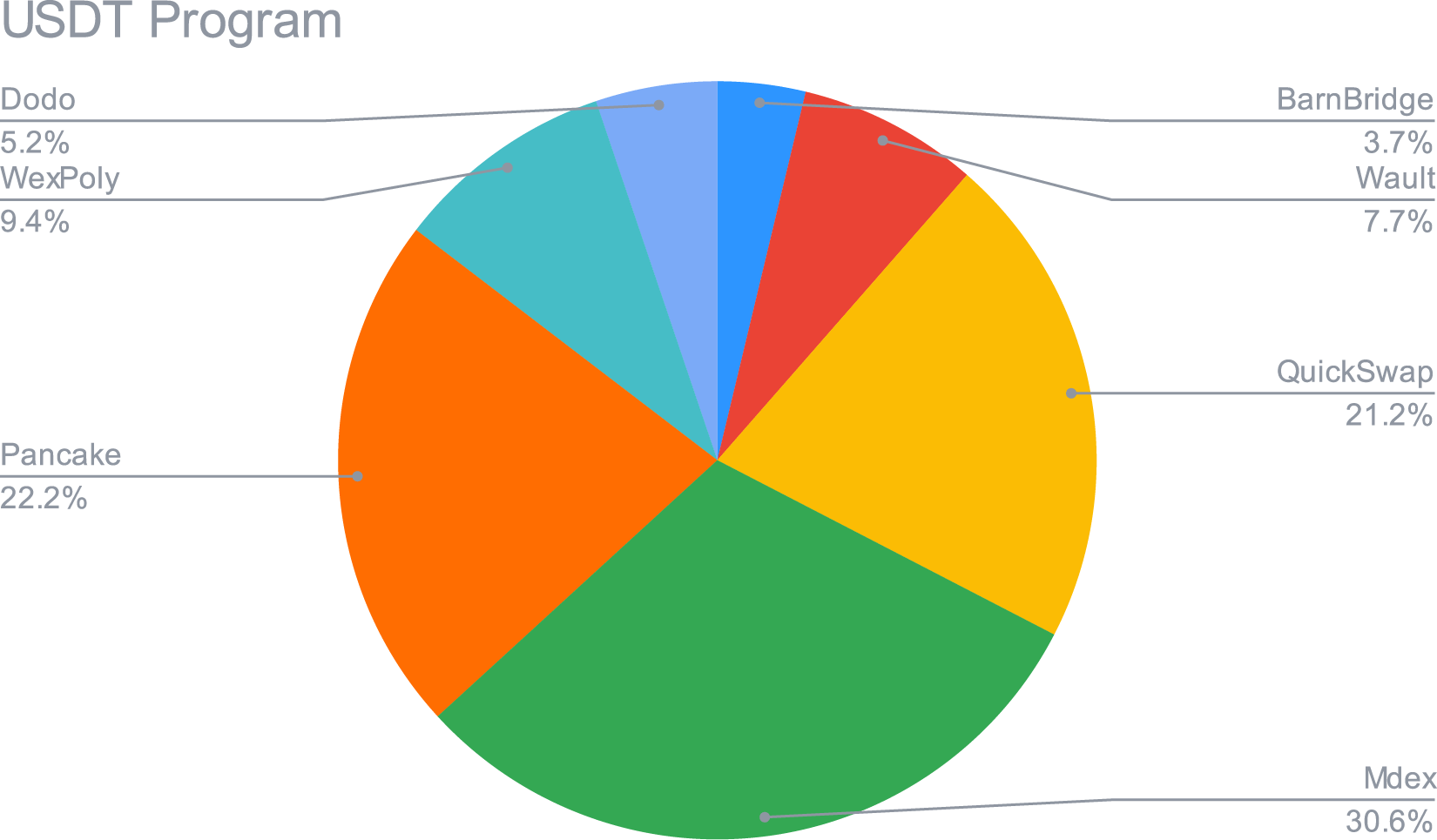 SwissBorg has also established a USD1 million Safety Net Program in CHSB (8,333,333 CHSB) to protect against Smart Contract risk, and we put the equivalent of 25% of max yield earnings into that program to ensure it grows alongside our community’s investments. 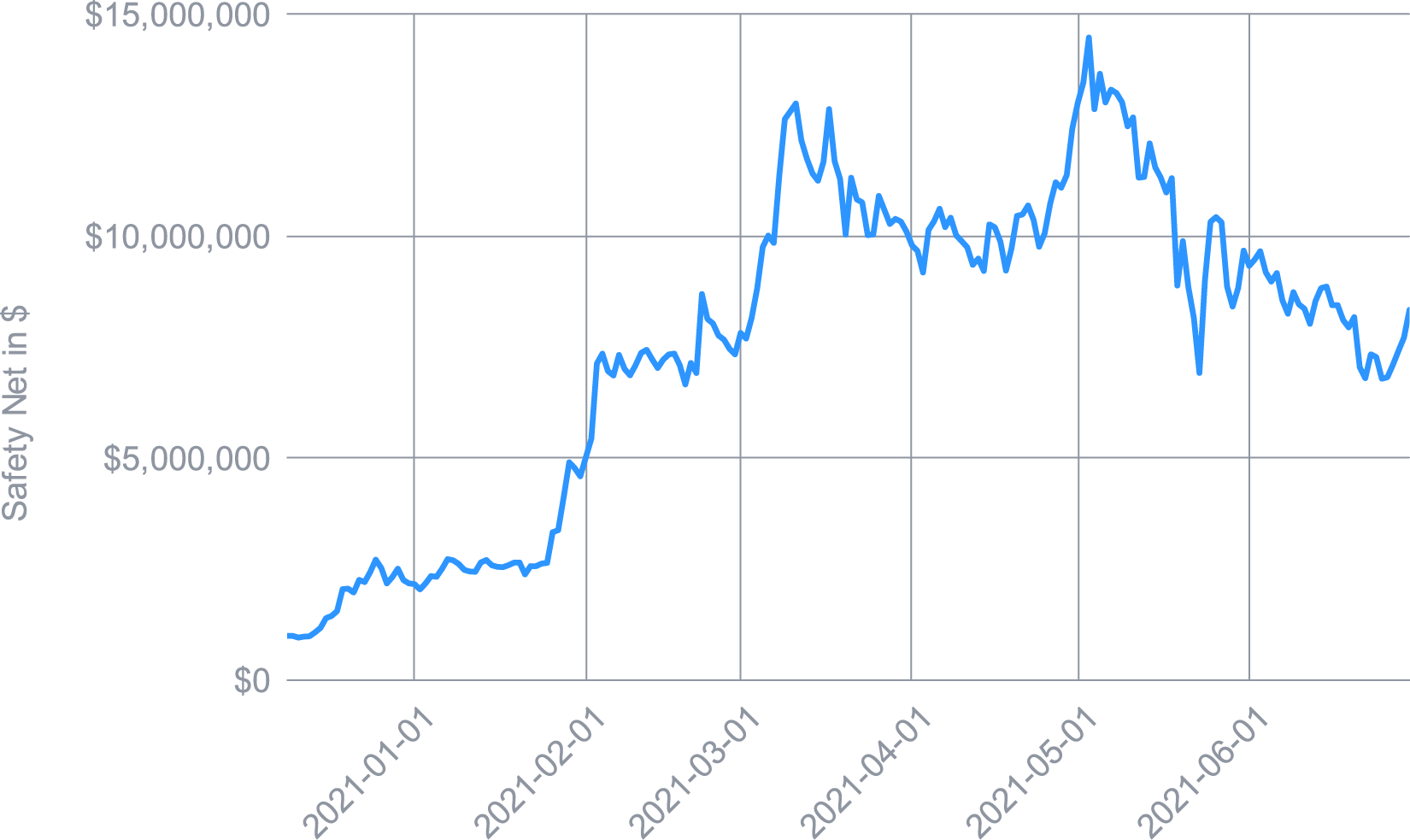 In June, the Iron Finance protocol was a victim of a sophisticated economical attack. The IRON token, a partial-collateralised stablecoin, lost 25% of its value as a result, which impacted the value of the Smart Yield program. However, the loss was below 0.27% of the program.

As the Iron Finance protocol was rated as a “complex strategy pool”, the strategy optimiser applied conservative risk management to this investment. Thanks to this risk management, the Smart Yield program was able to cover the loss without having to use the Safety Net Program to compensate our users.

Disclaimer: The information contained in or provided from or through this article (the "Article") is for informational purposes only, and does not constitute financial advice, trading advice, or any other type of advice. Neither SwissBorg Solutions OÜ nor its affiliates (“Entities”), make any representation or warranty or guarantee as to the completeness, accuracy, timeliness or suitability of any information contained within any part of the Article, nor to it being free from error. The Entities reserve the right to change any information contained in this Article without restriction or notice. The Entities do not accept any liability (whether in contract, tort or otherwise howsoever and whether or not they have been negligent) for any loss or damage (including, without limitation, loss of profit), which may arise directly or indirectly from use of or reliance on such information and/or from the Article.

Start earning a yield on XRP with SwissBorg!