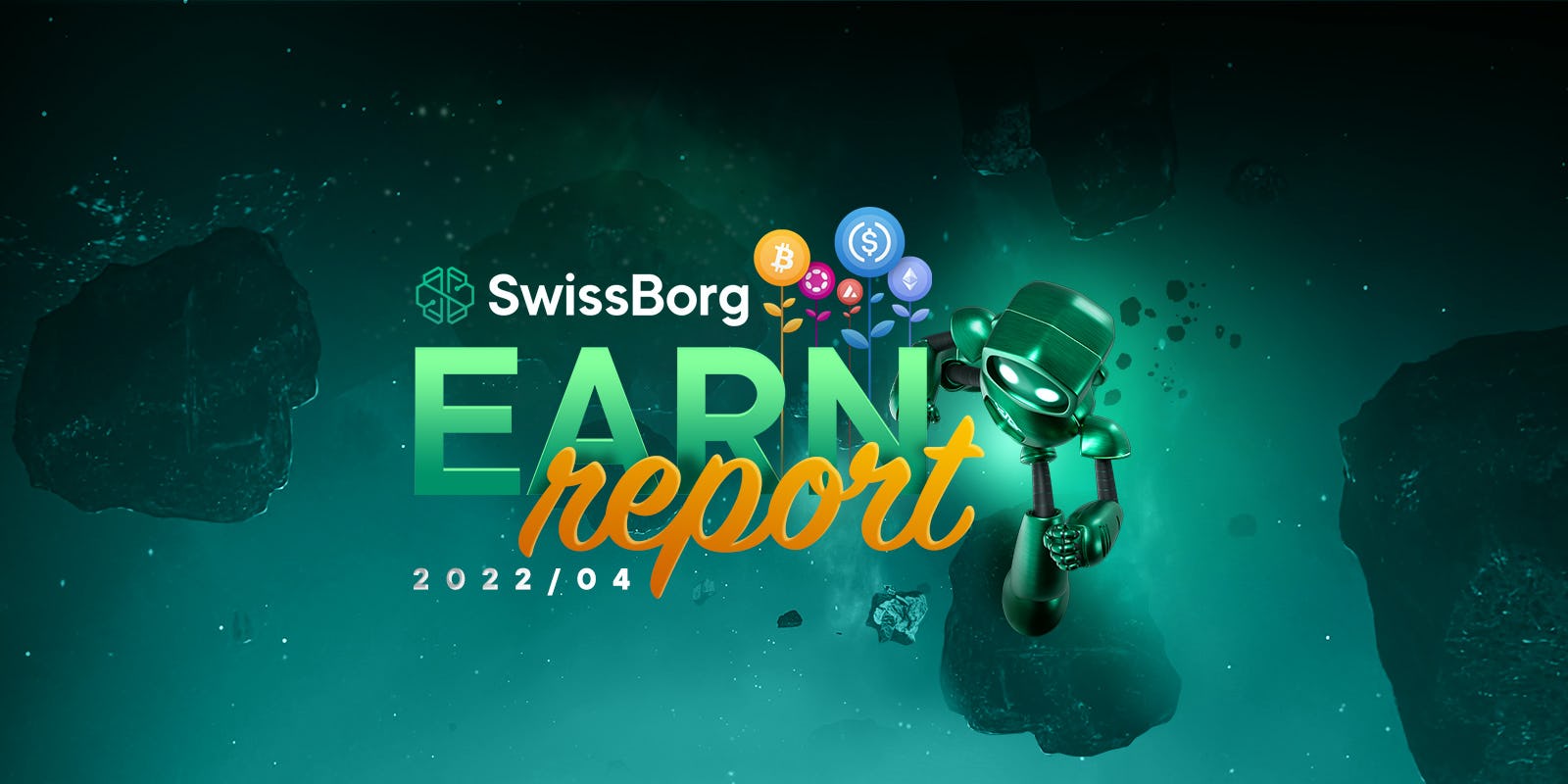 For the sake of transparency towards our community, we aggregate our data to give you a report on the key figures related to SwissBorg’s Earn wallets.

The Earn wallet simplifies and optimises earning a yield on your crypto, every single day. The goal is to find the best return for the lowest risk while offering some of the best yielding conditions available in the market.

The year 2022 has been an eventful one for crypto and these last few months were not an exception. We have seen two major historic crypto events just in the last three months alone! I am talking of course about the ETH merge and the FTX collapse.

The former has been highly anticipated for years and it is a great example of why developers aren’t keen on sharing specific dates. They are difficult to predict, as something often comes in that requires priority attention, postponing the entire process for months, even years.

While the Merge did get postponed for years, the transition itself went smooth. After years of preparation they started off with the testnets until and then finally the mainnet. The team successfully pulled off an extraordinary feat of accomplishment.

Tim Beiko, one of the leading Ethereum developers said, the challenge itself was not getting from proof-of-work to proof-of-stake. It was rather doing so without pausing the entire network; it would be as doing repairs on the engines of the plane… while flying.

More recently, another infamous event has hit the news. I am referring to the FTX collapse that began to unfold on November 6th. It all started when CZ, the CEO of Binance, tweeted that they will be liquidating their FTT reserves. Sam Bankman Fried, CEO of FTX and Alameda claimed that there is no reason to panic and that the user funds are fully backed.

This didn’t do much to prevent the bank run and the FTX soon halted withdrawals causing the price of FTT to crash from $26 before CZ’s tweet to approximately $1.5. A few days later, on November 11th, FTX filed for Chapter 11 bankruptcy. The story didn’t end there; soon after, $600 million of funds were mysteriously drained out of FTX.

Only a few days later, it was announced that the funds were actually transferred to the Securities Commission of the Bahamas. In the shroud of mystery and weird coincidences around this calamity, one thing seems certain. Retail investors are the ones, paying the bill for SBF’s gross misuse of their funds.

The full scope of the FTX contagion is not yet known at the time of writing this. The collateral damage is big, but something that can be overcome. These events set the crypto markets in panic mode, with some projects taking a lion’s share of the beating, just because they were in some shape or form tied to FTX and Alameda. This was by either lending to them or by FTX holding a large bag of their token.

But besides another crypto dip, it is the trust of the ordinary Joe that needlessly took a hit due to a few bad apples. FTX and Alameda took users' funds and borrowed heavily against it. This is something completely unheard of as an exchange should keep the funds safe, fully backed and completely separate from its own. Luckily with SwissBorg, you can always be sure that your crypto assets are safely stored and fully separate from the company assets.

To finish on a positive note, I want to touch on the launch of HedgeFarm, a DeFi protocol incubated at SwissBorg. These days in DeFi, it takes a lot of creativity to find a sustainable, high and safe yield at the same time. They released their first vault with a 28-day epoch.

The team is clearly SwissBorg schooled as transparency is their virtue. The specifications of the vault are clearly specified, something that may seem obvious but it is in fact rarely found in DeFi. The vault consists of 2 strategies; 80% of the assets are yielded safely, while up to 20% is used to generate returns by algorithmic trading. They offer up to 95% capital protection.

We are looking forward to seeing what their next vault will bring. Our goal is to offer HedgeFarm opportunities in the SwissBorg app, after a minor update, that will make us technically compatible.

The following table has been changed to reflect the last 3 months’ yield change (in this specific case September, October and November). The number of users and the total amount in the Earn program are computed at the end of the period and includes all yield wallets (Core and Satellite). 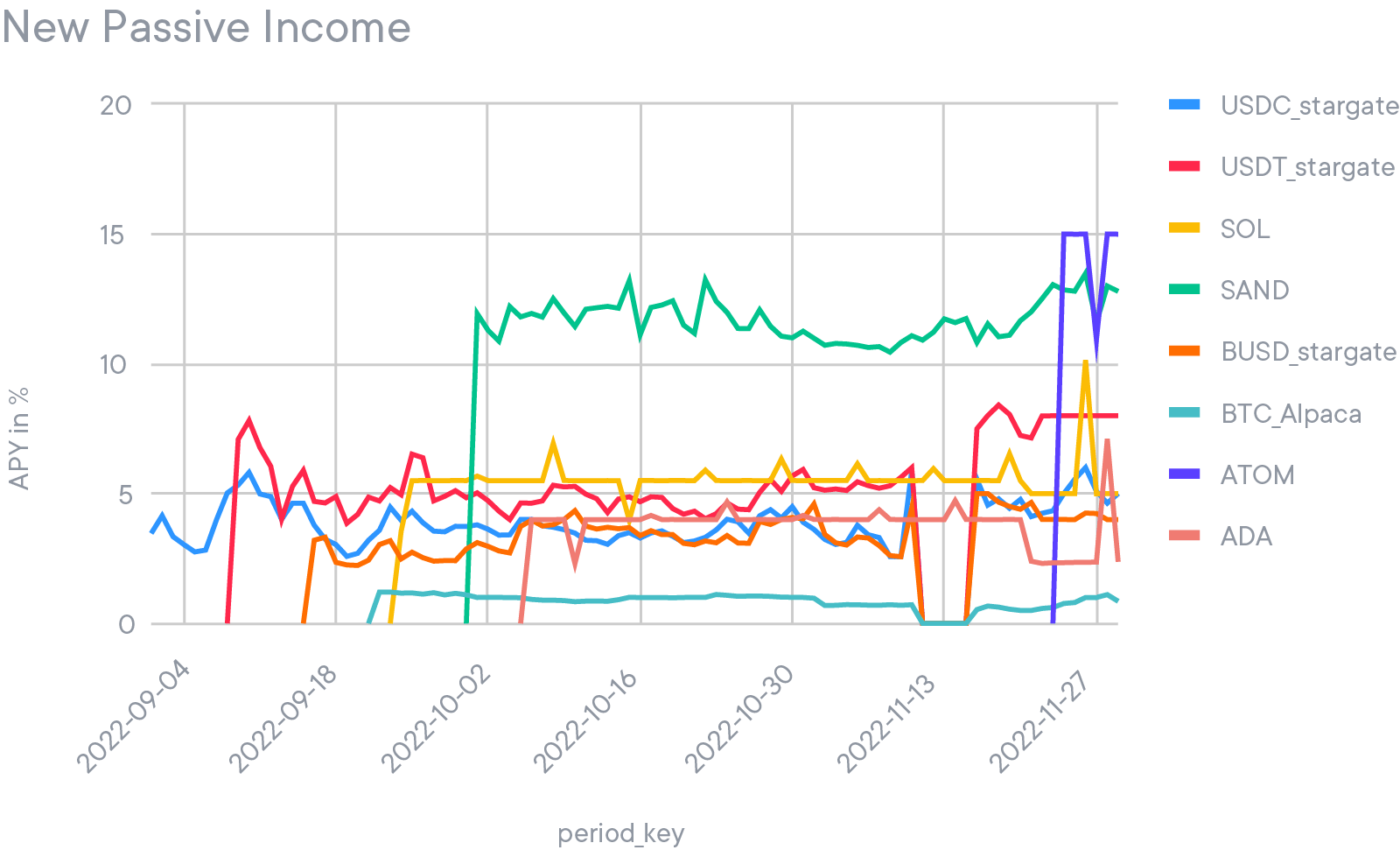 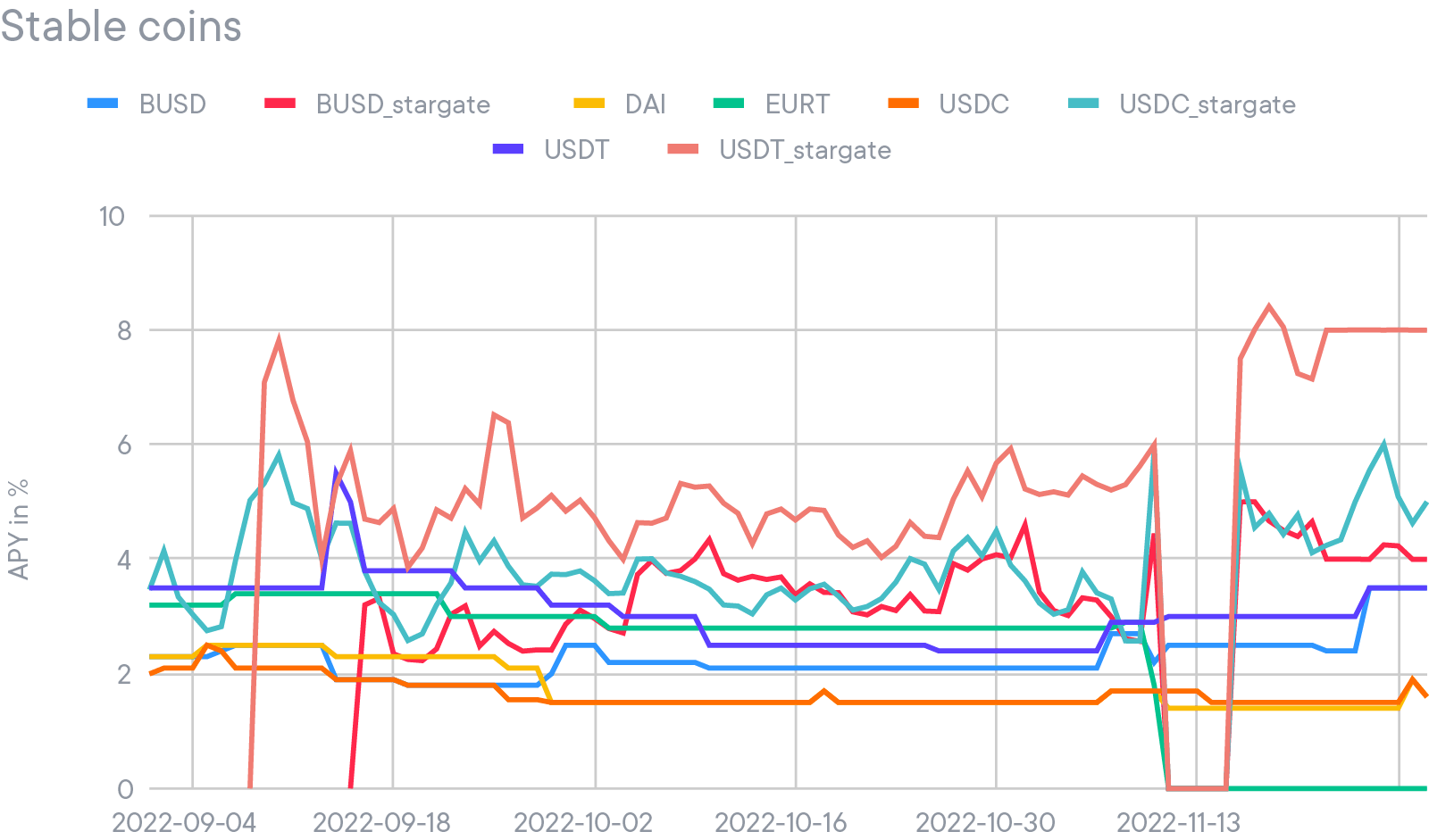 The USDC satellite strat counts a total of 1,316 users, the BTC 4,471 users and the USDT 1,051 users. The share of the wallet was split in the following manner at the end of the month of November. 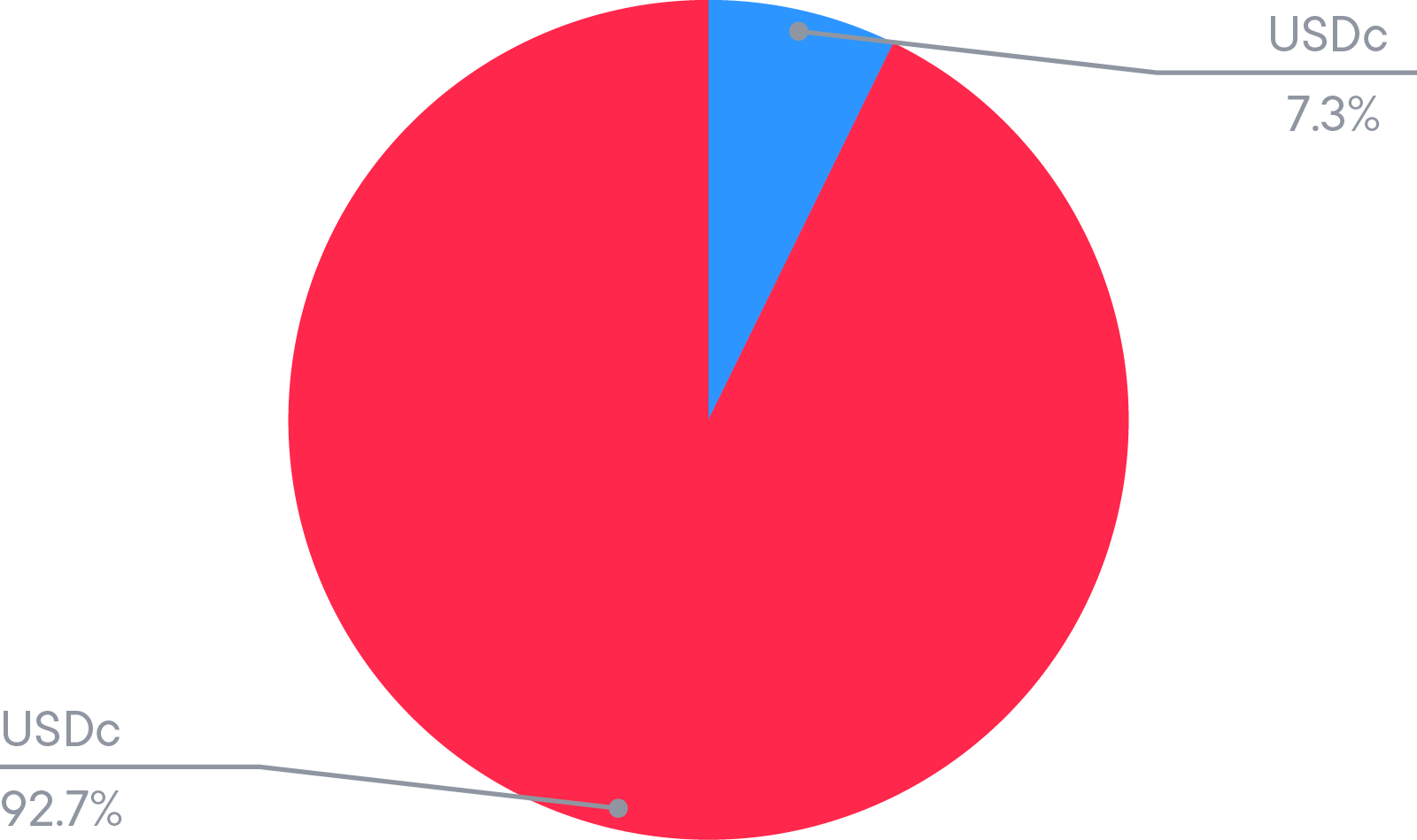 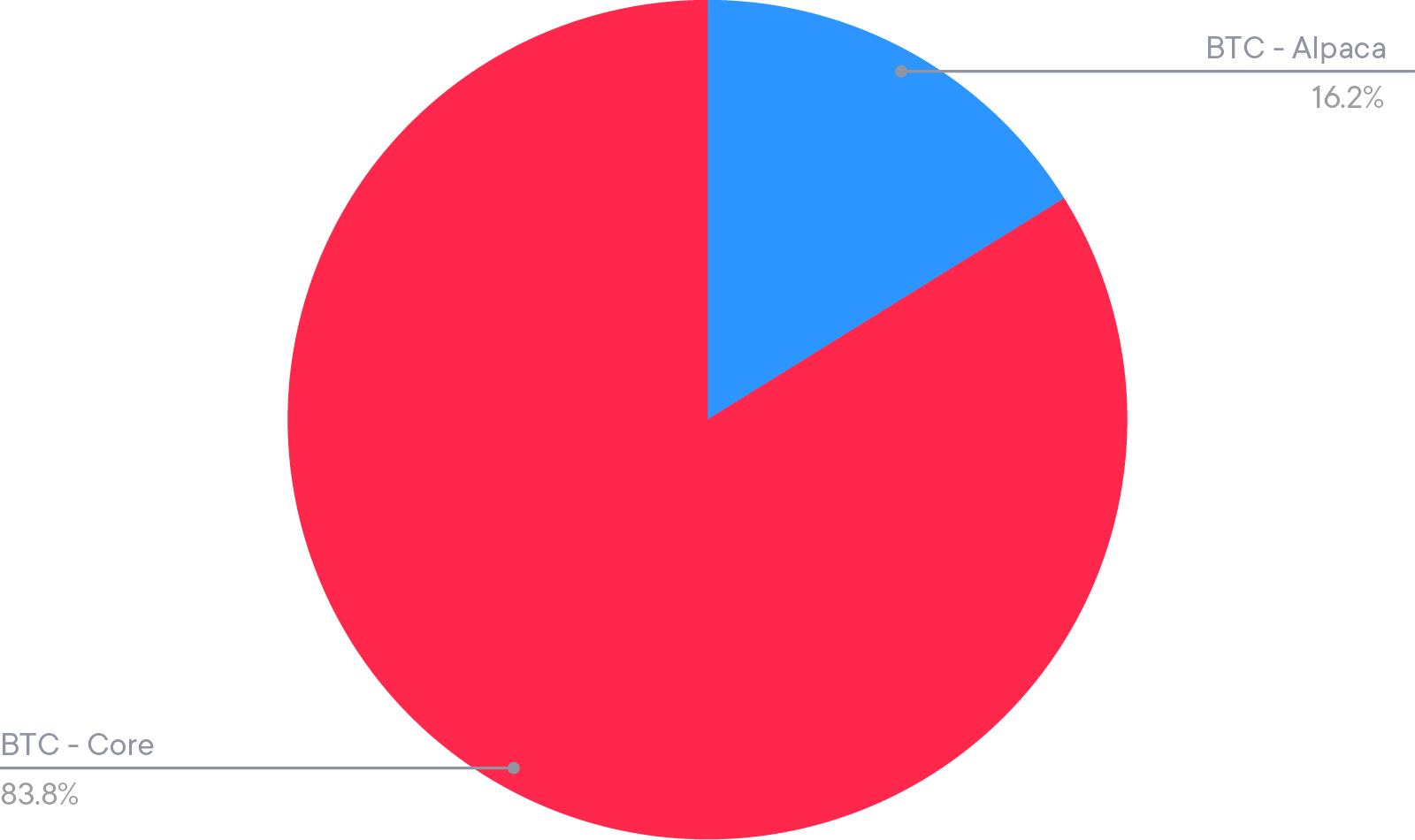 All the strategies are now transparently available directly into the Earn wallets. The protocols used for each wallet are described as well as the strategy type and yield frequency. For a detailed analysis, each protocol has its own dedicated article explaining the mechanisms of each protocol.

Since the last Yield Report, new Earn strategies have been released. The related articles can be found on the blog: