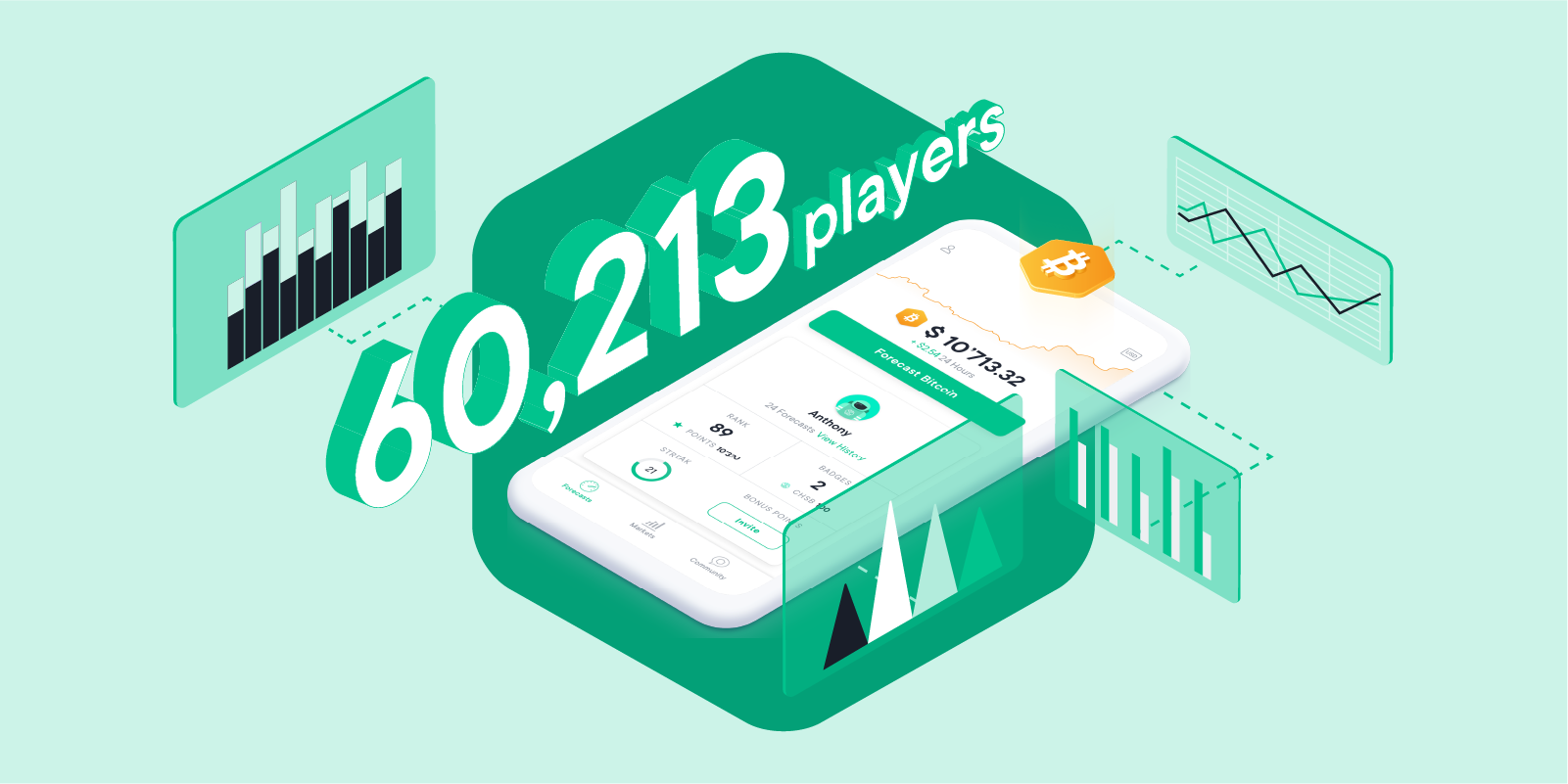 We are proud to announce that we have just experienced the month with the greatest growth since the launch of the Community App with more than 15,000 new players registered to reach the symbolic 60,000 player mark today.

While alpha testing of the Wealth App is underway, we want to thank you for having made more than 1 million forecasts since the beginning of the game. At this rate, the 2 million forecasts, we originally aimed for, are well within reach!

In addition, we have registered record levels of activity (presented below) despite the fact that, in this most volatile time for the market, the community has never had so much difficulty predicting the price of Bitcoin!

In this report, you will discover additional statistics and, above all,  why the competition has never been so tight!

A message from our CyBorg predictor for you, humans: “You’re gonna let me beat you at forecasting?”
‍

The community is in the red...

It is true that the price of Bitcoin has a general upward trend but, like any asset, there are periods of corrections and a downward trend. It seems that the community is not entirely of this opinion because more than 65% of the forecasts have been betting on the rise of the price of Bitcoin in the current bear market!

This is the reason why the community as a whole has lost so many points...so many points that the total number of points in million (as shown below) is now negative since the beginning of the game!

This has the effect of tightening the competition even more and the leaders have lost a lot of points as shown in the next section.

The situation today is the same as that observed more than 5 months ago!

Tip: Read the Daily Bitcoin Analysis in the Learn Tab every day to make the best possible decision for your forecasts! The DBA readers managed to limit the damage and took the lead as shown below.

The CyBorg Predictor rises in the ranking...

With the violent movements observed this month, the CyBorg predictor has reduced its risk and limited its number of forecasts to move up in the ranking. Today, it is in the top 150 of the best forecasters with 150'000 pts and beats more than 99.8% of the players. Despite this good performance, it failed to increase his number of points because the algorithm is more efficient in a bull market with a clear trend but it has especially limited the damage compared to human players. Learn from Cyborg but do not allow the machine to win over humanity!

One million forecasts and record activity

Incredible, you've done it! More than a million forecasts since the beginning of the game. As shown below, growth has been very strong in recent weeks.

Forecasts are worth more and more with the tightening of the ranking and the number of players increasing.

In addition to this amazing milestone, the number of unique activities has exploded, be it for forecasts, the use of our interactive charts or daily bitcoin analysis. We are proud to see that retention is significantly higher than industry standards thanks to our amazing growing community.

Tip: Login every day to earn more points for your forecasts!