Why we’re bullish on Ethereum 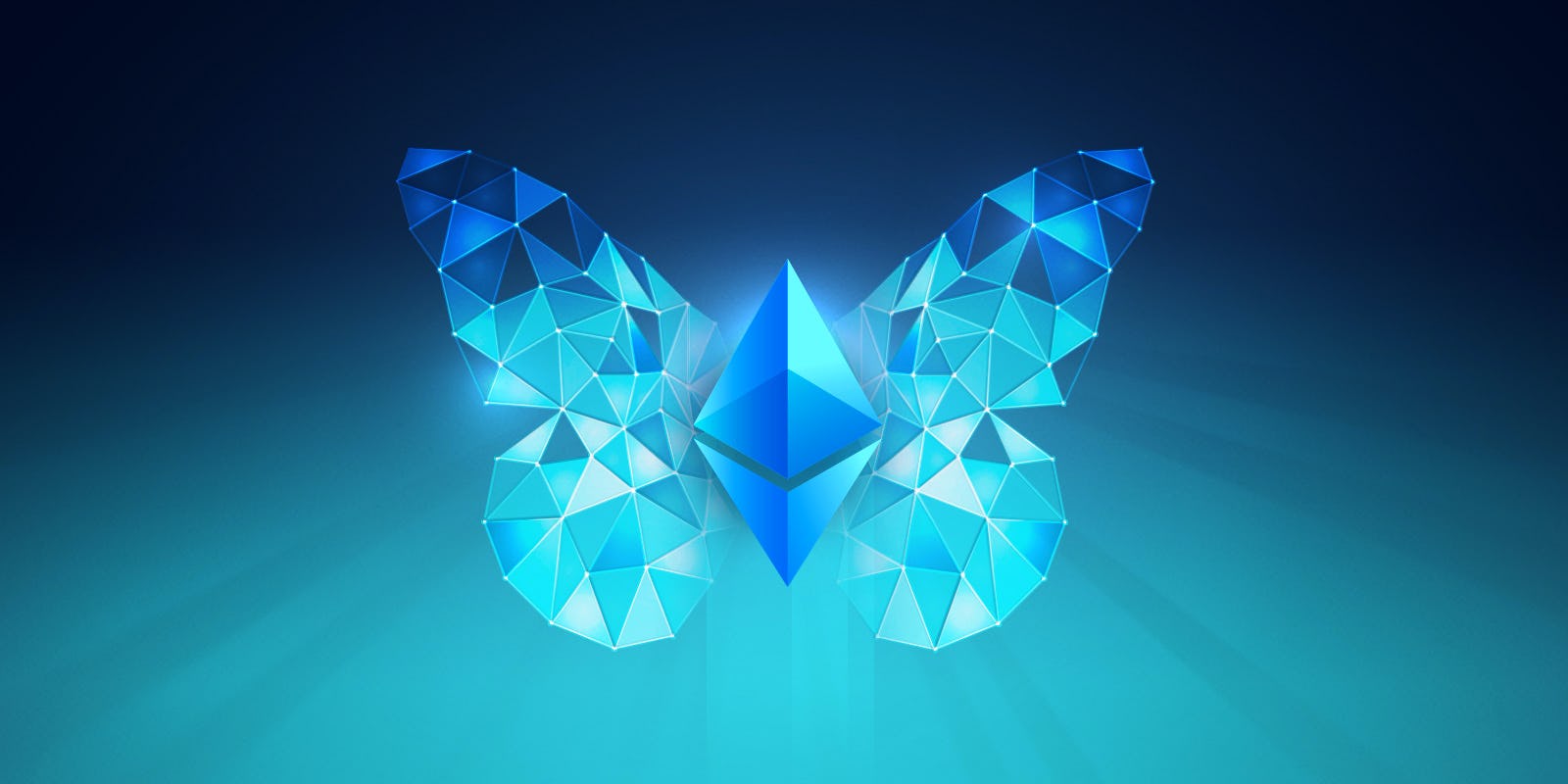 After the recent successful moves toward ‘The Merge’, we SwissBorgers are even more confident that Ethereum has a bright future, despite the current ebbs and flows of the market. Here’s why.

This new Proof-of-Stake (PoS) Ethereum is projected to be ​​approximately 2,000 times more efficient than the old rusty Proof-of-Work (PoW) version. Assuming sharding is up and running, energy usage for a typical transaction will drop from about 84,000 watt-hours (Wh) to only 35 Wh – about 3.5 hours on your laptop – according to this Ethereum Foundation article. The foundation also states that, in terms of CO2 production, the average emission will drop from today’s 119.93  kilograms to a minuscule 0.07 kilograms per transaction, outperforming Bitcoin’s emissions by a factor of over 15,000x!

This change would vastly outperform even Visa’s transaction power usage and emissions, setting the stage for crypto to enter a new world of possibilities.

PoS: A new deflationary paradigm where anyone can earn consensus rewards

In terms of tokenomics, the significant reduction in ETH issuance to miners, combined with the network’s burning of transaction fees since the inception of EIP-1559 last August, has led experts to state that after The Merge, Ethereum will become deflationary.

When Proof-of-Stake is in play, network rewards will go to the stakers securing the network, meaning anyone will be able to join the consensus mechanism and earn staking rewards.This is in stark contrast to Proof of Work, which only pays miners who have vast rows of ASICS humming away in far away places.

This is a great achievement in the move towards equal access to consensus rewards and a major step forward in the creation of a truly decentralised world, where anyone can benefit from contributing to a network without owning and running expensive hardware. This is a drastic change insofar as it will be mainly long-term retail holders who will be rewarded, making the case for a bullish view on Ether by increasing the likelihood that rewards are moved back into staking, in turn supporting price stability and liquidity.

When EIP-1559 came online last summer, it created a deflationary effect by starting to burn about 85% the gas fees charged for network usage, drastically diminishing the money creation. It is estimated that 2 million ETH have already been burned, representing about 1.6% of the total so far. That’s a big bag.

The rate of Ether issuance – or money creation – will be dramatically reduced as PoW miners are removed from the network and only stakers are rewarded for producing blocks. Protocol experts estimate a 90% reduction in ETH issuance, equivalent to around three Bitcoin halvings and a monumental change in the economics of Ethereum.

With the end of PoW comes the end of the selling pressure from miners liquidating their earnings into fiat to run their businesses – for rent, electricity, hardware, maintenance costs and sandwiches for the security guards keeping it safe. This represents a significant economic change to the ecosystem as there will be no forced sellers making changes to the price of ETH.

As the new stakers will not need to liquidate their gained ETH to pay for mining rigs maintenance, power, and new lambos, they are more likely to re-stake their ETH profits to receive more ETH, turning Ethereum into more of a stable yielding saving product for long term holders.

We can say the Merge will have a tremendous impact on structural supply and demand and supply forces. Reducing money issuance will have a certain global deflationary effect. When observing this, coupled with the consensus mechanism requiring less hardware and electricity, we argue that the selling pressure from issued money will be even smaller than just the issuance reduction and the incentive to hold, stake and re-stake will be more than ever before.

As anyone who has made an ETH transaction knows, gas fees are both cumbersome and volatile, as they are dependent on the level of demand placed on the network when the transaction takes place. The experts have said that because the throughput on the ETH mainnet will be the same after the merge, gas fees will not change in any significant way either. So what’s the point of all this Ethereum 2.0 stuff if I can’t save some cash when moving my ERC-20 future gems?

This is where the Rollups ‘roll up’ to the party.

Since a transaction is just digital data, instead of submitting each transaction alone and being charged fees, it should be possible to group them up on a layer-2 solution and submit them together, creating more efficiently on the network and saving some of that sweet, sweet ETH.

This is essentially what Rollups do, grouping together – or rolling up – transactions off-chain, performing the transactions, and then submitting the translation data on-chain. This is proving itself and helping scale Ethereum from 45 transactions per second to virtually an infinite number  by aggregating these Rollups.

This greatly reduces gas fees and increases the speed of the network – a win-win-win.

The solution is particularly supported by Vitalik Buterin, one of the founders of Ethereum, who has been strongly advocating for Rollup development.

There are two types of Rollups that can be used with Ethereum: Optimistic Rollups and Zero-Knowledge (ZK) Rollups, some of which are already out and working.

Two of these Rollups that are already deployed and accessible are Optimism and Arbitrum which combined already hold close to $2B total value locked. Major protocols such as Uniswap, Aave and Curve are already present on these layer-2 solutions with some proper acceleration in their adoption being observed.

According to Vitalik’s vision, Optimistic Rollups are great for now, but the future might require solutions more like ZK-Rollups thanks to their cryptographic guarantees and allowances for lower gas fees, higher transactions throughput and fast bridging capabilities.

ZK-Rollup technology has already been developed and tested, most notably with the layer-2 projects dYdX, Sorare and ImmutableX. Those proof-of-concepts are paving the way for an eventual public ZK-Rollup layer-2 solution.

In the meantime, StarkWare just raised $100M at an $8B valuation, so we can project that it is only a matter of months before this becomes a reality.

Low gas fees on a scalable Ethereum is happening, people!

When considering the giant reduction in energy usage and CO2 production, the new deflationary attributes, and the wicked cool tech ‘rolling up’ efficiency, Ethereum has never looked better and stronger than it does now. Witnessing the revitalisation of the world’s leading smart contract platform into a newer, competitive solution capable of taking on similar global networks and improving on them, we at SwissBorg see fire in Ether’s eyes as it starts its run toward the red challenges of the future.

Disclaimer: The information contained in or provided from or through this article (the "Article") is not intended to be and does not constitute financial advice, trading advice, or any other type of advice, and should not be interpreted or understood as any form of promotion, recommendation, inducement, offer or invitation to (i) buy or sell any product, (ii) carry out transactions, or (iii) engage in any other legal transaction. This article should be considered as marketing material and not as the result of financial research/independent investments.

Neither SBorg SA nor its affiliates (“Entities”) make any representation or warranty or guarantee as to the completeness, accuracy, timeliness or suitability of any information contained within any part of the Article, nor to it being free from error. The Entities reserve the right to change any information contained in this Article without restriction or notice. The Entities do not accept any liability (whether in contract, tort or otherwise howsoever and whether or not they have been negligent) for any loss or damage (including, without limitation, loss of profit), which may arise directly or indirectly from use of or reliance on such information and/or from the Article.

Invest in Ethereum with the SwissBorg app!

The Ropsten Merge: Another Successful Episode in the Ethereum Odyssey