Bulls and bears explained: Your simple guide to understanding the market 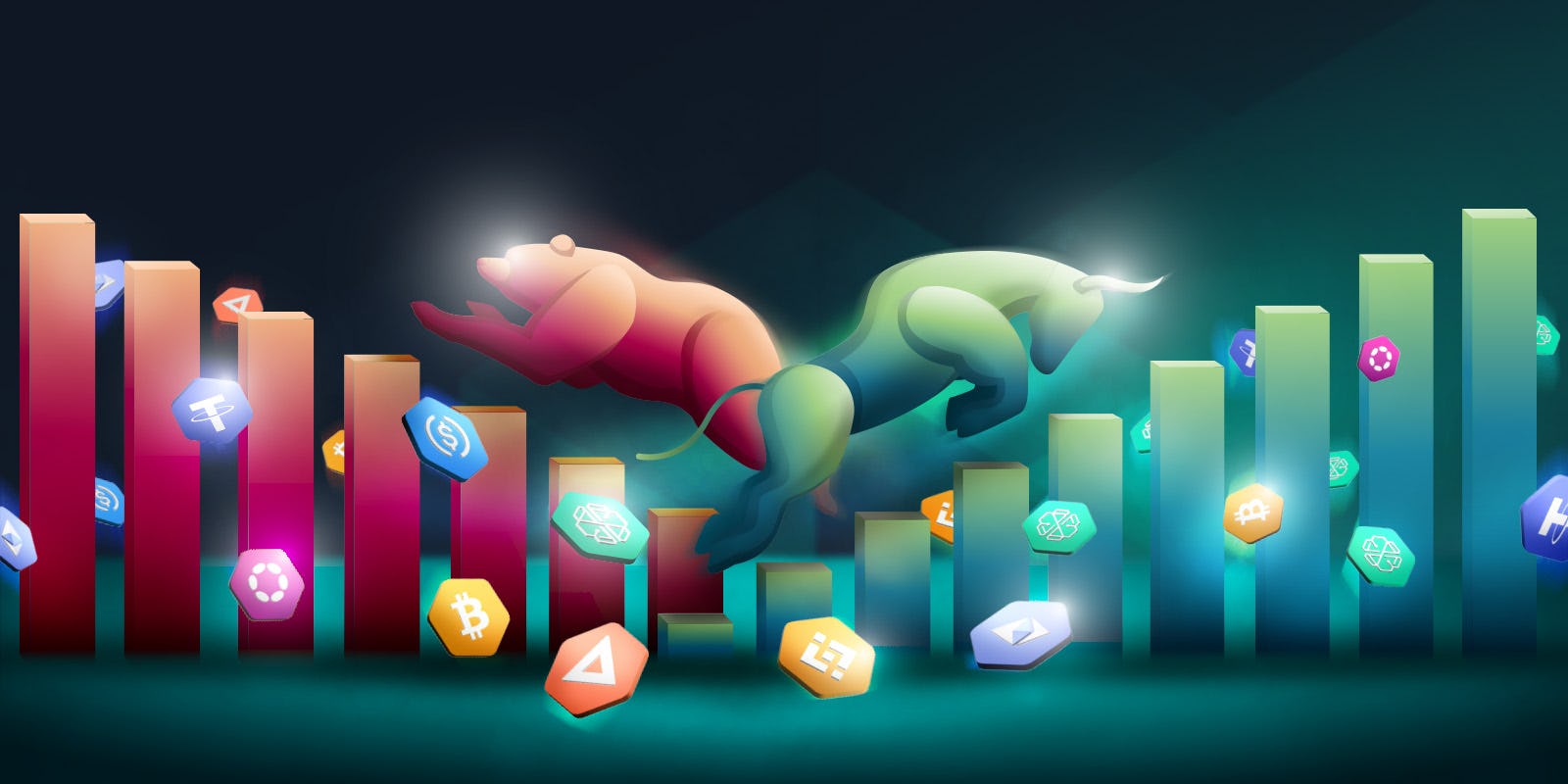 Bulls and bears, you've known about them since childhood bedtime stories, but now, when you are an adult responsible for making your own investment decisions, these two animals mean something entirely different and serve as representations of market sentiment and the state of the economy.

When investing, being able to tell the difference between or, better yet, predict a bull or bear market is crucial for increasing your profits and minimising your losses. Unfortunately, many novice investors lack the knowledge of what a bull and bear market really is.

In this article, we will cover both bull and bear markets, how to approach them, as well as what you can expect to see during each.

But, read with caution, as the information provided might turn you into a real bull and bear markets expert.

The origin of the bull and bear symbolism?

Before getting into too many details, it's important to explain why these animals became the symbols of two market sentiments.

In finance, a bull is used to describe a market on an upward trend as the trend resembles the fighting style of bulls - charging with their head down only to lift it in an attack.

On the other hand, during a fight, a bear faces downward, the same direction a bearish trend takes.

What is a bull market?

A bull market is a market characterised by prices on a sustained upward trend. During a bull market, demand outweighs supply as market confidence is high, and the majority of investors are confidently buying assets as well as making long-term investments since they believe in the growth of the market.

Economies thrive when the market is bullish, leading to higher employment rates and more spending.

A good indicator of the start of a bull market is the optimistic behaviour of investors, along with an increase in prices.

To get a sense of the level of optimism (or pessimism) in investors, you can use the fear & greed index. Platforms such as Alternative.me show and regularly update this index for Bitcoin and other large cryptocurrencies. The numbers they show are based on emotions and sentiments from different sources.

However, to be certain that you are in a bull market, you should look for a 20% or more market rise lasting at least two months. This recommendation is based on the bull market definition by the U.S. Securities and Exchange Commission.

It's important not to rush into thinking that what you are seeing is a bull market, as market corrections and short trends could deceive you.

So, what is a good example of a bull market? 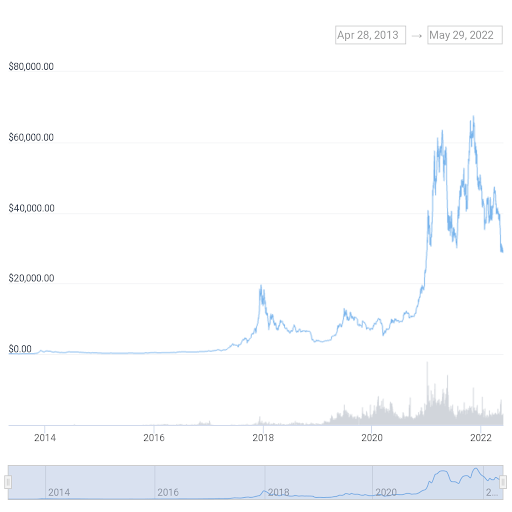 The period from December 2020 to November 2021 is a great representation of a bull crypto market.

What is a bear market?

In contrast to the 20% growth over at least two months seen in bull markets, a bear market entails a drop of 20% or more.

During a bear market, investors are pessimistic and want to sell, causing supply to outweigh demand and prices to drop. Funds are lost in times like these, and the economy, in general, is regarded as bad.

Although some benefit from a bear market through short stock trading, many suffer as unemployment rises and the economy slows down.

A bear market can also indicate a long period of negative growth, better known as a recession.

Can there be a "deceiving" market?

When trying to predict whether a bull or bear market is coming, you have to keep in mind that not all long market movements signal one or the other.

You see, periods of stagnation are also possible. In them, the market is trying to find direction and many upward and downward movements that happen simply cancel each other out, resulting in a flat market trend.

If you jump to a conclusion and mistake a flat market trend for a bullish or bearish one, bad investment decisions are bound to happen.

What to expect during bull and bear markets?

Investors have a lead role in influencing market movement as there is no market without investors. And while we can never be 100% certain how investors will behave and how that will affect the market, we can try to predict using "formulas":

It's important to point out that each investor has their own sentiment towards the market that may or may not match the sentiment other investors hold, and thus a different reaction.

Terms like FUD (fear, uncertainty, and doubt) and FOMO (fear of missing out) are often used to describe these sentiments.

A great example of FOMO in action is the price of Doge pumping following a tweet from Elon Musk in April 2021. The now legendary tweet "Doge Barking at the Moon", with 47k retweets, took the price of Doge from $0.02 to $0.6.

In a FOMO driven market, sentiment is positive, and investors willingly participate in hopes of obtaining a profit. But, when there is FUD, investors begin to move their funds out of the market as their confidence dips during times of price decline.

Bull and bear markets have a strong link to the economy.

A bear market reflects a weak economy, and when the economy is weak, businesses have lower profits because consumers are not spending nearly enough. This decline in profits directly affects the way the market values stocks.

In 2020, due to COVID 19, we saw a bear market and quite a few negative economic events as well as turbulence in financial markets worldwide.

In a bull market, the opposite happens. People have more money and are willing to spend it. This drives and strengthens the economy.

A bull versus a bear market

As we have already established, a bull and a bear market are polar opposites. In a bull market, there is usually a rise in the number of new projects launched. For instance, the bull market of 2021 saw over 14.7 million blockchain transactions on the Binance Smart Chain network alone.

That being said, with a bull market come lots of pump and dump projects as well. So, in 2021, rug pulls accounted for 37% of crypto scams and $2.8B worth of cryptocurrency stolen. 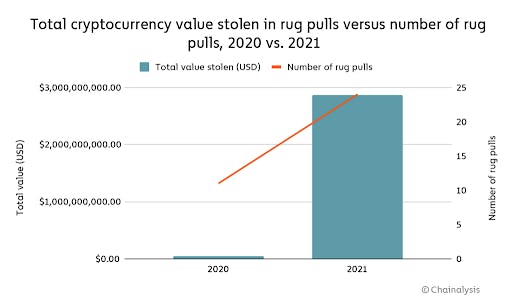 Total cryptocurrency value stolen in rug pulls versus number of rug pulls, 2020 vs. 2021

During a bear market, the amount of funds pouring in is minimal, but the bad press is in abundance.

Still, not all is bad, even during a bear market. Attesting to this is the fact that in the bear market of 2018, Ripple created several partnerships, including partnerships with 3 of the top 5 global money transfer companies and launched a new venture called Xpring to incubate projects.

Stellar also shined in this time, enabling cross-border payments for over 70 countries and partnering up with many companies.

How do you invest in bull and bear markets?

A bull and a bear market can't be approached the same way as their conditions differ greatly.

In a bull market, it's crucial to get in at the start and sell before the peak. You can be quite relaxed as market losses are small and the possibility of making a return is higher. So, if you want to dabble in some volatile assets, a bull market is the time to do it.

When it comes to bear markers, suffering a loss is more likely, so you would want to go for safer investment options such as short term trading, staking/lending/borrowing of stablecoins, and so on.

A bear market is also a good time to buy profitable assets you plan to hold for the long term. But, when doing so, be wary of bear traps - sharp declines in the market that force participants to sell ahead of a reversal.

Whether the market is bullish or bearish, making smart investments is a must. This is especially true for investments in crypto assets as they are very volatile. On top of that, without the right tools, investing in crypto can be a complicated process requiring the use of multiple platforms, all showing different prices and with their own KYC requirements.

At SwissBorg, we believe that this process should be a simple one and that everyone should be able to invest in crypto the smart way. That is why, through our app, we facilitate the buying, selling, and trading of cryptocurrencies with 16 fiats.

Exchanges are done in milliseconds, and you get a transparent overview of each one - no fees are ever hidden.

You also receive detailed portfolio analytics and can put the assets from your portfolio into SwissBorg's Smart Yield wallets to earn a yield every day.

Like it or not, your portfolio will be affected by both a bear and a bull market.

To predict market behaviour, paying attention to the market's history will help. Also, based on indicators such as the fear & greed index, news, and information from trusted sources, you can prepare to either buy or sell ahead of a bullish or bearish trend.

So, while you cannot avoid either a bull or a bear market, you can use your skills and research to take advantage of them or minimise your losses.

Disclaimer: The information contained in or provided from or through this article (the "Article") is not intended to be and does not constitute financial advice, trading advice, or any other type of advice, and should not be interpreted or understood as any form of promotion, recommendation, inducement, offer or invitation to (i) buy or sell any product, (ii) carry out transactions, or (iii) engage in any other legal transaction. This article should be considered as marketing material and not as the result of financial research/independent investments.

Neither SBorg SA nor its affiliates (“Entities”) make any representation or warranty or guarantee as to the completeness, accuracy, timeliness or suitability of any information contained within any part of the Article, nor to it being free from error. The Entities reserve the right to change any information contained in this Article without restriction or notice. The Entities do not accept any liability (whether in contract, tort or otherwise howsoever and whether or not they have been negligent) for any loss or damage (including, without limitation, loss of profit), which may arise directly or indirectly from use of or reliance on such information and/or from the Article.

A closer look into USDT (Tether) and its risks