Binance Smart Chain vs Ethereum: Who will be crowned the best platform for decentralised applications? 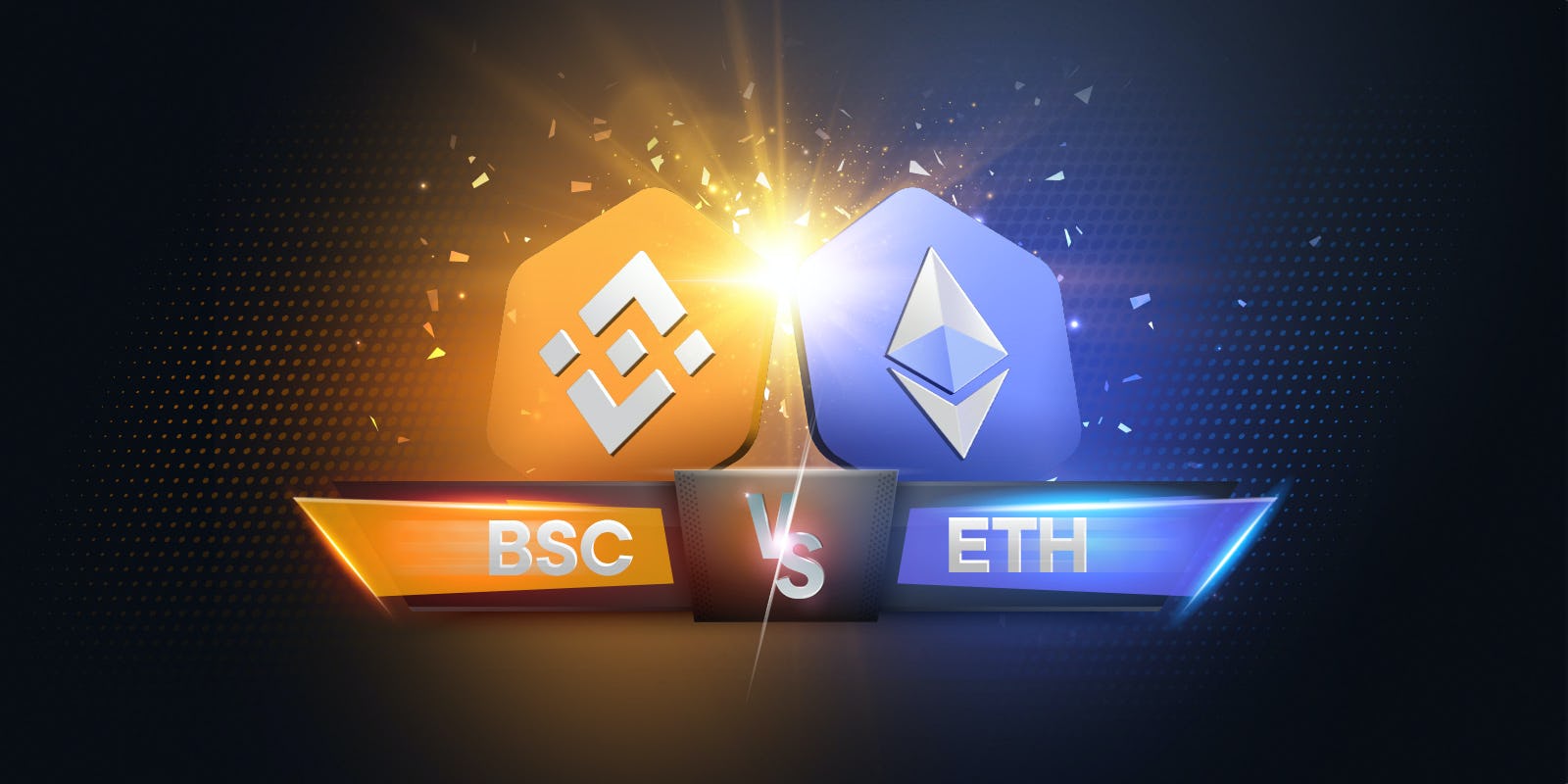 The debate on Binance Smart Chain (BSC) vs Ethereum is a long fiery one that never seems to end in declaring the superior of the two blockchains. But why? Are BSC and Ethereum so similar? Or is one supposed to just support the other?

These and other questions surrounding the topic will be addressed in this article to help you pick the best platform for decentralised applications that will fit your preferences.

But first, let's get to know both BSC and Ethereum.

Ethereum is a pretty big name in the crypto world. So big that saying only that might even be considered an understatement as the only cryptocurrency beating Ethereum in terms of market value is Bitcoin.

The Ethereum platform is powered by blockchain technology, and exactly that is what makes it so secure. It has a native currency called Ether (ETH) which is often found in newbie and professional crypto portfolios.

Ethereum is particularly famous for computer programs called smart contracts that originated on the platform and were conceptualised by Vitalik Buterin, one of Ethereum's co-founders. These smart contracts, in combination with blockchain technology, are used in decentralised finance (DeFi) and, of course, decentralised apps (dApps).

Thanks to all the possibilities offered by the platform, Ethereum is heavily used, leading to network congestion and high gas fees. The hefty gas fees, along with scalability issues, are the main reasons behind ETH 2.0, an improved version of the Ethereum blockchain supporting up to 100,000 TPS, but also the emergence of competitors such as BSC.

What is Binance Smart Chain?

BSC was first unveiled in April 2020 but officially launched in September of the same year, around the same time when "DeFi summer" happened - the peak of Ethereum's DeFi boom.

The idea behind BSC was to build a network that would be compatible with the Ethereum Virtual Machine (EVM). Using this compatibility, DeFi developers could easily transfer their applications from Ethereum onto the network and enjoy cheaper gas fees and faster confirmation times. This move is what set the stage for the BSC vs Ethereum showdown we are still witnessing today.

And while Ethereum was undoubtedly the home of major DeFi protocols, BSC gradually started taking away its market share. One example of BSC giving Ethereum a run for its money is November 21 2021, when BSC had a record-breaking 16M+ transactions, making Ethereum's 1.2M+ recorded on the same day look very poor.

Although impressive, BSC, with all of its success and quick growth, was not able to avoid criticism. One of the main arguments against it is that it's just a blatant copy of Ethereum (BSC is a fork of Geth, an Ethereum client) and offers the same service for hosting dApps to developers as a Layer 1 (L1).

Ethereum being the first smart contract platform allowing developers to customise dApps and offer financial applications to users, has a big community that believes the platform is superior to its very similar competitor. But, the vast number of BSC users strongly disagree.

So how do the two compare when looked at side by side?

When determining the competitiveness of a blockchain, three major things are considered: speed, cost and security. This is also known as the scalability trilemma.

If we first take a look at speed, BSC is the clear winner with three-second block times, which look very impressive next to Ethereum's fourteen-second ones.

Cost-wise, BSC again has the upper hand by being cheaper.

Security, though, is where the two blockchains don't even compare, with Ethereum having 300K+ validators and BSC only 21, making BSC essentially pseudo-decentralised.

The scalability trilemma is a good starting point for comparing two blockchains. But when the level of similarity is so high, doing a deep dive into how they stack up against each other in the most important aspects is only fair. So, let's get to it, shall we?

Decentralisation is one of the pillars of blockchain technology, and for a good reason. Without it, a network's security is in jeopardy and achieving a trustless environment is close to impossible. But how decentralised can a network be?

The more nodes involved in validating transactions and block confirmations, the more decentralised a network is.

Still, even without having the coefficient for both networks, it's clear to see that BSC has a long way to go until it reaches Ethereum's level and becomes a truly decentralised network.

Now that we have established how decentralised both networks are, the next most important aspects in the BSC vs ETH comparison are transaction fees and throughput.

Ethereum, with over 3000 dApps, has a throughput of just 15 transactions per second (TPS). This is considered too slow when measured against legacy networks like Visa and Mastercard.

Many argue that this slow transaction processing is a factor that holds back Ethereum's dream of becoming a world computer and leads to high network congestion. As a result, Ethereum suffers from very high transaction fees that can amount to thousands of dollars, making it impossible for the average user to use the network.

Still, despite this big scalability issue, the Ethereum developer community remains firm in not compromising on decentralisation and security for speed. Instead, they continue with development and transition from the Proof-of-Work to the Proof-of-Stake consensus model, which is expected to ease the network's traffic congestion and reduce transaction fees.

Ethereum's rival, BSC, adopted the centralised structure to maintain scalability in terms of increased throughput and lower transaction fees. BSC can handle as much as 300 TPS, and an average transaction costs just a few cents.

BSC's TPS rate positioned it as the prime alternative for users that have been priced out of the Ethereum network.

BSC also allows users to enjoy the same DeFi features with composability and high yield as they do on Ethereum but in a low fee environment. This, unfortunately, came at the expense of true decentralisation.

Developer activity is a great indicator of a healthy and attractive ecosystem.

A report by Electric Capital revealed that the Web3 ecosystem saw 34,000 new developers in 2021, with over 20% joining Ethereum.

The report also compared the number of active BSC and Ethereum developers between December 2020 and December 2021, and the results show Ethereum's clear and strong dominance. Taking into consideration that BSC is still in the early stages when it comes to utility, this doesn't come as such a surprise.

To encourage talent development and developer activity, Changpeng "CZ" Zhao injected about $1B into the Binance ecosystem in mid-October 2021. Despite this generous effort, BSC still had only about 250 active developers per month in 2021.

All in all, first-mover advantage is definitely something that Ethereum enjoys and what leads to its popularity among developers. If we add the planned transition to ETH 2.0 into the equation, BSC might be having an even harder time matching Ethereum's developer activity.

Consensus models play a big role in the security of a blockchain but also in its speed. BSC uses a hybrid of the Proof of Authority (PoA) and Delegated Proof of Stake (DPoS) consensus models, which is called the Proof of Staked Authority (PoSA). By combining the reputation-based consensus algorithm of PoA and the delegation-based voting system of the DPoS, BSC can achieve high throughput and meet users' demands at a low cost.

The PoSA consensus model enables scalability because it requires only 21 validators to run. However, for the same reason, BSC is susceptible to security risks such as the 51% attack and hacking with a few validators.

Having very few validators also means that gatekeepers and central authorities make decisions. In centralised environments like these, chances of unfair treatment like asset seizures and marginalisation are high.

Ethereum and its consensus model is a very hot topic with interest in ETH 2.0 always present. ETH 2.0, in short, represents a transition from Proof of Work to Proof of Stake (PoS). PoS as a consensus model requires node validators to lock up or stake their assets for a chance to produce blocks and process transactions on the network. Validators are disincentivised to act maliciously with a risk of losing their staked assets.

PoS also enables a network to have as many validators as possible and thus makes it less vulnerable to cyberattacks.

Ethereum currently uses the Proof of Work (PoW) consensus model - an energy-intensive consensus model that reduces scalability. But with the planned transition expected to take place in Q2 of 2022, an improvement in scalability and throughput of the Ethereum network will likely happen.

What is not likely is Ethereum being able to match or gain an edge over Binance's centralised PoSA model when it comes to low fees and throughput.

One of the metrics used to measure a network's growth is the total value locked in the protocol. Of course, this is not a stable metric as users are constantly moving value from network to network. Still, TVL serves a purpose in helping us track network activity.

When looking at the two blockchains, Ethereum shows dominance in the DeF‌i ecosystem with over $115.61B in TVL across several EVM-compatible blockchains, while BSC holds a TVL of just $12.71B.

Please keep in mind that the numbers provided are from the time of writing this article and are frequently changing.

The distribution of TVL across ETH and BSC:

The Distribution of TVL across ETH and BSC

A contributing factor to Ethereum's impressive TVL is its ability to leverage several L2 chains to facilitate liquidity and composability, as well as its more robust protocols and higher number of developers in the ecosystem. This, however, is still not enough to stop BSC from outperforming Ethereum in the number of transactions.

As an Ethereum fork, BSC takes advantage of Ethereum developer tools and the vast Binance ecosystem user base to attract DeFi developers looking for a cheaper platform. And while it is often criticised, BSC proves that most users don't care much about hardcore decentralisation, which on Ethereum means paying very high gas fees.

DeFi users looking to farm the best yields or lend on a permissionless platform constantly swarm BSC to get the equivalent of what Ethereum initially and exclusively offered users.

Value also flows easily to BSC from Ethereum, thanks to the "bridges" that allow users to transfer their assets from chain to chain. But it doesn't stop there!

Many CEXes and protocols do not support deposits of non-native assets, mainly due to the lack of integration resources to support every mainnet token out there. However, they can automatically support most BSC network assets by allowing BEP20 deposits. This makes BSC a cheap and fast way to onboard users onto the DeFi ecosystem and provides a plug-and-go system for Binance to meet the demand for crypto native products.

Will Binance Smart Chain replace Ethereum in the future?

Ethereum and BSC are both L1s fighting to prove which will be more robust in the future.

Being the first smart contract platform with network effect and support for other thriving scaling solutions like Polygon, Arbitrum, and Optimism, Ethereum is clearly ahead of the game when it comes to innovation. On the other hand, BSC has realised that it is not just about copying and pasting solutions from its rival to support builders in its ecosystem; it is also about spearheading novel, creative solutions.

To prove its dedication to innovation, BSC has even rebranded to BNB Chain, where the BNB acronym stands for "Build and Build".

The future will, however, have a mix of chains like BSC and Ethereum, which are interoperable and allow the end users to benefit from that.

We are excited to see what the future holds. How about you? Let us know on Twitter!

Invest in BNB and ETH with the SwissBorg app today!

The Community Index is evolving!