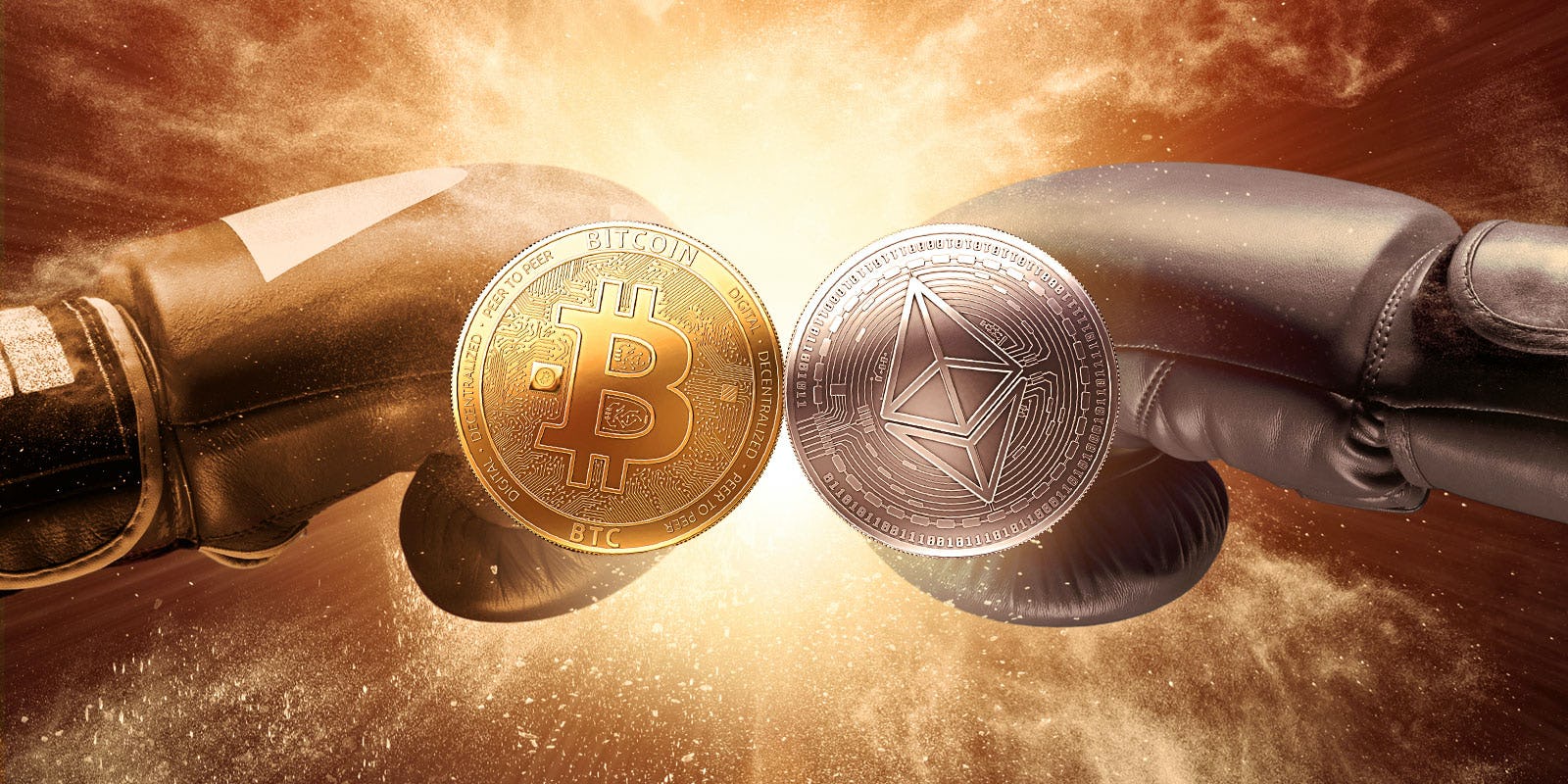 Bitcoin and Ethereum make up at least 65% of the total cryptocurrency market cap. While Bitcoin, the first and most successful cryptocurrency, has broken into the trillion-dollar market cap, Ethereum ranks second, capturing more than 250 billion USD in market capitalisation.

Both investors and the community of cryptocurrency enthusiasts pitch these two against each other, considering their similarities and differences. Bitcoin vs Ethereum, should investors be choosing one over the other or both? Let’s keep it simple and start by establishing some facts.

Bitcoin is the leading cryptocurrency by market cap and attention from both retail and institutional investors. Established in 2009 by a pseudonymous entity called Satoshi Nakamoto, it has gained a reputation as a digital gold in the past few years.

Bitcoin is a form of digital currency not issued by any central government. Instead, it is decentralised, secured, and its transaction broadcast on a cryptographic ledger we have come to know as the blockchain. While some national governments and their regulators continue to debate whether Bitcoin is a currency or asset (mainly for the subject of taxation and other forms of regulation), institutional investors, both private and publicly traded, have continued to pass their vote of confidence on Bitcoin. Notably among these are Microstrategy, Tesla, Square, and Grayscale.

Beyond the currency side of Bitcoin, the developer community found out that they could extend blockchain for other purposes. This brings us to the second largest crypto, Ethereum.

Ethereum was created in 2015 by Vitalik Buterin. Beyond the digital payment function of Bitcoin, Ethereum allows for decentralised applications powered through smart contracts. Programmers could build on the network and host dapps that serve varied purposes like lending and borrowing (what we see in DeFi today), tokenisation of arts and digital products (NFTs), securing public records and much more. Ethereum powers the decentralised finance sector where investors (individuals and corporates) stake over 80 billion USD in various smart contracts.

Traders or investors often come up with metrics as to why Bitcoin is a better option than Ethereum or vice versa. Even with their similarities, they are still very different in many ways.

Differences between Bitcoin and Ethereum

Bitcoin, especially with its rise in value and slow transaction confirmation times (approximately ten minutes), is being touted as a better store of value than means of payment. This is similar to how gold is used as a form of investment - while it could technically be exchanged for goods based on its value, it wouldn’t be practical to use it in this way. Instead, gold investors hold on to the metal to believe that its value will increase, in contrast to fiat currencies that lose value over time due to inflation.

Institutional investors widely adopt Bitcoin because of its relative price stability compared to other cryptocurrencies like Ethereum. I mentioned earlier that Microstrategy, Tesla, Square etc., have all added Bitcoin to their balance sheets. A large market cap introduces some form of stability in Bitcoin, making it more attractive to large corporations and high-net-worth individuals.

Finally, the programmability of the Ethereum network is mainly responsible for the mesmerising exploration of the new frontiers around the boundaries of decentralised finance that we see today. DeFi has grown past 100 billion USD as an industry, and it looks like we haven’t even scratched the surface. Chainlink’s Co-founder and CEO opines that the DeFi industry could be worth over 500 billion USD in the coming years. And while non-fungible tokens (NFTs) are gaining mainstream attention, real-world assets’ tokenisation is another frontier yet to be fully explored. Ethereum is undoubtedly leading the charge here.

Should you buy Bitcoin or Ethereum?

There are no one-size-fits-all answers to this question. As an investor looking to invest in either Bitcoin or Ethereum, it all boils down to your risk profile. With the bull run of 2020 not losing steam in 2021, there are wild predictions around the price of Bitcoin and Ethereum, not to mention other cryptocurrencies like CHSB, Chainlink, Cardano, Aave, etc.

Experts such as Ryan Watkin of Messari Crypto thinks Bitcoin’s price could grow, even more, reaching between 100,000 USD and 150,000 USD before the year-end. That will be around a 2.4 times increase from its current price at 62,000 USD.

Regarding Ethereum, many experts such as Watkins and others think Ethereum could reach up to 10,000 USD by the end of the year. Going by that forecast, Ethereum’s value would be four times. So the experts agree that both of the leading cryptos have room to grow.

Notably, the world of investment in cryptocurrencies shouldn’t just be concerned with Bitcoin vs Ethereum. As a cryptocurrency trader and investor, looking into other alts should be considered as well. After all, a balanced cryptocurrency investment portfolio should include a mix of BTC, ETH and other altcoins.

On the premise of considering other cryptocurrencies, a look at SwissBorg shows that the CHSB token had appreciated over 7,650% within the last 12 months, i.e. from less than 0.02 USD - 1.53 USD in March 2021. This shows just how insane alts’ growth can be, and it means that investors who are fixed only on Bitcoin or Ethereum could miss out. And that’s not all. SwissBorg periodically performs Protect & Burns, a deflationary practice by the SwissBorg team on the token price. With Protect & Burn, the team rewards long-term CHSB holders by placing orders to buy back and burn only when the token price goes down. Having conducted series of Protect & Burns, the team found that CHSB’s price rose following 77% of burns, demonstrating the benefits of this approach.

And this is just beaming our searchlights on CHSB. There are many other cryptos with great potential, including the 14 listed in the SwissBorg’s app. Consequently, an investor or trader looking to maximise their gains within the crypto space needn’t just focus on Bitcoin vs Ethereum. Other cryptos may even surpass these two in price appreciation.

The risks of crypto investing

It’s the old rule of investment never to invest more than you’re willing to lose. Cryptocurrencies can be highly volatile, with prices jiving up and down in a single day. Even Bitcoin, which is somewhat the most “stable” cryptocurrency (this isn’t including stablecoins pegged to fiat currencies), is not immune to extreme volatility. Not too long ago, Bitcoin lost roughly 50% of its price during the infamous black Tuesday global COVID market crash. Other alts can even be more notorious. Some cryptos dump and never recover. It’s therefore imperative to understand these risks before venturing.

However, asides from these risks of volatility, cryptocurrencies are becoming an investment mainstay and have continued to shape the frontier of digital finance. Many other cryptos, asides from Bitcoin and Ethereum, will play a massive role in this era.

Ready to start making your crypto work for you?